Comments (0)
Add to wishlistDelete from wishlist
Cite this document
Summary
The case study is about an incident where a guy named Frank has gone to a part with her girlfriend June. Another guy Peter kisses June on her mount (seems without her consent) and touches her breasts. June suddenly pushes him away. Seeing this, Frank rage reaches its peak…
Download full paperFile format: .doc, available for editing
HIDE THIS PAPERGRAB THE BEST PAPER93.9% of users find it useful 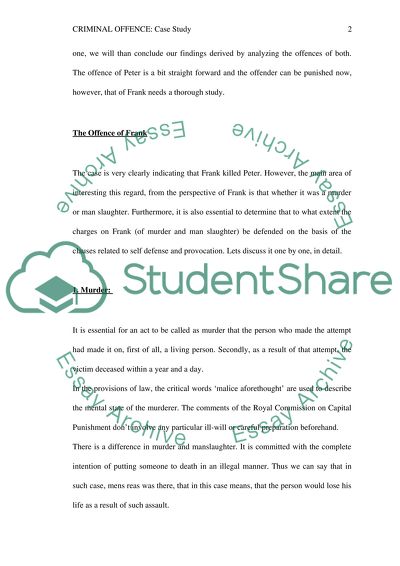 Download file to see previous pages The first one is Peter, who tried to force himself on the girl and kissed her and fondled her breast, without her consent. While, Frank is also an offender murdered and man slaughtered.
The offence of Peter should be discussed according to the Sexual Offence Act 2003. This law explains that a person who touches somebody without other person's consent with the intention of sexual desire is to be dealt under this act. (Sexual Offences Act 2003). Under this act, a person who is convict of sexual offence can be sentenced for six months or be fined or both of the sentences.
So far as Frank is concerned, he seems to be convict murder and manslaughter. However, his defense can try to defend him on the grounds of self-defence and provocation. After discussing the criminal offence committed by both of them, one by one, we will than conclude our findings derived by analyzing the offences of both. The offence of Peter is a bit straight forward and the offender can be punished now, however, that of Frank needs a thorough study.
The case is very clearly indicating that Frank killed Peter. However, the main area of interesting this regard, from the perspective of Frank is that whether it was a murder or man slaughter. Furthermore, it is also essential to determine that to what extent the charges on Frank (of murder and man slaughter) be defended on the basis of the clauses related to self defense and provocation. Lets discuss it one by one, in detail.
1. Murder:
It is essential for an act to be called as murder that the person who made the attempt had made it on, first of all, a living person. Secondly, as a result of that attempt, the victim deceased within a year and a day.
In the provisions of law, the critical words 'malice aforethought' are used to describe the mental state of the murderer. The comments of the Royal Commission on Capital Punishment don't involve any particular ill-will or careful preparation beforehand.
There is a difference in murder and manslaughter. It is committed with the complete intention of putting someone to death in an illegal manner. Thus we can say that in such case, mens reas was there, that in this case means, that the person would lose his life as a result of such assault.
Thus the task of prosecution in murder cases is to prove that the victim died only because of what the offender did. This means that the victim would not have died, had the offender not done what he died. It is also a noticeable factor here that suppose person A shots person B. Person B is then taken to hospital and he died. However, if he dies due to doctor's negligence, the offended would not be charged for murder. This means that it is required that the victim must die from the charge of murder only.
Let us take an example of it from past cases. In one of the cases before the Court of Appeal, James Jordon was charged for murder of a person, who was died in hospital after being injured as a result of an attempt by James Jordan. However, when medical reports showed that the death had infact been caused by the treatment with terramycin, an antibiotic drug to which the deceased was intolerant, and by the intravenous introduction of abnormal quantities of liquid, so that death in fact resulted from broncho-pneumonia, rather than the stab wound, the court cancelled the conviction on Jordon for as Hallett J. said:
It is sufficient to point out here that this was not normal treatment. Not only one feature, but two ...Download file to see next pagesRead More
Share:
Tags
Cite this document
(“Criminal Law: case study Example | Topics and Well Written Essays - 2250 words”, n.d.)
Criminal Law: case study Example | Topics and Well Written Essays - 2250 words. Retrieved from https://studentshare.org/miscellaneous/1501688-criminal-law-case-study

The Declaration of Helsinki by the WHO clearly states that in clinical trials involving humans the wellbeing of the subject should be of prime importance than the interest of science or society. This has been stated because at times in order to achieve the objectives of a study the investigators might overlook the welfare of the trial subjects thus jeopardizing their health in the process. According to ethical rules while comparing two treatment options the control group of the study must receive the best-known treatment available while the study subjects are given a potential newer treatment. Only when there is no effective treatment available a placebo-controlled group can be used for the study. There have been several trials th...
7 Pages(1750 words)Essay
sponsored ads
Save Your Time for More Important Things
Let us write or edit the case study on your topic "Criminal Law: case study" with a personal 20% discount.
GRAB THE BEST PAPER

Let us find you another Case Study on topic Criminal Law: case study for FREE!