Comments (0)
Add to wishlistDelete from wishlist
Cite this document
Summary
When structuralism proclaims the arbitrary relationship between the signifier and the signified, which has left the speaker and their utterances all wrapped up in relative conventionalism and in the synchronicity of their diachrony; and ever since Simon de Beauvoir has written that one is not born a woman but rather becomes one, we have been provided with the legitimacy to question and challenge inherited social power structures and practices including linguistic ones (Beauvoir 1949/1992, p.281).
…
Download full paperFile format: .doc, available for editing
HIDE THIS PAPERGRAB THE BEST PAPER97.1% of users find it useful 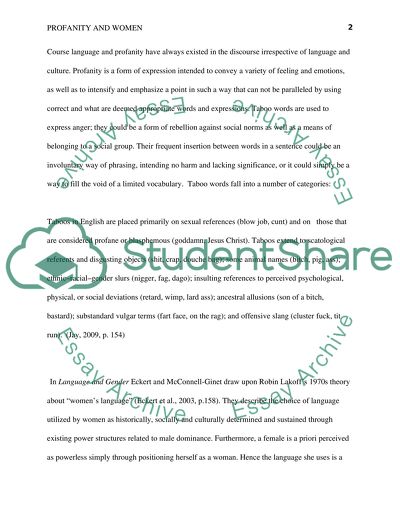 Extract of sample "Profanity and Women"

Download file to see previous pages Profanity as utility is as much part of language and communication as the norm that defines it as a deviation (Jay, 2009, p.155). According to Jay through the use of taboo/swear words "one can achieve myriads of personal and social goals" (Jay, 2009, p.155). Thus combining the socio-physical context and overarching emotiveness of foul language. For it is at a personal level that the dogmatic inappropriateness of taboo words is initially perceived through inflicted punishment and restrictions. Its inadvertent use, however, conveys a necessity to go beyond the formally recognized means of expression. A psychological sociolinguistic reading of taboo language would probably best describe it as an articulated emotional trespassing. Being extreme in essence it is often associated with extreme emotions and states of mind such as anger, frustration, violence, etc. in the expression of which the two genders perform differently depending on their age and social ranking (Eckert & McConnell-Ginet,2003; James, 1998; Jay, 2009 ).
Course language and profanity have always existed in the discourse irrespective of language and culture. Profanity is a form of expression intended to convey a variety of feeling and emotions, as well as to intensify and emphasize a point in such a way that can not be paralleled by using correct and what are deemed appropriate words and expressions. Taboo words are used to express anger; they could be a form of rebellion against social norms as well as a means of belonging to a social group. Their frequent insertion between words in a sentence could be an involuntary way of phrasing, intending no harm and lacking significance, or it could simply be a way to fill the void of a limited vocabulary. Taboo words fall into a number of categories:
Taboos in English are placed primarily on sexual references (blow job, cunt) and on those that are considered profane or blasphemous (goddamn, Jesus Christ). Taboos extend to scatological referents and disgusting objects (shit, crap, douche bag); some animal names (bitch, pig, ass); ethnic-racial-gender slurs (nigger, fag, dago); insulting references to perceived psychological, physical, or social deviations (retard, wimp, lard ass); ancestral allusions (son of a bitch, bastard); substandard vulgar terms (fart face, on the rag); and offensive slang (cluster fuck, tit run). (Jay, 2009, p. 154)
In Language and Gender Eckert and McConnell-Ginet draw upon Robin Lakoff's 1970s theory about "women's language" (Eckert et al., 2003, p.158). They describe the choice of language utilized by women as historically, socially and culturally determined and sustained through existing power structures related to male dominance. Furthermore, a female is a priori perceived as powerless simply through positioning herself as a woman. Hence the language she uses is a "powerless language" and it prevents her from interactional effectiveness (Eckert et al., 2003, p.159). A type of language, which has been also attributed to other marginalized and discriminated against categories such as homosexuals and people of various racial and ethnic backgrounds.
From an early age, people and especially women, are conditioned to perceive certain words as profane, ...Download file to see next pagesRead More
Share:
Tags
Cite this document
(“Profanity and Women Essay Example | Topics and Well Written Essays - 1500 words”, n.d.)
Profanity and Women Essay Example | Topics and Well Written Essays - 1500 words. Retrieved from https://studentshare.org/miscellaneous/1501446-profanity-and-women

CHECK THESE SAMPLES OF Profanity and Women

...? The Function of Profanity in Allen Ginsberg’s Howl Allen Ginsberg’s poem Howl uses some profanity, but not that much. The “f-word” (if being counted correctly) is only used twice. However, having a unique view on profanity—it’s very possible that: some of the language he uses is adult, not merely profane; Ginsberg is trying to make an aesthetically arresting poem; and some of the references he uses are to make the reader emote. The language in Allen Ginsberg’s Howl can, at times, be strong. However, there is not so much profanity as there exists manifold references of fornication, illicit usage of controlled substances, and music—otherwise known as “sex, drugs, and rock ‘n’ roll,” to name the coined turn of phrase so often used in order...
2 Pages(500 words)Essay

In the story, one symbolism used to represent the sensitivity and weakness of women is the chrysanthemums themselves. The chrysanthemums are described as having stems that are too small and easy for Elisa’s energy, and this is basically the same as her character. As a weak and sensitive woman, she easily becomes prey to the kindness displayed by the stranger. Just like the chrysanthemums that need to be constantly transplanted and regularly cut, women like Elisa easily believe what men tell them although this is not necessarily true. Moreover, the chrysanthemums are somehow ridiculed by Harvey when he tells Elisa, “Some of those yellow chrysanthemums you had this year were ten inches across…I wish you’d wo...
7 Pages(1750 words)Literature review
sponsored ads
Save Your Time for More Important Things
Let us write or edit the essay on your topic "Profanity and Women" with a personal 20% discount.
GRAB THE BEST PAPER

Let us find you another Essay on topic Profanity and Women for FREE!