Comments (0)
Add to wishlistDelete from wishlist
Cite this document
Summary
When we go at a shop to buy something, we expect to get that product at a value we perceive to be associated with it. Also when we travel abroad, we expect the same product to cost us the same value that we get in the home country. Investopedia defines this phenomenon as the Purchasing Power Parity which in economic terms is a "theory that estimates the amount of adjustment needed on the exchange rate between countries in order for the exchange to be equivalent to each currency's purchasing power."
…
Download full paperFile format: .doc, available for editing
HIDE THIS PAPERGRAB THE BEST PAPER96.6% of users find it useful 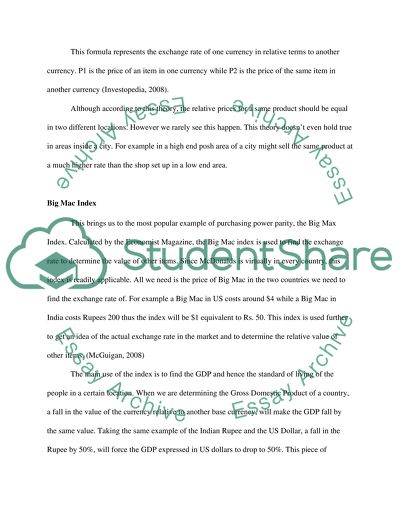 Download file to see previous pages On the other hand, a US Dollar has more purchasing power than a Pakistani or Indian Rupee. These differences are usually because of availability and demand for the goods amongst other factors. By taking an international measure and determining the cost for that measure in each of the two currencies and comparing them we can solve this problem. (McGuigan, 2008)
This formula represents the exchange rate of one currency in relative terms to another currency. P1 is the price of an item in one currency while P2 is the price of the same item in another currency (Investopedia, 2008).
Although according to this theory, the relative prices for a same product should be equal in two different locations. However we rarely see this happen. This theory doesn't even hold true in areas inside a city. For example in a high end posh area of a city might sell the same product at a much higher rate than the shop set up in a low end area.
This brings us to the most popular example of purchasing power parity, the Big Max Index. Calculated by the Economist Magazine, the Big Mac index is used to find the exchange rate to determine the value of other items. Since McDonalds is virtually in every country, this index is readily applicable. All we need is the price of Big Mac in the two countries we need to find the exchange rate of. For example a Big Mac in US costs around $4 while a Big Mac in India costs Rupees 200 thus the index will be $1 equivalent to Rs. 50. This index is used further to get an idea of the actual exchange rate in the market and to determine the relative value of other items. (McGuigan, 2008)
The main use of the index is to find the GDP and hence the standard of living of the people in a certain location. When we are determining the Gross Domestic Product of a country, a fall in the value of the currency relative to another base currency, will make the GDP fall by the same value. Taking the same example of the Indian Rupee and the US Dollar, a fall in the Rupee by 50%, will force the GDP expressed in US dollars to drop to 50%. This piece of information does not reflect true picture of the situation since the devaluation of the Indian currency maybe due to the international trade issues. However when we look at each day's exchange rates of the Dollar to the Rupee, we see fluctuations coming each day. But when we use the Big Mac index, these fluctuations are not reflected into the price of Big Mac each day. The price of the Big Mac remains to be Rs. 200 for quite a while even though the value of Dollar is increasing.
Purchasing Power Parity - Analysis
When we talk about the long-run, the purchasing power parity theory tells us that differences in the prices of the items in different countries are not sustainable as forces acting in the market place will equalize prices between countries and change exchange rates in doing so. Consider an example of a person who finds that the price of tomatoes is $5 lesser in another state. Traveling to the other state will cost the person $50 in fuel, thus just to save $5, this trip will incur a loss to the person. But when you consider bulk purchase this scenario comes out to be completely ...Download file to see next pagesRead More
Share:
Tags
Cite this document
(“Purchasing Power Parity and the Big Mac Index Essay”, n.d.)
Retrieved from https://studentshare.org/miscellaneous/1501371-purchasing-power-parity-and-the-big-mac-index

Power and Politics in Business

Perhaps the best example of personalized power comes from the CEO of Apple computers i.e. Steve Jobs. Even a cursory glance at the power structure of the company will show that the management techniques used at Apple have greatly affected the company’s success and failure. A culture of power and an aura of personal authority extend from the CEO of the company and as the CEO will often behave in a radical, unconventional and anti-organizational way, so does the company follow in his mighty footsteps.

For example, Steve Jobs’ management process of terminating employees is absolute and unquestioned since he is famous for his summary ‘executions’ where he has been known to fire people working for the...
6 Pages(1500 words)Essay

A monopolist will not produce where the demand for a product is elastic—that is when the sensitivity of the quantity of the product demanded is high in relation to its price. The main characteristic of a monopoly is that it has the power to influence price being the sole producer in an industry; therefore the higher the level to where it raises its price, the more drastic wi...
9 Pages(2250 words)Assignment

...Econometrics 211 Assignment – Topic Purchasing Power Parity Introduction The purpose of this assignment is to test the theory underlying relative purchasing power parity (hereafter referred to as PPP). A regression model will be used to test the strength and direction of the relationships between foreign and domestic inflation rates with the change in the growth rate of the exchange rate between two countries – the US as the domestic country and Sri Lanka as the foreign country. The paper proceeds by giving a brief overview of some of the literature relevant to PPP. Thereafter the data and methodology used in the paper are discussed, before moving on to an examination of the regression output. A variety of diagnostics tests are then done...
7 Pages(1750 words)Assignment

... temperatures which are used to drive steam turbines to generate electricity. At this moment, these technologies are being developed in countries that believe in the economics of these types of projects. The Spanish are looking beyond their own borders and are involved in the construction of large solar power plants in Morocco and Algeria [13]. Nevertheless, power plants that concentrate sunshine are not new. In the Mojave Desert in the US, there are two big solar power plants where parabolic mirrors are used to produce steam and generate electricity. The plant in the desert was built more than 20 years and experience has shown that this is an extremely efficient concept. This plant is evidence that solar energy is reliable, dependable...
17 Pages(4250 words)Case Study

In numerous industrial sectors, the trend has been moving away from adversarial or arms-length supplier relationships to relational or obligational contracting forms of relationship, such as outsourcing. Boeing is one company that has embraced this trend as evidenced by the production of its 787 Dreamliner aircraft. As a way of reducing their aircraft timeline to 4 years from 6 years, Boeing began to outsource parts and to sub-contract other companies internationally. However, as stated by Brandes et al (1997), outsourcing tends to have the most success if it is based on strategic decisions including cost efficiency and core competency considerations, instead of being solely prompted by financial troubles.
Whereas Boein...
6 Pages(1500 words)Assignment
sponsored ads
Save Your Time for More Important Things
Let us write or edit the essay on your topic "Purchasing Power Parity and the Big Mac Index" with a personal 20% discount.
GRAB THE BEST PAPER

Let us find you another Essay on topic Purchasing Power Parity and the Big Mac Index for FREE!