Comments (0)
Add to wishlistDelete from wishlist
Cite this document
Summary
Per the Bible, the last (tenth) antediluvian Patriarch was Noah. Noah's story can be seen in chapters five to nine of the book of Genesis. This Bible flood hero saved his family and all kinds of animals in pairs or in groups of seven from God's punishment to mankind…
Download full paperFile format: .doc, available for editing
HIDE THIS PAPERGRAB THE BEST PAPER91.1% of users find it useful 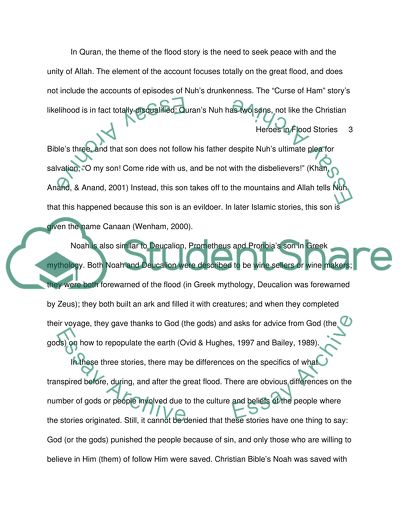 Extract of sample "Comparison of Heroes in Flood Stories"

Heroes in Flood Stories Heroes in flood Stories: A Comparison In APA Style In partial fulfilment of the requirements for (subject)
(Instructor)
(Date)
Heroes in Flood Stories 2
Per the Bible, the last (tenth) antediluvian Patriarch was Noah. Noah's story can be seen in chapters five to nine of the book of Genesis. This Bible flood hero saved his family and all kinds of animals in pairs or in groups of seven from God's punishment to mankind. He was granted a covenant from God, and his descendants repopulate the earth (Bailey, 1989). While Noah's Ark and the flood story in the Bible are the most widely known elements of Noah's story, he was also described as the inventor of wine and "first husbandman" (Bailey, 1989). He was also mentioned in stories depicting episodes of his drunkenness and the ensuing "Curse of Ham." (Wenham, 2000) Noah's story was greatly influential in the West and was the focus of much elaboration in the following Abraham-ic traditions. In Islam, Noah (Nuh) is believed to be a prophet of Allah (God) (Khan, Anand, & Anand, 2001) and Christians likened the Christian Church to the Ark of Noah (Wenham, 2000). Noah in the book of Genesis lives for a total of 950 years, with the great flood happening in his 600th year. In Quran, Nuh (Noah) is already 950 when the great flood happened and was told to have spent his lifetime preaching the belief that there is only of God (singleness of Allah) (Wenham, 2000). In later stories, only 83 people are willing to become Muslims (submit themselves to Allah) and only these 83 people were saved with Nuh. Mankind's stubbornness ultimately brings God's wrath on the non-believers (Wenham, 2000).
In Quran, the theme of the flood story is the need to seek peace with and the unity of Allah. The element of the account focuses totally on the great flood, and does not include the accounts of episodes of Nuh's drunkenness. The "Curse of Ham" story's likelihood is in fact totally disqualified: Quran's Nuh has two sons, not like the Christian
Heroes in Flood Stories 3
Bible's three, and that son does not follow his father despite Nuh's ultimate plea for salvation, "O my son! Come ride with us, and be not with the disbelievers!" (Khan, Anand, & Anand, 2001) Instead, this son takes off to the mountains and Allah tells Nuh that this happened because this son is an evildoer. In later Islamic stories, this son is given the name Canaan (Wenham, 2000).
Noah is also similar to Deucalion, Prometheus and Pronoia's son in Greek mythology. Both Noah and Deucalion were described to be wine sellers or wine makers; they were both forewarned of the flood (in Greek mythology, Deucalion was forewarned by Zeus); they both built an ark and filled it with creatures; and when they completed their voyage, they gave thanks to God (the gods) and asks for advice from God (the gods) on how to repopulate the earth (Ovid & Hughes, 1997 and Bailey, 1989).
In these three stories, there may be differences on the specifics of what transpired before, during, and after the great flood. There are obvious differences on the number of gods or people involved due to the culture and beliefs of the people where the stories originated. Still, it cannot be denied that these stories have one thing to say: God (or the gods) punished the people because of sin, and only those who are willing to believe in Him (them) of follow Him were saved. Christian Bible's Noah was saved with his family along with other creatures who were in the Ark with him. Nuh's son Ham (named Canaan in later stories) is the Promised Land before the Jews conquered it. It may be metaphoric in nature depending on the person interpreting the meaning. This son was not saved due to disbelief. Deucalion and his wife were the only ones saved in Ovid's Metamorphoses (Ovid & Hughes, 1997).
References
Bailey, L. R. (1989). Noah: the person and the story in history and tradition. Studies on personalities of the Old Testament. Columbia, S.C.: University of South Carolina Press.
Khan, S., Anand, A., & Anand, A. K. (2001). The story of the Prophet Nuh. First thing first series. New Delhi: Goodword Books.
Ovid, & Hughes, T. (1997). Tales from Ovid. New York: Farrar, Straus and Giroux.
Wenham, G. J. (2000). Davis A. Young: The Biblical Flood: A Case Study of the Church's Response to Extrabiblical Evidence. EUROPEAN JOURNAL OF THEOLOGY. 9, 204. Read More
Share:
Tags
Cite this document
(“Comparison of Heroes in Flood Stories Essay Example | Topics and Well Written Essays - 500 words”, n.d.)
Comparison of Heroes in Flood Stories Essay Example | Topics and Well Written Essays - 500 words. Retrieved from https://studentshare.org/miscellaneous/1501347-comparison-of-heroes-in-flood-stories

CHECK THESE SAMPLES OF Comparison of Heroes in Flood Stories

Austria or you may call is the Republic of Austria in official terminology is located in Central Europe. Although the population figures do not touch the danger limit but the talent and resources are worthwhile there. Germany and Hungry are also near this region. Italy is in the south of Austria. Switzerland will be seen in the west. So, now you can realize the importance of this region clearly.
The GDP is also impressive here. You can say the economy is strong and it has much depth. The strong social market economy is the result of development and proper management by the government (DArt & Turner 2008). Traders find flexibility in business operations. Labor has a positive approach to work and jobs.
There was a tren...
9 Pages(2250 words)Term Paper
sponsored ads
Save Your Time for More Important Things
Let us write or edit the essay on your topic "Comparison of Heroes in Flood Stories" with a personal 20% discount.
GRAB THE BEST PAPER

Let us find you another Essay on topic Comparison of Heroes in Flood Stories for FREE!