Comments (0)
Add to wishlistDelete from wishlist
Cite this document
Summary
A background check on the biography of Elizabeth Cady Stanton, Susan Anthony and Amelia Bloomer reveals that they are three of the most prominent women's advocate especially with regards to the subject of woman's suffrage. One could not help but agree upon reading the articles that were given for analysis that they are indeed staunch political activists in asking for the right to vote…
Download full paperFile format: .doc, available for editing
HIDE THIS PAPERGRAB THE BEST PAPER98.6% of users find it useful 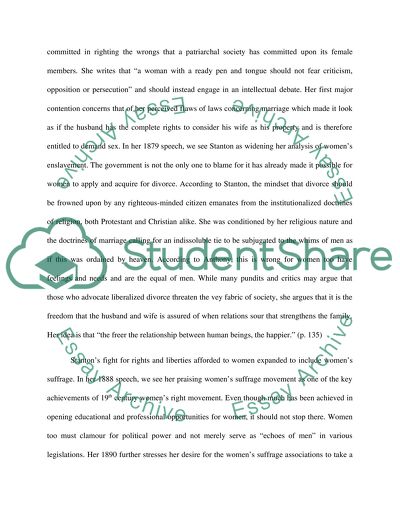 Download file to see previous pages This is shown in her 1869 speech regarding the McFarland-Richardson case in which Daniel McFarland was declared not guilty of shooting Albert Richardson. The latter is the new found love of Abby McFarland, Daniel's former wife. Daniel was even awarded custody of their 12 year old child. Anthony's indignation in the treatment of women as mere wives and child raisers subject to the notion of a property of the husband can be seen in this speech and the McFarland-Richardson affair culminates in a lifelong battle to change not only the divorce and marriage laws of New York but also to endow women with the right to vote. Her conviction can be deduced to be the result of this particular injustice committed against her kind.
She was nothing of the sort of an ignorant woman clamouring for the appealing ideas of equality as her way of writing reveals. Instead, she was very intelligent and is indeed very committed in righting the wrongs that a patriarchal society has committed upon its female members. She writes that "a woman with a ready pen and tongue should not fear criticism, opposition or persecution" and should instead engage in an intellectual debate. Her first major contention concerns that of her perceived flaws of laws concerning marriage which made it look as if the husband has the complete rights to consider his wife as his property and is therefore entitled to demand sex. In her 1879 speech, we see Stanton as widening her analysis of women's enslavement. The government is not the only one to blame for it has already made it possible for women to apply and acquire for divorce. According to Stanton, the mindset that divorce should be frowned upon by any righteous-minded citizen emanates from the institutionalized doctrines of religion, both Protestant and Christian alike. She was conditioned by her religious nature and the doctrines of marriage calling for an indissoluble tie to be subjugated to the whims of men as if this was ordained by heaven. According to Anthony, this is wrong for women too have feelings and needs and are the equal of men. While many pundits and critics may argue that those who advocate liberalized divorce threaten the vey fabric of society, she argues that it is the freedom that the husband and wife is assured of when relations sour that strengthens the family. Her idea is that "the freer the relationship between human beings, the happier." (p. 135)
Stanton's fight for rights and liberties afforded to women expanded to include women's suffrage. In her 1888 speech, we see her praising women's suffrage movement as one of the key achievements of 19th century women's right movement. Even though much has been achieved in opening educational and professional opportunities for women, it should not stop there. Women too must clamour for political power and not merely serve as "echoes of men" in various legislations. Her 1890 further stresses her desire for the women's suffrage associations to take a more proactive role in the politics of the nation and not only in fighting and securing the right to vote. It was a fight most of her contemporaries were unprepared to take and became a rallying point of argument against her person. In spite of the isolation that she experienced from her contemporaries ...Download file to see next pagesRead More
Share:
Tags
Cite this document
(“Women Suffragists Book Report/Review Example | Topics and Well Written Essays - 1000 words”, n.d.)
Women Suffragists Book Report/Review Example | Topics and Well Written Essays - 1000 words. Retrieved from https://studentshare.org/miscellaneous/1500993-women-suffragists

CHECK THESE SAMPLES OF Women Suffragists

In the story, one symbolism used to represent the sensitivity and weakness of women is the chrysanthemums themselves. The chrysanthemums are described as having stems that are too small and easy for Elisa’s energy, and this is basically the same as her character. As a weak and sensitive woman, she easily becomes prey to the kindness displayed by the stranger. Just like the chrysanthemums that need to be constantly transplanted and regularly cut, women like Elisa easily believe what men tell them although this is not necessarily true. Moreover, the chrysanthemums are somehow ridiculed by Harvey when he tells Elisa, “Some of those yellow chrysanthemums you had this year were ten inches across…I wish you’d wo...
7 Pages(1750 words)Literature review
sponsored ads
Save Your Time for More Important Things
Let us write or edit the book report/review on your topic "Women Suffragists" with a personal 20% discount.
GRAB THE BEST PAPER

Let us find you another Book Report/Review on topic Women Suffragists for FREE!