Comments (0)
Add to wishlistDelete from wishlist
Cite this document
Summary
This Paper discusses the research and interview findings from an Indian person about his country. The paper focuses on India's location, its culture and other economic and social features. It then marks out any differences between the research conducted and the personal experience.
…
Download full paperFile format: .doc, available for editing
HIDE THIS PAPERGRAB THE BEST PAPER92.8% of users find it useful 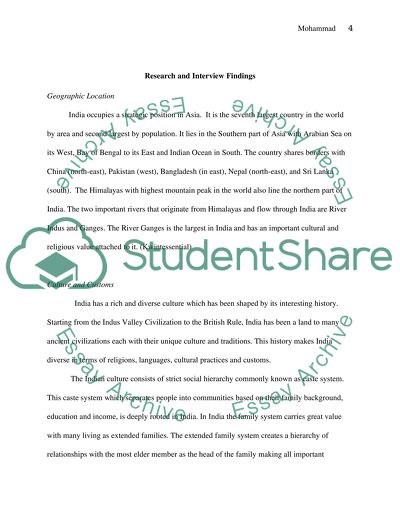 Download file to see previous pages The cultural differences can cause serious misunderstanding and hamper the way towards building healthy professional and business relationships. Thus it is highly important that before initiating any cross cultural relationship that the differences are understood and respected.
The purpose of this paper is to gain awareness and skills in dealing with global diversity. The objective was achieved by doing research about an international country and interviewing a person from that place. A lot of information was gained about the country's location, its people, culture, economy and lifestyle. The country chosen in this case is India.
India occupies a strategic position in Asia. It is the seventh largest country in the world by area and second largest by population. It lies in the Southern part of Asia with Arabian Sea on its West, Bay of Bengal to its East and Indian Ocean in South. The country shares borders with China (north-east), Pakistan (west), Bangladesh (in east), Nepal (north-east), and Sri Lanka (south). The Himalayas with highest mountain peak in the world also line the northern part of India. The two important rivers that originate from Himalayas and flow through India are River Indus and Ganges. The River Ganges is the largest in India and has an important cultural and religious value attached to it. (Kwintessential)
India has
Culture and Customs
India has a rich and diverse culture which has been shaped by its interesting history. Starting from the Indus Valley Civilization to the British Rule, India has been a land to many ancient civilizations each with their unique culture and traditions. This history makes India diverse in terms of religions, languages, cultural practices and customs.
The Indian culture consists of strict social hierarchy commonly known as caste system. This caste system which separates people into communities based on their family background, education and income, is deeply rooted in India. In India the family system carries great value with many living as extended families. The extended family system creates a hierarchy of relationships with the most elder member as the head of the family making all important decisions and requires deep respect of elders. That is why the when the young greets an elder person of the society, they touch their feet as a symbol of respect and blessing. (Kwintessential) Also when meeting each other, Indians greet by saying "Namaste" accompanied by slightly bowed gesture with hands pressed together vertically in front of chest. Moreover Arranged marriages are preferred in India with the parents and other family members planning the marriage. Mostly the marriages are planned among the same communities. Indians have great concern for their families and relatives and tend to adjust their plans and goals that would satisfy the people around them. They have strong family values and engage in long term relationships with true commitment.
Weddings are a grand affair in India lasting for weeks and even months for some families. Birth and death ceremonies are also held with great fervor consisting of various rituals that last for many days. ...Download file to see next pagesRead More
Share:
Tags
Cite this document
(“India Essay Example | Topics and Well Written Essays - 2250 words”, n.d.)
India Essay Example | Topics and Well Written Essays - 2250 words. Retrieved from https://studentshare.org/miscellaneous/1500906-india

CHECK THESE SAMPLES OF India

Harley-Davidson has attained record global revenue growth for 19 consecutive years, the latest at 17.40% (Harley-Davidson, Inc. 2007). Furthermore, it owns a 16% market share in Japan, 10% in Europe and 38% in Australia.

Harley-Davidson has, so far, been successful with its Marketing Mix. Positioning its brand as part of the American culture, it has firmly established a cult following due to images of heritage, tradition, and mystique. It was able to sell its units solely relying on the image that the brand has managed to build up after decades of influencing the choices of the American motorcycle enthusiast. It lives up to the kind of passion it embodies and continues to attract people with similar perceptions and desi...
7 Pages(1750 words)Case Study

...ozone layer, the need for an efficient and cost effective human resources etc are driving the industry to adopt appropriate measures for sustaining their competitive market positioning. These trends and forces are playing significant role in changing and reshaping the industry. b. Utilize a macroeconomic forecast of economic indicators that will affect your chosen organization in the future and should be considered part of strategic planning. The main macroeconomic variable that toys in the global economy’s shift is the emergence of India and China as new super powers. This emergence certainly has a number of implications, but among the most relevant are: disruption of the equilibrium of the global economy which results in a rising...
10 Pages(2500 words)Assignment

Business of Dell in India

..., the telecom sector was removed from government monopoly and was consequently liberalized. The liberalization improved scope for private investment. Along with private investments, the quality of service also improved as accountability is always a major concern for private ownerships. As the telecom networks and services improved in India, it opened the floodgates for the growth of the information technology enabled services in India. Along with this, the launch of new telecom policy by government of India in 1999 which introduced internet protocol telephony, led to rapid growth of the information technology and information technology enabled services, popularly known as IT/ITES. As...
7 Pages(1750 words)Assignment

The Republic of India found South of Asia is by far the world’s most populous democracy and ranks seventh largest in terms of geographical area (Brown, 1994). India is also the second most highly populated country in the world. The country has a rich culture with four major religions having originally emerged from it; Sikhism, Buddhism, Hinduism, and Jainism. The Indian Republic consists of seven union territories and 28 states and ranks twelfth la...
8 Pages(2000 words)Case Study
sponsored ads
Save Your Time for More Important Things
Let us write or edit the essay on your topic "India" with a personal 20% discount.
GRAB THE BEST PAPER

Let us find you another Essay on topic India for FREE!