Comments (0)
Add to wishlistDelete from wishlist
Cite this document
Summary
The main distinctive feature about the Spanish transition is the change of dictatorship to democracy. The Spanish transition to democracy or new Bourbon restoration was the era when Spain had to move from the dictatorship of Francisco Franco to a liberal democratic state…
Download full paperFile format: .doc, available for editing
HIDE THIS PAPERGRAB THE BEST PAPER92.9% of users find it useful 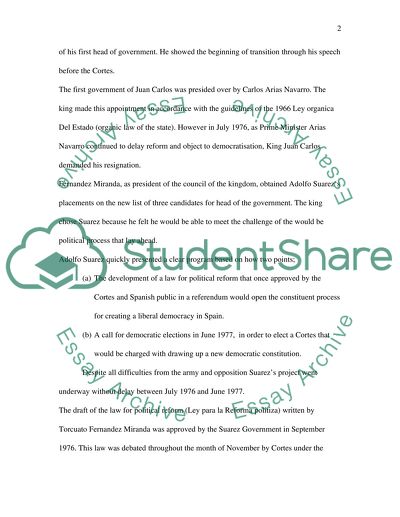 Download file to see previous pages The death of Franco elevated Dan Juan Carlos de Bourbon to the monarchy. Until Franco's death, Juan Carlos had discreetly stood in the background and served to follow the dictator's plan. However once in power as king of Spain Juan Carlos facilitated the development of the current political system, as his father, Don Juan de Bourbon had advocated since 1946.
Juan Carlos began his reign without leaving the confines of Franco's legal system. As such he swore fidelity to the principles of the movement national, the sole legal party of the Franco era. He took possession of the crown before the Francoist Cortes Generales and respected Ley Organica del Estado (the organic law of the state) for the appointment of his first head of government. He showed the beginning of transition through his speech before the Cortes.
The first government of Juan Carlos was presided over by Carlos Arias Navarro. The king made this appointment in accordance with the guidelines of the 1966 Ley organica Del Estado (organic law of the state). However in July 1976, as Prime Minister Arias Navarro continued to delay reform and object to democratisation, King Juan Carlos demanded his resignation.
Fernandez Miranda, as president of the council of the kingdom, obtained Adolfo Suarez's placements on the new list of three candidates for head of the government. The king chose Suarez because he felt he would be able to meet the challenge of the would be political process that lay ahead.
Adolfo Suarez quickly presented a clear program based on how two points;
(a) The development of a law for political reform that once approved by the Cortes and Spanish public in a referendum would open the constituent process for creating a liberal democracy in Spain.
(b) A call for democratic elections in June 1977, in order to elect a Cortes that would be charged with drawing up a new democratic constitution.
Despite all difficulties from the army and opposition Suarez's project went underway without delay between July 1976 and June 1977.
The draft of the law for political reform (Ley para la Reforma politiza) written by Torcuato Fernandez Miranda was approved by the Suarez Government in September 1976. This law was debated throughout the month of November by Cortes under the presidency of Fernandez-Miranda. It was approved with 425 votes in favour, 598 against and 13 abstentions. The Suarez government wanted to gain further legitimacy for the changes through a popular referendum with 77.72 % participation rate. 94% of the voters voted in favour of the changes to add to his credibility Suarez, freed 400 prisoners in July 1976. He also granted blanket amnesty in May same year. In December 1976, he disbanded the Tribunal de Order Publica (TOP), a sort of Francoist secret police. He legalized the right to strike, with the right to unionize being granted a month after Suarez initiated political contact with the opposition by meeting Felipe Gonzalez, secretary general of the PSOE in 1976. However the big problem was for political normalization was the legalization of the communist party of Spain (Partido communista de Espania). PCE's secretary general, Santiago Carrillo's offer of a "social pact" pushed Suarez to take the riskiest step of transition by legalizing PCE in April 1977.
To resolve the difficulty of a group of hard -liner Francoist led by Jose Antonio Giron, Suarez centered on General Diez Alegria. He decided to give the members this group the ...Download file to see next pagesRead More
Share:
Tags
Cite this document
(“Comparative democratisation Essay Example | Topics and Well Written Essays - 2000 words”, n.d.)
Comparative democratisation Essay Example | Topics and Well Written Essays - 2000 words. Retrieved from https://studentshare.org/miscellaneous/1500677-comparative-democratisation

CHECK THESE SAMPLES OF Comparative democratisation

...?Democratisation Localisation of Democracy A democracy is a government in which citizens in a country participate in making decisions that affect their lives. Primarily, this involves making decisions that affect legal aspects of people’s lives including drafting, debating and enactment of legislation to become law. In addition, democracy involves people participation in making social, economic and cultural decisions. In democracies, representatives or leaders put in record people’s contributions towards making of laws of the land, by-laws and other relevant social instruments depending on the extent of democracy. The constitution is the supreme law of the land in most modern democracies, and all other laws, including customary laws must...
10 Pages(2500 words)Essay

The social policy varies differently by the needs of individual nations and can include assistance to youth unemployment in an attempt to provide temporary aid until an individual is able to sustain a regular income through work incentives. One of the main theories regarding welfare to work programs is that working parents contribute to the economy and are less likely to rely solely on the state for their welfare (Walling, 2005). With this concept being one of the primary motivators for welfare to work policies, different nations adopt a policy to provide an allotment of skills training, aid with transportation issues, financial support, and even child care as an incentive to drive the welfare recipient back into full-time work. T...
9 Pages(2250 words)Report

For their case study, Somers and Block chose to use for their examination was the social and political motivation behind the New Poor Law of 1834 in England and Wales, compared with the United States social security legislation passed during 1996. The main objective of the article by Somers and Block is to argue that these two pieces of legislation were intended to decrease the level of welfare provision in their respective countries. Such a reduction was they argued due to the growing influence of free-market ideology, which regarded all such provision as morally wrong, as well as encouraging people not to work.

For the people that introduced the New Poor Law and the American social security legislation, there was a st...

...Trade liberalization and comparative advantage: Before industrial revolution in Great Britain different countries were conducted by the mercantilist viewpoint. It was believed that the countries should promote the merchants to sell more domestic good over the world and accumulate precious metals from foreign countries. It was Adam Smith who first theorized a mutually beneficial nature of trade through his theory of ‘Absolute Advantage’. (Wykstra, 1971, 641-643) Later on David Ricardo modified the concept of the conditions in which trade can be mutually beneficial by his famous theory “Comparative Cost Advantage”. Ricardian theory of comparative cost advantage is explained in two countries, two commodity and single factor framework...
6 Pages(1500 words)Assignment

...COMPARATIVE ANALYSIS FOR ENVIRONMENTAL/EARTH ISSUE IN SALT LAKE INTRODUCTION It has in the recent past been observed that the human population is on the increase and is predicted to continue rising in the next few years. Due to this rapid and sudden increase in human population, globalization has also been fully embraced by a majority of nations around the world, including third world nations (Bailey, Chase, Cassano & Noone 2001). One would expect that since man has come to embrace technological advances which are some of the benefits brought about by globalization and industrialization, he would be wise enough to protect and take care of his surroundings. It is rather unfortunate that the more advanced man becomes, the more careless he...
9 Pages(2250 words)Term Paper

Comparative Banking in the USA

The central bank requires banks to maintain a certain amount of reserve. This means that commercial banks should not lend out all of its deposits but rather should maintain some minimum balance to be used to meet immediate depositors withdraws. Further, the central bank supervises banks to ensure that they disclose accurate and relevant financial information that may be used by investors and other users to determine the financial worthiness of a given bank. In addition, the central bank act as a lender of last resort to the /commercial banks and therefore, disclosure of financial information may help the central bank to determine the amount of loan that can be advanced to a certain bank (James, Jie and Daniel,p.13). Further, the g...
7 Pages(1750 words)Assignment
sponsored ads
Save Your Time for More Important Things
Let us write or edit the essay on your topic "Comparative democratisation" with a personal 20% discount.
GRAB THE BEST PAPER

Let us find you another Essay on topic Comparative democratisation for FREE!