Comments (0)
Add to wishlistDelete from wishlist
Cite this document
Summary
In the world today, a total of 33.2 million now live with HIV/AIDS. Last year alone, 2.1 million people have died as a result of this disease. While there have been many initiatives made to cure this dreaded disease and alleviate the plight of those afflicted by it, it still is a sad reality that these initiatives as well as the advances in medical technology have not been able to reach those who need it the most - individuals from developing countries where there are inadequate facilities and a less then satisfactory health care system.
…
Download full paperFile format: .doc, available for editing
HIDE THIS PAPERGRAB THE BEST PAPER92.1% of users find it useful 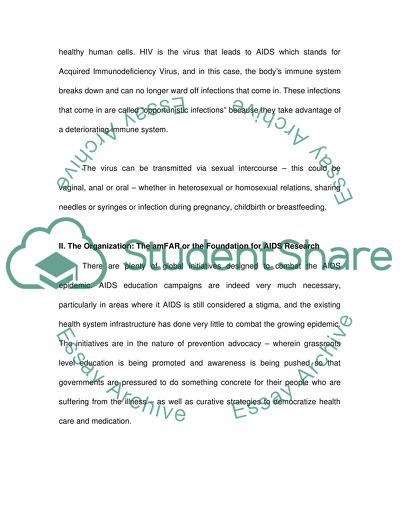 Download file to see previous pages In Asia, on the other hand, another continent where the world's poor may be found, 432,000 people became newly infected, raising the total number of infected people to 4.8 million. While there have been some increase in the number of HIV/AIDS victims in the more prosperous parts of the world like Europe and the United States, the increase in the developing countries are sharper and therefore more alarming.
HIV stands for human immunodeficiency virus. It is a virus that infects human cells and the virus grows and reproduces by feeding of the nutrients of healthy human cells. HIV is the virus that leads to AIDS which stands for Acquired Immunodeficiency Virus, and in this case, the body's immune system breaks down and can no longer ward off infections that come in. These infections that come in are called "opportunistic infections" because they take advantage of a deteriorating immune system.
The virus can be transmitted via sexual intercourse - this could be vaginal, anal or oral - whether in heterosexual or homosexual relations, sharing needles or syringes or infection during pregnancy, childbirth or breastfeeding.
There are plenty of global initiative...
The initiatives are in the nature of prevention advocacy - wherein grassroots level education is being promoted and awareness is being pushed so that governments are pressured to do something concrete for their people who are suffering from the illness - as well as curative strategies to democratize health care and medication.
One such initiative is the amFAR or the Foundation for AIDS Research. In its website (www.amfar.org), the organization described itself as follows:
Founded in 1985, amfAR is dedicated to ending the global AIDS epidemic through innovative research. With the freedom and flexibility to respond quickly to emerging areas of scientific promise, amfAR plays a catalytic role in accelerating the pace of HIV/AIDS research and achieving real breakthroughs. amfAR-funded research has increased our understanding of HIV and has helped lay the groundwork for major advances in the study and treatment of HIV/AIDS. Since 1985, amfAR has invested $260 million in its mission and has awarded grants to more than 2,000 research teams worldwide.

“Exploring How Constructions of Power Operate in and Among Communities Essay”, n.d. https://studentshare.org/miscellaneous/1500617-exploring-how-constructions-of-power-operate-in-and-among-communities-and-institutions.
Comments (0)
Click to create a comment or rate a document

Nutrition is pivotal for growth and progression of normal life and also a disease-free life. It is imperative for everybody and much more important in the case of children and infants because they are in their maximum growth stage. Malnutrition at this stage can have serious repercussions for the...
10 Pages(2500 words)Coursework
sponsored ads
Save Your Time for More Important Things
Let us write or edit the essay on your topic "Exploring How Constructions of Power Operate in and Among Communities and Institutions" with a personal 20% discount.
GRAB THE BEST PAPER

Let us find you another Essay on topic Exploring How Constructions of Power Operate in and Among Communities and Institutions for FREE!