Comments (0)
Add to wishlistDelete from wishlist
Cite this document
Summary
Sam's Club is a membership retail club that allows members to buy from a complete line of jewelry, collectibles, electronics, apparel, flowers, organic foods, groceries, meats, and more. Since its first store opened in 1983, Sam's Club has grown to serve more than 47 million members in the United States with its more than 580 locations across the country (Sam's Club, 2007)…
Download full paperFile format: .doc, available for editing
HIDE THIS PAPERGRAB THE BEST PAPER94.7% of users find it useful 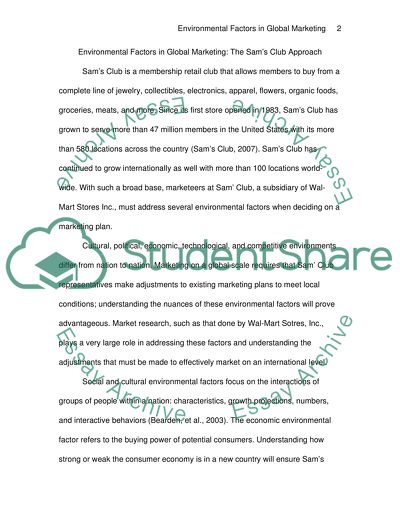 Download file to see previous pages Cultural, political, economic, technological, and competitive environments differ from nation to nation. Marketing on a global scale requires that Sam' Club representatives make adjustments to existing marketing plans to meet local conditions; understanding the nuances of these environmental factors will prove advantageous. Market research, such as that done by Wal-Mart Sotres, Inc., plays a very large role in addressing these factors and understanding the adjustments that must be made to effectively market on an international level.
Social and cultural environmental factors focus on the interactions of groups of people within a nation: characteristics, growth projections, numbers, and interactive behaviors (Bearden, et al., 2003). The economic environmental factor refers to the buying power of potential consumers. Understanding how strong or weak the consumer economy is in a new country will ensure Sam's Club's ability to meet and exceed the customers' expectations and needs. Marketing practices and several ethical concerns can be discovered by researching a nations political system. For example, labor laws vary from one nation to another; advertising laws may be different and various regulations in different nations can affect marketing practices and, occasionally, marketing effectiveness (Bearden et al., 2003). Technological environmental factors involve trends in innovations; these factors can determine how marketing plans are performed or carried out. Finally, the competitive environmental factors entail understanding how many organizations currently compete to serve the consumers with similar product lines and services offered by Sam's Club (Bearden, et al., 2003).
Cultural differences from nation to nation will sometimes effect the types of products to be offered. Armstrong and Kotler (2005) use McDonald's as an example of using product diversity to market to different nations:
McDonald's uses the same basic operating formula in its restaurants around the world but adapts its menu to local tastes. It uses chili sauce instead of ketchup on its hamburgers in Mexico. In Vienna, its restaurants include "McCafes," which offer coffee blended to local tastes, and in Korea, it sells roast pork on a bun with a garlicky soy sauce. In India, where cows are considered sacred, McDonald's serves chicken, fish, vegetable burgers, and the Maharaja Mac- two all-mutton patties, special sauce, lettuce, cheese, pickles, onions on a sesame-seed bun (p. 534).
Armstrong and Kotler (2005) have effectively demonstrated how McDonald's was able to address and overcome cultural environmental factors by offering something other than hamburgers to countries and societies that do not eat them. To successfully enter new cultural markets, Sam's Club, along with Wal-Mart Stores Inc., will need to research differences in brand and product expectations, as well as the delivery of these products.
Growing technology allows Sam's Club and marketing research teams in Wal-Mart Stores, Inc., to monitor the and identify key environmental factors by tracking marketing trends; for example, demographic research and other data can prove to be invaluable for use as marketing tools. By using technology, such ...Download file to see next pagesRead More
Share:
Tags
Cite this document
(“Environmental Factors Case Study Example | Topics and Well Written Essays - 1250 words”, n.d.)
Environmental Factors Case Study Example | Topics and Well Written Essays - 1250 words. Retrieved from https://studentshare.org/miscellaneous/1500540-environmental-factors

CHECK THESE SAMPLES OF Environmental Factors

With the help of this strategy, it can survive and grow on the skin, mucosal surfaces and...
10 Pages(2500 words)Case Study

...1. Assess the key macro factors that have influenced the UK grocery retailing industry since the early 1960s. The concept of organisational change is inherently intertwined with external threats and opportunities, which businesses must adapt to as part of strategic planning to continue long term growth. Senior and Fleming argue that the concept of organisational change has many faces, namely “convergent changes and transformational change that is organisation wide and characterised by radical shifts in strategy, mission values and associated changes of structures and systems” (In Thompson & Martin, 2005, p.41). Moreover, Johnson et al highlight that external macro-economic factors intrinsically impact strategy management and without...
13 Pages(3250 words)Assignment
sponsored ads
Save Your Time for More Important Things
Let us write or edit the case study on your topic "Environmental Factors" with a personal 20% discount.
GRAB THE BEST PAPER

Let us find you another Case Study on topic Environmental Factors for FREE!