Comments (0)
Add to wishlistDelete from wishlist
Cite this document
Summary
From historical perspective, the two Han regimes were long lived, and they successfully institutionalized and elaborated much of what Qin initiated. The Former (or Western) Han dynasty ruled from Liu Bang's victory over his rivals in 202 BCE until usurpation by a high court official, Wang Mang, in 9 CE (Pirazzoli-T'Serstevens 33)…
Download full paperFile format: .doc, available for editing
HIDE THIS PAPERGRAB THE BEST PAPER98% of users find it useful 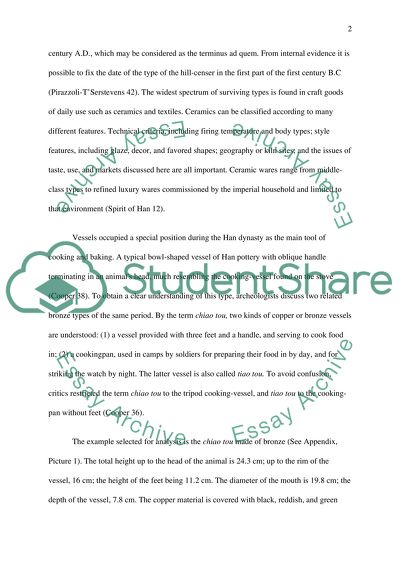 Download file to see previous pages This period from 25 to 220 CE differed from its earlier namesake (Pirazzoli-T'Serstevens 34).
As regards the chronology of the Han ceramics, the dates furnished by two pieces are of primary importance, the one, 133 B.C., found by Bushell on a vase of the Dana collection; and the other, 52 B.C., on a jug (Pirazzoli-T'Serstevens 40). There is another vase bearing the year-period Shn chek, i.e., 61-57 B.C.; but the reading of this inscription is still obscure. On the basis of these data, archeologists presume that this pottery originated in the second and first centuries before our era, although it may well be that some pieces belong to the first century A.D., which may be considered as the terminus ad quem. From internal evidence it is possible to fix the date of the type of the hill-censer in the first part of the first century B.C (Pirazzoli-T'Serstevens 42). The widest spectrum of surviving types is found in craft goods of daily use such as ceramics and textiles. Ceramics can be classified according to many different features. Technical criteria, including firing temperature and body types; style features, including glaze, decor, and favored shapes; geography or kiln sites; and the issues of taste, use, and markets discussed here are all important. Ceramic wares range from middle-class types to refined luxury wares commissioned by the imperial household and limited to that environment (Spirit of Han 12).
Vessels occupied a special position during the Han dynasty as the main tool of cooking and baking. A typical bowl-shaped vessel of Han pottery with oblique handle terminating in an animal's head, much resembling the cooking-vessel found on the stove (Cooper 38). To obtain a clear understanding of this type, archeologists discuss two related bronze types of the same period. By the term chiao tou, two kinds of copper or bronze vessels are understood: (1) a vessel provided with three feet and a handle, and serving to cook food in; (2) a cookingpan, used in camps by soldiers for preparing their food in by day, and for striking the watch by night. The latter vessel is also called tiao tou. To avoid confusion, critics restricted the term chiao tou to the tripod cooking-vessel, and tiao tou to the cooking-pan without feet (Cooper 36).
The example selected for analysis is the chiao tou made of bronze (See Appendix, Picture 1). The total height up to the head of the animal is 24.3 cm; up to the rim of the vessel, 16 cm; the height of the feet being 11.2 cm. The diameter of the mouth is 19.8 cm; the depth of the vessel, 7.8 cm. The copper material is covered with black, reddish, and green spots. According to the verbal explanation of a Chinese archologist at Hsi an, the animal forming the handle is "the scaly dragon" and the vessel was used like a ladle, for scooping water, the long neck of the chiao serving as handle (Cooper 37). The animal's neck and feet are curved in a different manner. The neck is joined to the vessel by means of two small parallel pieces, but the whole is made in one cast. The mouth of the monster is wide open. The feet are rounded out, and the lower ends are evidently worked into hoofs. Around the body of the vessel are four parallel raised lines, the so-called "girdle- ornament." Through the ...Download file to see next pagesRead More
Share:
Tags
Cite this document
(“Models of art ( anthropology ) Essay Example | Topics and Well Written Essays - 1500 words”, n.d.)
Retrieved from https://studentshare.org/miscellaneous/1500452-models-of-art-anthropology

CHECK THESE SAMPLES OF Models of art ( anthropology )

Under the balance of payment approach, the domestic cost of foreign currency is established like the cost of any other article of trade. In other words, the market demand and supply curvatures are intersected in the exchange market for that particular foreign currency. The modeling of the abovementioned approach related to the demand and supply for foreign exchange is quite...
13 Pages(3250 words)Term Paper

...Graffiti: Art or Crime? by Graffiti is a common way of expression for humanity since ancient times but the attitude to it remains controversial. To define whether graffiti is a crime or art it is important to know the difference between such graffiti styles such as “bombing” and “burning”. The last one serves as a means of self-expression and in most cases requires solid painting skills, understanding of composition, colors, and technique. This type of graffiti is connected to social protest against injustice in most cases. Serious pieces of “burning” can take different forms: black and white, colorful, depicting people and parodying known masterpieces. Simple “bombing” with huge tags can hardly be considered art because it lacks...
8 Pages(2000 words)Case Study
sponsored ads
Save Your Time for More Important Things
Let us write or edit the essay on your topic "Models of art ( anthropology )" with a personal 20% discount.
GRAB THE BEST PAPER

Let us find you another Essay on topic Models of art ( anthropology ) for FREE!