Comments (0)
Add to wishlistDelete from wishlist
Cite this document
Summary
1) HSBC has a slogan. It is 'The Worlds Local Bank'. Explain how this can be justified. In other words, is this statement true If you were asked to act in HSBC's defense to justify their slogan, what would you say In 250 words, write your answer, linking it to Relationship Marketing.
…
Download full paperFile format: .doc, available for editing
HIDE THIS PAPERGRAB THE BEST PAPER93.5% of users find it useful 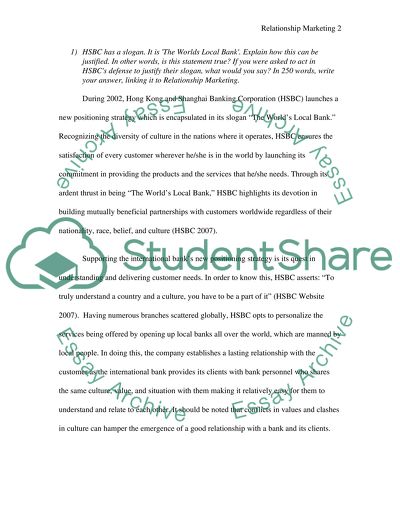 Download file to see previous pages Through its ardent thrust in being "The World's Local Bank," HSBC highlights its devotion in building mutually beneficial partnerships with customers worldwide regardless of their nationality, race, belief, and culture (HSBC 2007).
Supporting the international bank's new positioning strategy is its quest in understanding and delivering customer needs. In order to know this, HSBC asserts: "To truly understand a country and a culture, you have to be a part of it" (HSBC Website 2007). Having numerous branches scattered globally, HSBC opts to personalize the services being offered by opening up local banks all over the world, which are manned by local people. In doing this, the company establishes a lasting relationship with the customer as the international bank provides its clients with bank personnel who shares the same culture, value, and situation with them making it relatively easy for them to understand and relate to each other. It should be noted that conflicts in values and clashes in culture can hamper the emergence of a good relationship with a bank and its clients. HSBC puts a strong emphasis in local knowledge and uses it as a competitive advantage in attracting and retaining customers.
Being a local bank doesn't mean that a branch is isolated from the HSBC system. Each of the company's local bank shares the innovation and ideas in the network. All of these advancements are geared in providing customer satisfaction all over the world (HSBC Website 2007).
2) HSBC manages to attract and retain their customers very well on a global level. How do they manage to do this Link your answer to the way they advertise (to attract) and to Relationship Marketing, specifically the topic customer retention.
Attracting and retaining customers has been in the core of HSBC's operation which is highlighted in the company's high retention of customers in the global market. HSBC's effort in attracting and retaining their customers is in part because of their effort in localizing the products and services that they offer. The international bank manages retain customer because of its customized services which are tailored specifically to each of its client's needs.
Retaining customers has also been possible because of the company's investment in a customer relationship management database which can be accessed by bank personnel when dealing with a client. The use of customer relationship management allows the bank to record the profile of a customer together with his or her potential banking needs. With this, the international bank retains customer through the identification and provision of his financial needs. HSBC has been able to employ a more targeted marketing approach because of its knowledge of its customer. The company also allows customers to access their account through different means by maintaining an extensive ATM facility, website, and telephone (HSBC Website 2007).
Customer retention is also made possible by the employment of personnel which are very much attuned to customers' satisfaction. HSBC's recognizes that its products have an intangible component which is the quality of service that its staff offers. ...Download file to see next pagesRead More
Share:
Tags
Cite this document
(“Hong Kong and Shanghai Banking Corporation Case Study”, n.d.)
Hong Kong and Shanghai Banking Corporation Case Study. Retrieved from https://studentshare.org/miscellaneous/1500308-hong-kong-and-shanghai-banking-corporation

CHECK THESE SAMPLES OF Hong Kong and Shanghai Banking Corporation

The justification behind the establishment of Sinopec Corp. was to "diversify the ownership structure, abide by the rules of the market economy, and establish a modern enterprise system". Sinopec Corp. issued 16.78 billion H shares in Hong Kong, New York and London on Oct. 18th and 19th, 2000. The Company floated 2.8 billion A-shares in Shanghai Stock Exchange on July 16th, 2001. The Company’s current total number of shares is 86.702 billion, of which 67.92% is held by the State through Sinopec Group, 9.5% by domestic banks and assets management companies (AMCs), 19.35% by foreign investors and 3.23% by investors at home.
The Company is acknowledged as one of the biggest energy and chemical firms in China. The scope of...
7 Pages(1750 words)Case Study

Business Strategy of the Able Corporation

Now that Walden International has shown its intentions to acquire the company, it presents a fresh lease of life for Able Corporation and an opportunity to recoup and consolidate its position. For a successful acquisition to take place the potential acquirer needs to have a high degree of clarity on the kind of acquisition that one would want, knowledge about the key distribution channels and the industry segmentation. The acquirer takes a proactive role. Walden International, therefore, must have done some pre-acquisition studies and analysis and the aggressive manner in which the company has been presenting itself to the world by explaining each quarter its financial gains, will help Able Corporation to pool its resources, put i...
10 Pages(2500 words)Assignment

Organizational growth is possible through a strategic approach. Growth is to make business innovations through a combination of theory and practice of business strategy(Koller & Lecher 2007), creation of organizational capabilities (Peter quoted by Kettunen 2007), and bridge-building between what is today, what is desired tomorrow (West-Burnham, 1994 quoted by Kettunen, n.d). The principle of strategic planning is linked to short-term and long-term planning (Kettunen, n.d.). However, “strategies and business change with time and there is no need for loading ourselves with piles of speculation (Murdoch quoted by McQuade, 2006). In light of the above discussion strategic planning assumes a dynamic nature guided by suitabil...
10 Pages(2500 words)Case Study

It is said that “The starting point for my analysis of corporate resource allocation and its governance is a concern with the dynamics of enterprise and economic performance. Central to the process through which successful enterprises and econ...
17 Pages(4250 words)Case Study

Let us find you another Case Study on topic Hong Kong and Shanghai Banking Corporation for FREE!