Comments (0)
Add to wishlistDelete from wishlist
Cite this document
Summary
The four pieces of literature all foster a sense of unity and interconnectedness in order to reinforce justice and to encourage people to fulfill their ethical responsibilities. In "Letter from a Birmingham Jail" and President Kennedy's Inaugural Address, they both draw on religious references of God's love to everyone in America in order to argue for freedom and liberty for all regardless of their differences in race and socioeconomic status as God's love unite all of them…
Download full paperFile format: .doc, available for editing
HIDE THIS PAPERGRAB THE BEST PAPER91.7% of users find it useful 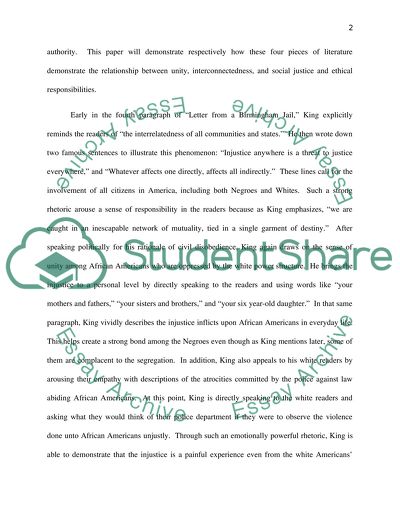 Download file to see previous pages Oliver's poem argues for the importance of fulfilling the ethical responsibility to preserve the ancestors' work, and that such a familial obligation outweigh monetary benefits. The narrator feels the need to fulfill such a responsibility because she is connected to her ancestors and it would be unjust for her to forgo the effort of them just for an economic gain. The subject matter on Cochise's speech, on the other hand, is more similar to that of King's as Cochise is fighting for freedom for the Apaches and their right for self-determination. Similar to King, Cochise rhetoric strongly demonstrates his sense of unity with his people although he has fought in bloody struggles, at the end he too wants to make peace like King, provided that the oppressors would relinquish their absolute authority. This paper will demonstrate respectively how these four pieces of literature demonstrate the relationship between unity, interconnectedness, and social justice and ethical responsibilities.
Early in the fourth paragraph of "Letter from a Birmingham Jail," King explicitly reminds the readers of "the interrelatedness of all communities and states." He then wrote down two famous sentences to illustrate this phenomenon: "Injustice anywhere is a threat to justice everywhere," and "Whatever affects one directly, affects all indirectly." These lines call for the involvement of all citizens in America, including both Negroes and Whites. Such a strong rhetoric arouse a sense of responsibility in the readers because as King emphasizes, "we are caught in an inescapable network of mutuality, tied in a single garment of destiny." After speaking politically for his rationale of civil disobedience, King again draws on the sense of unity among African Americans who are oppressed by the white power structure. He brings the injustice to a personal level by directly speaking to the readers and using words like "your mothers and fathers," "your sisters and brothers," and "your six year-old daughter." In that same paragraph, King vividly describes the injustice inflicts upon African Americans in everyday life. This helps create a strong bond among the Negroes even though as King mentions later, some of them are complacent to the segregation. In addition, King also appeals to his white readers by arousing their empathy with descriptions of the atrocities committed by the police against law abiding African Americans. At this point, King is directly speaking to the white readers and asking what they would think of their police department if they were to observe the violence done unto African Americans unjustly. Through such an emotionally powerful rhetoric, King is able to demonstrate that the injustice is a painful experience even from the white Americans' standpoint. This helps unite all American citizens regardless of skin color as they would both have a similar reaction when they witness or experience such atrocities. Thus, it becomes the ethical responsibility of all to help eradicate the segregation policy and other forms of oppression in the society.
Throughout the whole letter, King ...Download file to see next pagesRead More
Share:
Tags
Cite this document
(“Justice and Ethical Responsibilities Book Report/Review”, n.d.)
Justice and Ethical Responsibilities Book Report/Review. Retrieved from https://studentshare.org/miscellaneous/1500137-justice-and-ethical-responsibilities

CHECK THESE SAMPLES OF Justice and Ethical Responsibilities

They are on trial and will be dealt with fairly. These laws ensure that no one, even if he or she has committed a crime is abused or punished cruelly.
Following the history of civilization like in china, we see the traces of systems for Criminal justice in order to provide safety for the citizens. Evolving through the years laws have been modified and changed to form the system that we know today.
From its start, the “U.S. criminal justice system” has advocated the idea of “checks and balances”. To avoid dictatorial rule, the people who founded this system in such a way that one person was not given control or authority completely to punish the criminals. The idea of assigning a ‘jury...
6 Pages(1500 words)Assignment
sponsored ads
Save Your Time for More Important Things
Let us write or edit the book report/review on your topic "Justice and Ethical Responsibilities" with a personal 20% discount.
GRAB THE BEST PAPER

Let us find you another Book Report/Review on topic Justice and Ethical Responsibilities for FREE!