Comments (0)
Add to wishlistDelete from wishlist
Cite this document
Summary
Inflation means a sustained increase in the general price level in an economy. The recent debate in leading newspapers and magazines of the world is about the rising food prices and its impacts on the poor nations. The debates are now driven by the soaring oil prices and rising commodity prices…
Download full paperFile format: .doc, available for editing
HIDE THIS PAPERGRAB THE BEST PAPER97.4% of users find it useful 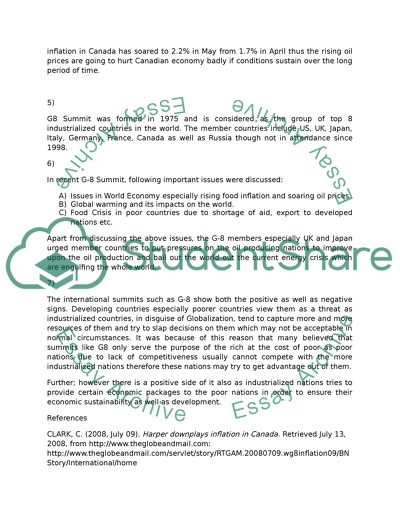 1) Inflation means a sustained increase in the general price level in an economy. The recent debate in leading newspapers and magazines of the world is about the rising food prices and its impacts on the poor nations. The debates are now driven by the soaring oil prices and rising commodity prices. The central banks of Canada, EU and US are seeing increasing inflation as a worrying sign however, Canadian Political leaders seems not to worry much about it as compared to the political leaders in US and EU. Overall concern is shown less for the inflation within the country as compared to inflation and its impacts on the poor nations.
However inflation in rest of the world is seeing with great skepticism. Many political leaders view it as a failure of the policies of the governments especially in developing countries. Inflation, especially food inflation is on rise on those countries therefore there inflation is now more defined in terms of political terms rather than in economic terms.
2)
Prime Minister, Stephen Harper, seems not much worried about the inflation in the country. His stance seems to be in-line with US. Stephen Harper believes that sluggish economic growth is the main reason for the current economic problems whereas inflation is not the main cause of it. (CLARK, 2008) However the stance of the central bank of Canada is slightly different as compared to Mr. Stephen Harper as they view inflation as a worrying sign.
3)
Since Canadian economy is largely based on service sector therefore strong Canadian dollar is helping it. However it must be noted that the falling US economy has pushed for the relocation of the US factories to Canada which is helping Canada as strong Canadian dollar against US dollar provide. Further as the increase in the value of Canadian dollar sustain the overall attractiveness of the Canadian Products will increase therefore countries like China and India, Canada will be a better alternative as compared to US.
4)
It is believed that rising oil prices in the world markets are going to hurt the Canadian economy too sooner or later. "The impact of galloping crude and gasoline prices are bubbling deeper into the Canadian economy, raising the spectre of higher interest rates to contain newly-ignited and increasingly widespread inflation pressures." (Scotton, 2008). Thus it is felt that the immediate impact of the same would be in terms of increasing inflationary pressures on the economy. This may seem to be contradictory of the political stance of the leaders of the Canada which is not considering it as economic threat. The signs are already in place as the inflation in Canada has soared to 2.2% in May from 1.7% in April thus the rising oil prices are going to hurt Canadian economy badly if conditions sustain over the long period of time.
5)
G8 Summit was formed in 1975 and is considered as the group of top 8 industrialized countries in the world. The member countries include US, UK, Japan, Italy, Germany, France, Canada as well as Russia though not in attendance since 1998.
6)
In recent G-8 Summit, following important issues were discussed:
A) Issues in World Economy especially rising food inflation and soaring oil prices.
B) Global warming and its impacts on the world.
C) Food Crisis in poor countries due to shortage of aid, export to developed nations etc.
Apart from discussing the above issues, the G-8 members especially UK and Japan urged member countries to put pressures on the oil producing nations to improve upon the oil production and bail out the world out the current energy crisis which are engulfing the whole world.
7)
The international summits such as G-8 show both the positive as well as negative signs. Developing countries especially poorer countries view them as a threat as industrialized countries, in disguise of Globalization, tend to capture more and more resources of them and try to slap decisions on them which may not be acceptable in normal circumstances. It was because of this reason that many believed that summits like G8 only serve the purpose of the rich at the cost of poor as poor nations due to lack of competitiveness usually cannot compete with the more industrialized nations therefore these nations may try to get advantage out of them.
Further; however there is a positive side of it also as industrialized nations tries to provide certain economic packages to the poor nations in order to ensure their economic sustainability as well as development.
References
CLARK, C. (2008, July 09). Harper downplays inflation in Canada. Retrieved July 13, 2008, from http://www.theglobeandmail.com: http://www.theglobeandmail.com/servlet/story/RTGAM.20080709.wg8inflation09/BNStory/International/home
Scotton, G. (2008, June 19). Rising oil prices will continue to drive inflation up: analyst. Retrieved July 13, 2008, from Calgary Herald: http://www.canada.com/calgaryherald/news/story.htmlid=b1a4df0f-2fc4-4a58-a206-51e8167bc312 Read More
Share:
Tags
Cite this document
(“International Business - Inflation Essay Example | Topics and Well Written Essays - 500 words”, n.d.)
International Business - Inflation Essay Example | Topics and Well Written Essays - 500 words. Retrieved from https://studentshare.org/miscellaneous/1500114-international-business-inflation

... sense power consumption and power quality. A modest sheet of paper, 50,000 thinner than human hair, when stacked, nets a material 500 times stronger than steel and is changing the way airplanes, automobiles and electronics are made (Alpern, 2009). International Technological collaborations are taking place in the form of strategic alliances, joint ventures and intimate supplier-producer relationships. Such collaborations include activities such as joint development agreements, technology sharing and R&D contracts amongst others (Rycroft, 2002). ICT has pervaded every aspect of business and today the value chain depends on the use of technology to link the customers and suppliers. In the current dynamic and global markets, technology...
7 Pages(1750 words)Coursework
sponsored ads
Save Your Time for More Important Things
Let us write or edit the essay on your topic "International Business - Inflation" with a personal 20% discount.
GRAB THE BEST PAPER

Let us find you another Essay on topic International Business - Inflation for FREE!