Comments (0)
Add to wishlistDelete from wishlist
Cite this document
Summary
The principle objective of the four experiments outlined below was to test various techniques for developing memory. By determining which of these methods was most effective at enhancing my memory, I hope to enhance my learning in the future by applying the information I obtain from this experiment…
Download full paperFile format: .doc, available for editing
HIDE THIS PAPERGRAB THE BEST PAPER93.6% of users find it useful 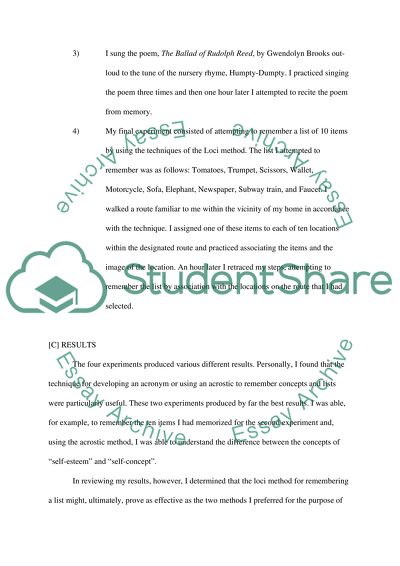 Information] February 3, 2006 Psychology Report on Experimentations Developing Memory Techniques [A] OBJECTIVE. The principle objective of the four experiments outlined below was to test various techniques for developing memory. By determining which of these methods was most effective at enhancing my memory, I hope to enhance my learning in the future by applying the information I obtain from this experiment. For example, if I discover that I am best able to memorize lists of information by developing an acronym, I may apply this method to discover if the acronym is as effective for memorizing poems or concepts as it is for memorizing lists.
[B] METHOD.
The four experiments outlined below were performed in an effort to test the various types of memory development processes.
1) I devised an acrostic poem relating to the concepts of "self-esteem" and "self-concept". I studied the poem I had developed for 2 minutes. One hour later, I attempted to recall both the acrostic poem and the concepts to which it was related.
2) I developed an acrostic to help me to remember this grocery list:
Eggs, Milk, Cheese, Laundry Soap, Shampoo, Fruit, Bread, Plastic wrap
3) I sung the poem, The Ballad of Rudolph Reed, by Gwendolyn Brooks out-loud to the tune of the nursery rhyme, Humpty-Dumpty. I practiced singing the poem three times and then one hour later I attempted to recite the poem from memory.
4) My final experiment consisted of attempting to remember a list of 10 items by using the techniques of the Loci method. The list I attempted to remember was as follows: Tomatoes, Trumpet, Scissors, Wallet, Motorcycle, Sofa, Elephant, Newspaper, Subway train, and Faucet. I walked a route familiar to me within the vicinity of my home in accordance with the technique. I assigned one of these items to each of ten locations within the designated route and practiced associating the items and the image of the location. An hour later I retraced my steps, attempting to remember the list by association with the locations on the route that I had selected.
[C] RESULTS
The four experiments produced various different results. Personally, I found that the technique for developing an acronym or using an acrostic to remember concepts and lists were particularly useful. These two experiments produced by far the best results. I was able, for example, to remember the ten items I had memorized for the second experiment and, using the acrostic method, I was able to understand the difference between the concepts of "self-esteem" and "self-concept".
In reviewing my results, however, I determined that the loci method for remembering a list might, ultimately, prove as effective as the two methods I preferred for the purpose of developing educational games or interactive learning tools. The principle reason for this, I believe, is that the principle of the method may be expounded in a controlled environment. In other words, when the technique is being used in the context of a game, the game can be designed to feature locations that are particularly related to the items or concepts that the subject or player of the game is attempting to memorize. Read More
Share:
Tags
Cite this document
(“Psychology (various techniques for developing memory) Essay”, n.d.)
Psychology (various techniques for developing memory) Essay. Retrieved from https://studentshare.org/miscellaneous/1499670-psychology-various-techniques-for-developing-memory

CHECK THESE SAMPLES OF Psychology (various techniques for developing memory)

...Context of the Paper To begin with, the of the paper is very much apt for the content. Although the could have come up with a more direct title, the title “Developing a Research base for Intravenous Peripheral cannula re-sites. A randomized controlled trial” captures the essence of the paper and what the authors aim to address. They, however, could have made it more direct to the point by maybe saying that the study is about a comparison between 3 day cannula re-sites and cannula re-sites as dictated by clinical condition. Nonetheless, the chosen t title is suitable enough to briefly inform the reader of the topic of the research. Two hypotheses were tested in this paper. There are two groups that were compared in the paper... of the Paper ...
6 Pages(1500 words)Case Study

The Myers’ Briggs Personality Test draws from Jung’s theory of personality and lists 16 personality types. People who come under the type of ESTJ have a tendency to actively take charge and organize things. They take responsibility to complete their jobs in a perfect manner (Morris & Maisto, 2005, p. 70). They are quick to decide and may tend to be aggressive. They tend to be conscientious and...
6 Pages(1500 words)Assignment
sponsored ads
Save Your Time for More Important Things
Let us write or edit the essay on your topic "Psychology (various techniques for developing memory)" with a personal 20% discount.
GRAB THE BEST PAPER

Let us find you another Essay on topic Psychology (various techniques for developing memory) for FREE!