Comments (0)
Add to wishlistDelete from wishlist
Cite this document
Summary
Talk to her in an encouraging way and help her to involve in other activities. Speech therapies can be arranged to improve her slurred speech. She can be made to interact with people in the society and move with them in a friendly manner. All these will improve her self confidence and will help her to participate in the weekly masses…
Download full paperFile format: .doc, available for editing
HIDE THIS PAPERGRAB THE BEST PAPER94.7% of users find it useful 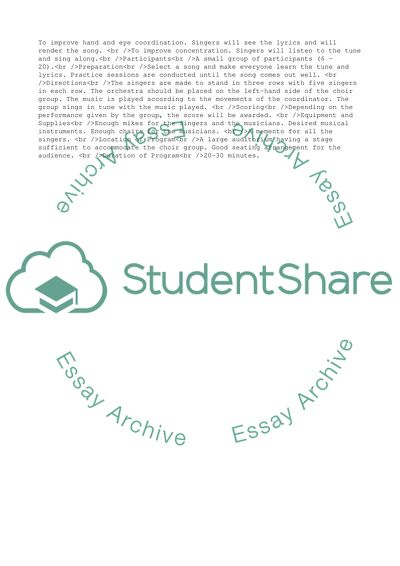 Social Service Work Motivational methods to encourage Ethel Aces to attend programs and activities Ethel Aces was affected with paralysis on the left side. As a recreation assistant I will converse with her in such a way that motivates and boosts up her self confidence.
Talk to her in an encouraging way and help her to involve in other activities. Speech therapies can be arranged to improve her slurred speech. She can be made to interact with people in the society and move with them in a friendly manner. All these will improve her self confidence and will help her to participate in the weekly masses. It will also enable her to attend other programs and activities.
Mrs.Skirving's interest and a program plan according to her level and ability
Category Social
Program Name Choir Singing
Goal
To promote teamwork and coordination. This enables people to interact in a friendly way.
Objectives
To improve hand and eye coordination. Singers will see the lyrics and will render the song.
To improve the concentration. Singers will listen to the tune and sing along.
Participants
Small group of participants (6 - 20).
Preparation
Select a song and make everyone learn the tune and lyrics. Practice sessions are conducted till the song comes out well.
Directions
The singers are made to stand in three rows with five singers in each row. The orchestra should be placed on the left hand side of the choir group. The music is played according to the movements of the coordinator. The group sings in tune with the music played.
Scoring
Depending on the performance given by the group, score will be awarded.
Equipment and Supplies
Enough mikes for the singers and the musicians. Desired musical instruments. Enough chairs for the musicians.
A memento for all the singers.
Location of Program
A large auditorium having a stage sufficient to accommodate the choir group. Good seating arrangement for the audience.
Duration of Program
20-30 minutes. Read More
Share:
Tags
Cite this document
(“Social Service Assignment Example | Topics and Well Written Essays - 500 words”, n.d.)
Social Service Assignment Example | Topics and Well Written Essays - 500 words. Retrieved from https://studentshare.org/miscellaneous/1499189-social-service

CHECK THESE SAMPLES OF Social Service

For example, it has been said that when you are a participant of a certain senior center, the possibility of you getting mental complications as well as other health complications is uh-heard of (Glass, T. A. 1999 p.479).
In this regard, this paper will asses the impacts of attending a seniors center and whether attendance is better than not attending when one becomes old. Comparisons between the two will be carried out and will base on the following,
The elderly are people who have gone through a series of steps in life from a state where they are stable in terms of health and independence in the day to day running of their lives to a state of increased vulnerability, dependence and recurring illnesses (Jeremy, M. 2008...

6 Pages(1500 words)Article
sponsored ads
Save Your Time for More Important Things
Let us write or edit the assignment on your topic "Social Service" with a personal 20% discount.
GRAB THE BEST PAPER

Let us find you another Assignment on topic Social Service for FREE!