Comments (0)
Add to wishlistDelete from wishlist
Cite this document
Summary
All through history, Australia's biggest trading partner has been Europe and especially the UK (Snape, 1969). This has been mainly due to the relationship these two countries built during colonization and UK's need for new markets for its products as well as a source for raw materials (IMF, 1999)…
Download full paperFile format: .doc, available for editing
HIDE THIS PAPERGRAB THE BEST PAPER95.6% of users find it useful 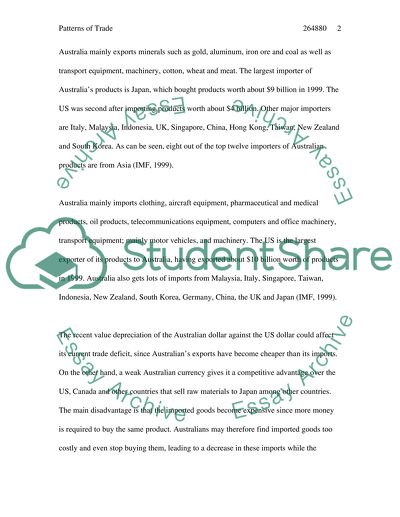 Download file to see previous pages This led to very close ties with the Middle East, South America, US, Singapore, Japan and other South East Asian countries in terms of trade. The failure of a number of South East Asian economies such as Hong Kong, Thailand and Indonesia in the 1990s had little impact on the economy of Australia. Even the political events in the neighboring countries, such as commotions in Fiji and Indonesia, have had no effect on Australia's international trade (IMF, 1999).
Australia mainly exports minerals such as gold, aluminum, iron ore and coal as well as transport equipment, machinery, cotton, wheat and meat. The largest importer of Australia's products is Japan, which bought products worth about $9 billion in 1999. The US was second after importing products worth about $4 billion. Other major importers are Italy, Malaysia, Indonesia, UK, Singapore, China, Hong Kong, Taiwan, New Zealand and South Korea. As can be seen, eight out of the top twelve importers of Australian products are from Asia (IMF, 1999).
Australia mainly imports clothing, aircraft equipment, pharmaceutical and medical products, oil products, telecommunications equipment, computers and office machinery, transport equipment; mainly motor vehicles, and machinery. The US is the largest exporter of its products to Australia, having exported about $10 billion worth of products in 1999. Australia also gets lots of imports from Malaysia, Italy, Singapore, Taiwan, Indonesia, New Zealand, South Korea, Germany, China, the UK and Japan (IMF, 1999).
The recent value depreciation of the Australian dollar against the US dollar could affect its current trade deficit, since Australian's exports have become cheaper than its imports. On the other hand, a weak Australian currency gives it a competitive advantage over the US, Canada and other countries that sell raw materials to Japan among other countries. The main disadvantage is that the imported goods become expensive since more money is required to buy the same product. Australians may therefore find imported goods too costly and even stop buying them, leading to a decrease in these imports while the exports continue increasing. If this continues, it could lead to a drop in the deficit level (OECD, 2003).
Japan
Table 1: Japan's international trade
Year
Value of Imports
Value of Exports
1975
US$58
US$56
1980
US$141
US$130
1985
US$130
US$177
1990
US$235
US$288
1995
US$336
US$443
1998
US$280
US$388
Source: IMF Financial Statistics Yearbook 1999
Japan benefited from big trade surpluses in the 1980s mainly due to its diversified manufacturing sector and its restrictive tariffs and regulations that locked out international competition in order to protect its local market (Krugman, 1992). However, Japans trading partners and competitors such as the US forced it open up its economy in the 1980s, resulting in increased imports and decreased surpluses in the 1990s, reaching US$ 144 in 1994 and dropping further to US$84 two years later (IMF, 1999).
Japan mainly imports fishery products, agricultural products, fuel, minerals, raw materials, machinery and equipment. On the other han ...Download file to see next pagesRead More
Share:
Tags
Cite this document
(“Patterns of Trade A Closer Look at Two Countries Essay”, n.d.)
Retrieved from https://studentshare.org/miscellaneous/1499167-patterns-of-trade-a-closer-look-at-two-countries

“Patterns of Trade A Closer Look at Two Countries Essay”, n.d. https://studentshare.org/miscellaneous/1499167-patterns-of-trade-a-closer-look-at-two-countries.
Comments (0)
Click to create a comment or rate a document

Although A Tale of Two Cities: Recalled to Life is decidedly a much lighter read than Sir Thomas Malory’s Le Morte D’Arthur, its language still requires concentration otherwi...

According to statistics released by the World Health Organization (WHO), currently, 180 million people worldwide have diabetes, with 2.9 million deaths per year occurring due to complications cau...

6 Pages(1500 words)Article
sponsored ads
Save Your Time for More Important Things
Let us write or edit the essay on your topic "Patterns of Trade A Closer Look at Two Countries" with a personal 20% discount.
GRAB THE BEST PAPER

Let us find you another Essay on topic Patterns of Trade A Closer Look at Two Countries for FREE!