Comments (0)
Add to wishlistDelete from wishlist
Cite this document
Summary
This research "A View of the Cultural Divide: Same-Sex Marriage" will describe contemporary situation with the contemporary gay relationship situation in the United States. Moreover, the paper talks about some anti-gay movements…
Download full paperFile format: .doc, available for editing
HIDE THIS PAPERGRAB THE BEST PAPER96.3% of users find it useful 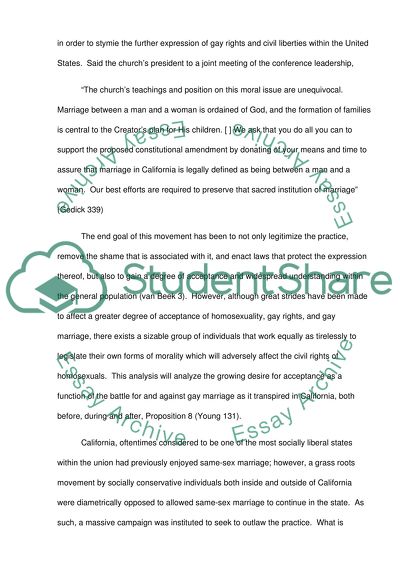 Extract of sample "A View of the Cultural Divide: Same-Sex Marriage"

Download file to see previous pages This anti-gay rights movement takes many forms; however, for the sake of argument and due to the brief nature of this essay, the author will concentrate on the actions of the Church of Jesus Christ of Latter Day Saints (Mormons) as indicative of anti-homosexual rights with relation to the support for and subsequent passage of California’s Proposition 8. The role of the church’s leadership and doctrines is of primal importance within such an analysis due to the fact that only through understanding these can one begin to understand the frenetic nature that the church is willing to go to in order to stymie the further expression of gay rights and civil liberties within the United States. Said the church’s president to a joint meeting of the conference leadership,
“The church’s teachings and position on this moral issue are unequivocal. Marriage between a man and a woman is ordained of God, and the formation of families is central to the Creator’s plan for His children. [ ] We ask that you do all you can to support the proposed constitutional amendment by donating of your means and time to assure that marriage in California is legally defined as being between a man and a woman. Our best efforts are required to preserve that sacred institution of marriage” (Gedick 339)
The end goal of this movement has been to not only legitimize the practice, remove the shame that is associated with it, and enact laws that protect the expression thereof, but also to gain a degree of acceptance and widespread understanding within the general population (van Beek 3). However, although great strides have been made to affect a greater degree of acceptance of homosexuality, gay rights, and gay marriage, there exists a sizable group of individuals that work equally as tirelessly to legislate their own forms of morality which will adversely affect the civil rights of homosexuals. This analysis will analyze the growing desire for acceptance as a function of the battle for and against gay marriage as it transpired in California, both before, during and after, Proposition 8 (Young 131). California, oftentimes considered to be one of the most socially liberal states within the union had previously enjoyed same-sex marriage; however, a grass roots movement by socially conservative individuals both inside and outside of California were diametrically opposed to allowed same-sex marriage to continue in the state. As such, a massive campaign was instituted to seek to outlaw the practice. What is especially noteworthy about the campaign that sought to outlaw the practice is the type of nefarious means they employed to deprive Californian citizens from their right under the law to wed as they pleased. Rather than being a grass-roots campaign that originated and was funded within California, the campaign to promote Proposition 8 was heavily supported by key elements within the Republican Party from all over the United States. One such key element was the Church of Jesus Christ of Latter Day Saints – also known as the Mormon Church. This particular religious group began a grass-roots movement ...Download file to see next pagesRead More
Share:
Tags
Cite this document
(“A View of the Cultural Divide: Same-Sex Marriage Research Paper”, n.d.)
A View of the Cultural Divide: Same-Sex Marriage Research Paper. Retrieved from https://studentshare.org/miscellaneous/1461143-a-view-of-the-cultural-divide-same-sex-marriage

CHECK THESE SAMPLES OF A View of the Cultural Divide: Same-Sex Marriage

... in society but I believe that our ideas about the family need to evolve and change with time. I believe that women should have to work outside of the home if they choose to but also feel that the father’s place at the head of the household needs to be assured. I am a little confused with this one because I want to say that total equality is best but I also believe that Indo-Chinese society can teach the West a little bit about how different sexes relate to one another. There is far less tension and conflict in the culture that I grew up in. I know that honesty is very important and understand it to be a very good virtue. This is another value that I agree with (Cole, 1997; Yip, 2000; Indonesia, 2009)). Communication Style...
7 Pages(1750 words)Essay

As a function of this, this book proved to be a pivotal and seminal work within the genre of cross-cultural understanding as, even though it was a novel, it helped to open the eyes of many in and around the country as to the unique set of situations that individuals experienced as a function of not only being bi-racial and living in a juxtaposition of two alternate societies but attempting to draw a sense of personal identity between the two and forging a third as a result. Furthermore, although not the express intent of the book, the issues of assimilation and the firm choice that the second generation immigrant must make between the culture of their parents and the unique aspects of the culture that they have been raised into.
sponsored ads
Save Your Time for More Important Things
Let us write or edit the research paper on your topic "A View of the Cultural Divide: Same-Sex Marriage" with a personal 20% discount.
GRAB THE BEST PAPER

Let us find you another Research Paper on topic A View of the Cultural Divide: Same-Sex Marriage for FREE!