Comments (0)
Add to wishlistDelete from wishlist
Cite this document
Summary
The following research paper will discuss the nature of mental illness and the consequence of the justice system providing punishment where illness has impaired the perceptions of an individual to the point that they have become a problem for law enforcement…
Download full paperFile format: .doc, available for editing
HIDE THIS PAPERGRAB THE BEST PAPER91.6% of users find it useful 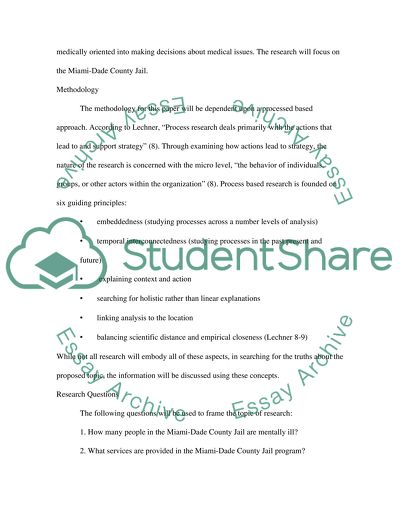 Extract of sample "People in Jails with Mental Illness"

Download file to see previous pages The methodology for this paper will be dependent upon a processed based approach. According to Lechner, “Process research deals primarily with the actions that lead to and support strategy”. Through examining how actions lead to strategy, the nature of the research is concerned with the micro level, “the behavior of individuals, groups, or other actors within the organization”. Process based research is founded on six guiding principles:
 embeddedness (studying processes across a number levels of analysis)
 temporal interconnectedness (studying processes in the past present and future)
 explaining context and action
 searching for holistic rather than linear explanations
 linking analysis to the location
 balancing scientific distance and empirical closeness
While not all research will embody all of these aspects, in searching for the truths about the proposed topic, the information will be discussed using these concepts.
Research Questions
The following questions will be used to frame the topic of research:
1. How many people in the Miami-Dade County Jail are mentally ill?
2. What services are provided in the Miami-Dade County Jail program?
3. What is the police procedure concerning citizens who have broken the law but appear to be suffering from a mental illness?
4. What is the legal criteria to determine if someone is afforded mental illness care within the Miami-Dade County Jail system?
Through secondary research, the Miami-Dade County Jail system will be assessed and reviewed in relationship to the research questions.
Miami-Dade County Corrections and Rehabilitation Department The most recent statistics, from June 11, 2011, show that there are 6,218 inmates in the Miami-Dade County Corrections and Rehabilitation Department. Of those inmates, 5,743 are male and 475 are female. The largest percentage of the population are between the age of 18 and 34, representing 3,603 of the inmates. Of the inmates, 4,226 are there for felony charges with 4,455 of those inmates are at the partial sentence portion of their process. Miami-Dade County, at least by present statistics, seems to be primarily defined by male inmates who are still waiting for the full measure of their punishment to be sentenced. Mentally Ill Citizens in Prison In 2004, an undertaking was given to the grand jury to determine the state of the jail system in regard to mental illness. The task was taken up by the district attorney’s office to investigate the state of mental illness as it has been experienced within ...Download file to see next pagesRead More
Share:
Tags
Cite this document
(“People in Jails with Mental Illness Research Paper”, n.d.)
Retrieved from https://studentshare.org/miscellaneous/1425227-people-in-jails-with-mental-illness

“People in Jails With Mental Illness Research Paper”, n.d. https://studentshare.org/miscellaneous/1425227-people-in-jails-with-mental-illness.
Comments (0)
Click to create a comment or rate a document

CHECK THESE SAMPLES OF People in Jails with Mental Illness

The second aim is to then consider the objections to th...

The ways in which the treatment of young offenders is differentiated from that of adult offenders are also presented using appropriate literature; particular reference is made to the role of Young Offender Institutions (YOI). It is proved that the current criminal justice for young offenders in the UK is not effective, despite the measures taken by the government for securing the rehabilitation of these individuals. On the other hand, the full alignment of the treatment of young offenders with that of the adult offenders, as this practice is in progress in the UK, will not resolve the problems related to the rehabilitation of young offenders. The alteration of the rules of the existing criminal justice system without eliminating t...
7 Pages(1750 words)Coursework
sponsored ads
Save Your Time for More Important Things
Let us write or edit the research paper on your topic "People in Jails with Mental Illness" with a personal 20% discount.
GRAB THE BEST PAPER

Let us find you another Research Paper on topic People in Jails with Mental Illness for FREE!