Comments (0)
Add to wishlistDelete from wishlist
Cite this document
Summary
Anorexia nervosa is a complex multifaceted psychiatric disorder that focuses on food, with an underlying motive to look perfect by strictly regulating food intake and controlling weight. Therefore, to this extent it is also an eating disorder. Today, anorexia nervosa has become…
Download full paperFile format: .doc, available for editing
HIDE THIS PAPERGRAB THE BEST PAPER91.6% of users find it useful 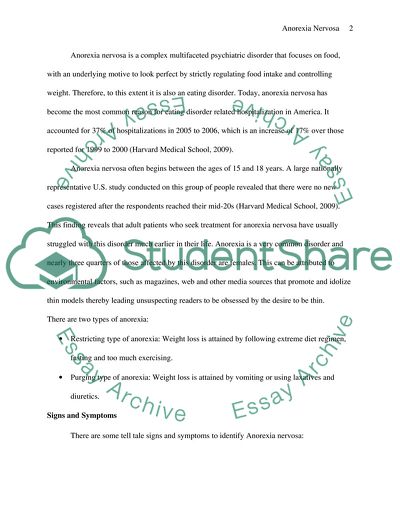 Download file to see previous pages A large nationally representative U.S. study conducted on this group of people revealed that there were no new cases registered after the respondents reached their mid-20s (Harvard Medical School, 2009). This finding reveals that adult patients who seek treatment for anorexia nervosa have usually struggled with this disorder much earlier in their life. Anorexia is a very common disorder and nearly three quarters of those affected by this disorder are females. This can be attributed to environmental factors, such as magazines, web and other media sources that promote and idolize thin models thereby leading unsuspecting readers to be obsessed by the desire to be thin.
Physical signs of anorexia: Physical signs of anorexia include excessive weight loss without any medical cause, dry skin, thinning of hair, poor or no menstrual periods in women, feeling cold or presence of swelling in extremities of limbs, downy hair covering the body, low blood pressure, fatigue and/or abnormal heart rhythms.
Psychological and behavioral signs: Psychological and behavioral signs of anorexia include feeling fat despite being underweight, refusing to eat, not able to remember things, refusing to accept low body weight as a problem, depression and obsessive-compulsive behaviors like frequently checking weight, following extreme exercise regimen and/or pretending or lying about eating.
Weight loss or lack of expected gain: Significant loss of weight without any medical reason is one of the main indicators to identify Anorexia Nervosa. A loss of 5 to 10 pounds in a healthy individual is a matter of concern and should be followed-up (Dubansky, 2010). The annual health checkup is a good time to track adequate weight gain in children and identify significant weight loss in adults. Anorexia during the initial phase can go unnoticed even by physicians because a lot of attention is given to obesity and related issues.
Sudden change in eating habits: Behaviors that ...Download file to see next pagesRead More
Share:
Tags
Cite this document
(“Anorexia Nervosa, Control Issues, signs and symptoms, Term Paper”, n.d.)
Anorexia Nervosa, Control Issues, signs and symptoms, Term Paper. Retrieved from https://studentshare.org/miscellaneous/1414344-anorexia-nervosa-control-issues-signs-and-symptoms

Community life has its advantages but also has its limitations to the members and the outsiders.
“The good things we secure for ourselves are uncertain and precious until it is secured for everyone and incorporated into our common life.”-Jane Addams. With society moving faster and more detached to technology, busy schedules, and job changes, it becomes harder and harder to feel a sense of community. This can result in a life of solitude and a lose a sense of belonging. Community life helps extract people out of this solitude life and introduce better, challenging and fun tasks such as participation in acts of kindness. It also provides room for volunteering, meeting neighbors, discussing important issues with othe...
7 Pages(1750 words)Case Study
sponsored ads
Save Your Time for More Important Things
Let us write or edit the term paper on your topic "Anorexia Nervosa, Control Issues, signs and symptoms," with a personal 20% discount.
GRAB THE BEST PAPER

Let us find you another Term Paper on topic Anorexia Nervosa, Control Issues, signs and symptoms, for FREE!