Comments (1)
Add to wishlist Delete from wishlist
Cite this document
Summary
The study would help in generating genetic markers which may be used for characterization and distribution of the sub-populations of the parasites. Moreover, the study would help in understanding the disease pathology of mutant strains and derive anti-malarial drugs that will effective on the mutants as well…
Download full paper File format: .doc, available for editing
HIDE THIS PAPERGRAB THE BEST PAPER91.2% of users find it useful 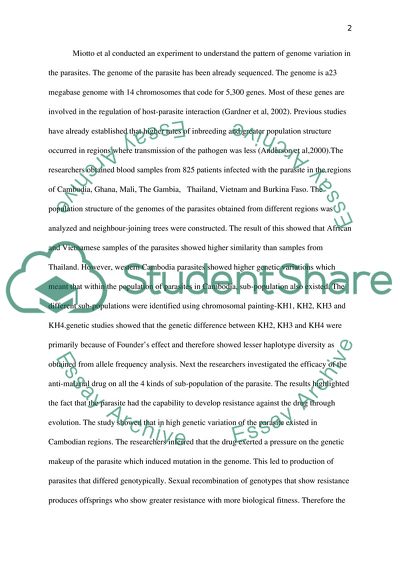 Parasitic Parasites s
Miotto,O. et al. (2013). Multiple populations of artemisinin-resistant Plasmodium
falciparum in Cambodia.Nature Genetics, 45 (6),648-655. Retrieved from http://www.ncbi.nlm.nih.gov/pmc/articles/PMC3807790/.
In the warm tropical regions malaria remains one of the most deadly diseases resulting in high rates of morbidity and mortality. Each year millions of people fall prey to the disease and therefore Malaria is of immense public health concern. Malaria maybe caused by one of the four species of Plamodium parasites-Plasmodium falciparum, P.vivax. P.ovale and P.malariae. However, Plasmodium falciparum is found all around the world especially in the tropics and kills more than 1 million African children each year (Gardner et al, 2002).The infectivity of the parasite has been extensively studied. P.falciparum infected females mosquitoes transmit the sporozoites into human blood stream when they suck blood. The spoprozoites enter the blood stream and infects hepatic cells where they mature and produce merozoites which subsequently become trophozoites while some merozoites become sexual gametocytes. The infection causes shivering and persistent fever. These gametocytes are primarily responsible for transmission of the parasite from the infected human to the vector mosquito (Bousema and Drakeley). Presently Artemisinin is one of the most widely used drugs to treat Plasmodium falciparum infections such as malaria which helps in prevention of spread of malaria. However recent studies have shown that some mutants of P.falciparum have developed resistance to the drug especially along the Thailand-Cambodia border (Witkowski et al,2010).
Miotto et al conducted an experiment to understand the pattern of genome variation in the parasites. The genome of the parasite has been already sequenced. The genome is a23 megabase genome with 14 chromosomes that code for 5,300 genes. Most of these genes are involved in the regulation of host-parasite interaction (Gardner et al, 2002). Previous studies have already established that higher rates of inbreeding and greater population structure occurred in regions where transmission of the pathogen was less (Anderson et al,2000).The researchers obtained blood samples from 825 patients infected with the parasite in the regions of Cambodia, Ghana, Mali, The Gambia, Thailand, Vietnam and Burkina Faso. The population structure of the genomes of the parasites obtained from different regions was analyzed and neighbour-joining trees were constructed. The result of this showed that African and Vietnamese samples of the parasites showed higher similarity than samples from Thailand. However, western Cambodia parasites showed higher genetic variations which meant that within the population of parasites in Cambodia, sub-population also existed. The different sub-populations were identified using chromosomal painting-KH1, KH2, KH3 and KH4.genetic studies showed that the genetic difference between KH2, KH3 and KH4 were primarily because of Founder’s effect and therefore showed lesser haplotype diversity as obtained from allele frequency analysis. Next the researchers investigated the efficacy of the anti-malarial drug on all the 4 kinds of sub-population of the parasite. The results highlighted the fact that the parasite had the capability to develop resistance against the drug through evolution. The study showed that in high genetic variation of the parasite existed in Cambodian regions. The researchers inferred that the drug exerted a pressure on the genetic makeup of the parasite which induced mutation in the genome. This led to production of parasites that differed genotypically. Sexual recombination of genotypes that show resistance produces offsprings who show greater resistance with more biological fitness. Therefore the study established that in Cambodia the emergence of drug-resistant parasite was a result of out-crossing of resistant strains and maintenance of the particular combination of alleles.
The study focussed on the genetic evolution of the parasite P.falciparum. Cambodia is known to be hot-spot for development of anti-malarial drug resistance and this study helps in understanding how exactly genetic mutations taking place within the parasite increase chances of development of resistance. This study helps in understanding the genetic evolutionary pattern of the parasite and hence is important to design management strategies to control multiple forms of resistance. The study would also help in generating genetic markers which may be used for characterization and distribution of the sub-populations of the parasites. Moreover, the study would help in understanding the disease pathology of mutant strains and derive anti-malarial drugs that will effective on the mutants as well.
Reference
Anderson TJ, et al.(2000). Microsatellite markers reveal a spectrum of population structures
in the malaria parasite Plasmodium falciparum. Mol Biol Evol.17:1467–82
Bousema,T., and Drakeley,G.(2011). Epidemiology and Infectivity of Plasmodium
falciparum andPlasmodium vivax Gametocytes in Relation to Malaria Control and Elimination. Clinical microbiology reviews, 24 (2), 377-410.
Gardner,M.J., et al.(2002). Genome sequence of the human malaria parasite Plasmodium
falciparum. Nature, ;419(6906):498-511
Miotto,O. et al. (2013). Multiple populations of artemisinin-resistant Plasmodium
falciparum in Cambodia.Nature Genetics, 45 (6),648-655. Retrieved from http://www.ncbi.nlm.nih.gov/pmc/articles/PMC3807790/.
Witkowski, B. Et al.(2000).Increased Tolerance to Artemisinin in Plasmodium falciparum Is
Mediated by a Quiescence Mechanism. Antibacterial Agents and Chemotherapy, 54 (5), 1872-1875. Read More
Share:
Tags
Cite this document
(“Parasitic Parasites Essay Example | Topics and Well Written Essays - 750 words”, n.d.)
Parasitic Parasites Essay Example | Topics and Well Written Essays - 750 words. Retrieved from https://studentshare.org/medical-science/1664981-parasitic-parasites

ke
kevonvon added comment 1 year ago
Student rated this paper as
At first, I thought 3 of pages is too much for such a topic. But now I see it could not be done smarter. As the author starts you see the complexity of the issue. I’ve read all at once. Wonderful paper

CHECK THESE SAMPLES OF Parasitic Parasites

...? Commensal and Parasitic Barnacles Barnacles are arthropods belonging to Cirripedia under subphylum Crustacea. It is therefore related to crabs and other forms of sea crustaceans. The only difference between barnacles and the other arthropods is that the former have sessile species, or species that cannot move from one place to another. Barnacles are both commensals and parasites. As commensals, barnacles usually benefit from their hosts by having a place to stay, and being carried to nutrient-rich areas of the sea (“Hitchhiker”). Although the host animal, such as whales, does not benefit from barnacles attached to its body, the host remains unaffected. On the other hand, parasitic barnacles bore through the exoskeleton of the host...
6 Pages (1500 words) Term Paper

Many microbial infections are described as opportunistic. What do you understand by this termGive a bacterial, parasitic

...? Infectious Disease and Processes Infectious Disease and Processes Opportunistic Infections Generally, the word opportunistic refers to a situation where something/someone takes an immediate unethical advantage of a particular circumstance in order to achieve specific benefits. Jones et al (2000, p. 1026) explain that some micro-organisms are said to be opportunistic since they cannot infect a person under normal circumstances, but are found to take advantage and cause disease when the immune system of the body is impaired. Thus, opportunistic infection is seen to manifest itself only when a person is ill and the body defense mechanisms are affected. At this time, the opportunistic organisms get an opportunity to spread as well... Infectious ...
4 Pages (1000 words) Essay

...?Infection and Immunity Table of Contents Introduction 3 Discussion 3 Conclusion 5 6 References 7 7 Introduction Parasite burden is often related to those diseases which possess severe consequences of infection causing renal failure or bladder cancer (Jong & Stevens, 2011; WHO, 2013). Various environmental changes that are largely linked with population intensification, development in water resources and population movements, has day after day contributed towards the increasing rate of parasitic burden in the current environmental setting. This particular disease syndrome, i.e. parasite or parasitic burden, can be found in dissimilar regions throughout the globe, impacting the physical, social and psychological aspects of humankind...
3 Pages (750 words) Essay

...HUMAN PARASITIC WORMS The roundworms, the flukes, and the tapeworms are responsible for parasitic worm infestation in humans. The roundwormscause diseases such as enterobiasis, ascariasis, and necatoriasis; the flukes are responsible for schistosomiasis, while the tapeworms cause taeniasis. Parasitic worms are contacted by ingestion of their eggs/cysts, or by the penetration of exposed human skin on exposure by the larvae. In all worm infestations, complications usually arise from heavy presence of worms, and there are even research evidence (though not conclusive) to suggest that the presence of a minimal level of worms could play an important role in the treatment of some allergic and auto immune diseases. A holistic approach...
6 Pages (1500 words) Essay

...The mating game- Gonochorism and degrees of monogamy in schistosomes Schistosomiasis, or bilharzia is a parasitic disease caused by trematodes of the genus schistosoma and is considered by the world health organization as the second most important disease only to malaria, infecting hundreds of millions globally. Schistosomes themselves are as intriguing as the disease itself, exhibiting attributes that are unique to the genus (Combes 1991). One such attributes is the distinct sexual dimorphism as opposed to hermaphrodism which is the rule in other species of trematodes. This feature among schistosomes is very interesting as it is usually considered that dioecy is disadvantageous to parasites. This article essays the implication...
12 Pages (3000 words) Essay

...Using specific examples, compare how inflammatory and hypersensitive reactions to parasites can be a defence of the hosts against the parasites and also a disease problem for the hosts. Abstract Inflammatory and hypersensitive reactions when appropriate are protective as part of the hosts defence against parasites, but may also be detrimental to the host by causing extensive tissue damage, allergy, or autoimmunity. Marcelo U. Ferreira et al (2004) point at the intriguing developments in the antibody antigen reactions that have seen to the development of clinical resistance to interventions against some parasites that has come up due to induced immunity as in the case of the malaria causing parasite. A parasite is “an animal which lives...
8 Pages (2000 words) Term Paper

Cytomegalovirus-immunocompromised host (CMV) is a type of virus that belongs to the Herpes viruses. The virus causes diseases in different parts of human beings bodies such as the Cytomegalovirus retinitis disease. The CMV infections occur in individuals whose immune system has been weakened by AIDS, organ transplant, chemotherapy, bone marrow transplants or medicines that are capable of suppressing the immune system. A CMV infection affects different parts of the body such as the esophagus, the stomach, the intestines, eye and the lungs. Once the CMV enters a person’s body, it remains alive and dominant within the host’s body. This virus can only cause diseases only when the host immune system is suppressed because of...
1 Pages (250 words) Assignment

...Molecular Mechanisms used by Adult Schistosoma Worms to Survive in the Bloodstream By: Ahmed Aljeraisi Advanced Molecular and Medical Parasitology Id Number: 2011113503 Location: University of Hull Date of submission: 16/11/2012 Introduction Schistosomes consist of a genus of trematodes, which belong to the Platyhelminthes phylum. They are parasites that live in the vascular system, and mature as separate-sex entities in the veins of birds and mammals. Schistosomes are the causative agent of Schistosomiasis or bilharzia, which is approximated to affect more than two hundred million individuals in seventy six developing nations. Schistosome eggs often become lodged in the tissues of the host, and they are the major cause of pathology...
11 Pages (2750 words) Essay
sponsored ads
Save Your Time for More Important Things
Let us write or edit the essay on your topic "Parasitic Parasites" with a personal 20% discount.
GRAB THE BEST PAPER

Let us find you another Essay on topic Parasitic Parasites for FREE!