Comments (0)
Add to wishlist Delete from wishlist
Cite this document
Summary
The paper "Open Market Operations During the Recent Financial Crisis" states that When the financial crisis began in 2008 and the economy started experiencing recessionary pressures, the Fed started reducing interest rates to provide impetus to the market. Finally, in December 2008, the interest rates reached its lowest at 0-0.25 per cent. …
Download full paper File format: .doc, available for editing
HIDE THIS PAPERGRAB THE BEST PAPER94.7% of users find it useful 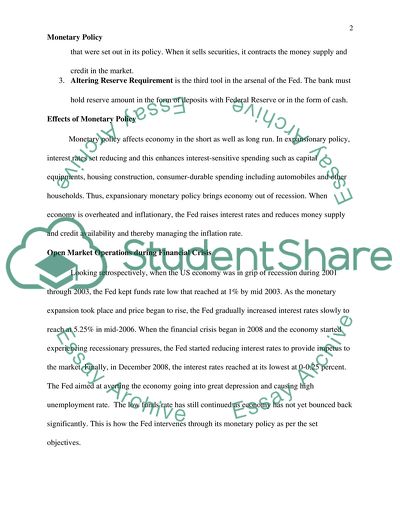 ﻿Monetary Policy
Introduction
The Federal Reserve (the Fed) sets monetary policy time -to-time influencing the availability of money and credit. The Fed is an ultimate lender to the nation's financial system ensuring the smooth functioning of financial markets and maintaining adequate liquidity. This was what observed during the recent financial crisis observed in 2008 and onwards.
The paper is an attempt to see how the open market operations during the recent financial crisis were carried out to provide much needed liquidity in the financial market.
The Federal Reserve has three means at its disposal to achieve its goals.
1. The Discount Rate charged to banks and other depository institutions when they borrow from the Fed. The Fed offers three kinds of credit facilities-- primary, secondary and seasonal credit with different interest rates. Primary credit is given to depository institutions for a very short term (overnight). The primary credit is available to institutions with sound financials. The institutions not eligible for primary credit may go for secondary credit to meet their short-term liquidity requirements. The smaller depository institutions go for seasonal credit to meet their funding needs during their lean periods. The examples are agricultural banks. The discount rate for primary credit is set above short-term interest rates. The rate on secondary credit is set above the primary credit rate.
2. Open Market Operations called so because the Fed intervenes by purchasing and selling of US Treasury securities from the open markets. The objective is to set the federal funds rate. When the Fed buys the securities, it issues currency expanding money in the market and credit. Stability and sustainable economic growth were two objectives that were set out in its policy. When it sells securities, it contracts the money supply and credit in the market.
3. Altering Reserve Requirement is the third tool in the arsenal of the Fed. The bank must hold reserve amount in the form of deposits with Federal Reserve or in the form of cash.
Effects of Monetary Policy
Monetary policy affects economy in the short as well as long run. In expansionary policy, interest rates set reducing and this enhances interest-sensitive spending such as capital equipments, housing construction, consumer-durable spending including automobiles and other households. Thus, expansionary monetary policy brings economy out of recession. When economy is overheated and inflationary, the Fed raises interest rates and reduces money supply and credit availability and thereby managing the inflation rate.
Open Market Operations during Financial Crisis
Looking retrospectively, when the US economy was in grip of recession during 2001 through 2003, the Fed kept funds rate low that reached at 1% by mid 2003. As the monetary expansion took place and price began to rise, the Fed gradually increased interest rates slowly to reach at 5.25% in mid-2006. When the financial crisis began in 2008 and the economy started experiencing recessionary pressures, the Fed started reducing interest rates to provide impetus to the market. Finally, in December 2008, the interest rates reached at its lowest at 0-0.25 percent. The Fed aimed at averting the economy going into great depression and causing high unemployment rate. The low funds rate has still continued as economy has not yet bounced back significantly. This is how the Fed intervenes through its monetary policy as per the set objectives.
Reference
Open Market Operations (2011), online March 31, 2012 from http://www.federalreserve.gov/monetarypolicy/openmarket.htm Read More
Share:
Tags
Cite this document
(“Open Market Operations During the Recent Financial Crisis Book Report/Review”, n.d.)
Open Market Operations During the Recent Financial Crisis Book Report/Review. Retrieved from https://studentshare.org/marketing/1770283-paper-on-the-federal

...? Reasons for the recent global financial crisis Introduction The cause of the recent financial crisis and economic recessions has been attributed to various factors in the economy (Freedman 2010). The initial trigger of the financial crisis has been traced to the toxic mortgage backed assets whose decline in value and uncertain duration led to massive losses in the U.S economy. Fannie Mae and Freddie Mac were both taken over by the US government. Lehman Brothers was declared bankrupt since it could not increase its capitalization (Joseph 8). Merrill Lynch was bought by the Bank of America while American International Group (AIG) was rescued by the Federal government through an $ 85 billion capital bailout. Washington Mutual...
8 Pages (2000 words) Essay

...?The Recent Global Financial Crisis Introduction: The recent global crisis that the world suffered from had started developing for a while before it had its impacts in the middle of the year 2007 and then in 2008 (Obstfeld & Rogoff, 2009, p.1). The crisis affected the entire world with fall in the stock markets, financial institutions being sold out or warped leading to the emergency need for rescue packages from the governments in order to bail out the severely impacted financial firms. The primary cause of the global recession could be addressed to the collapse that occurred in the sub-prime mortgage market in the United States (US) accompanied by turnaround of housing as reported by several other economies. The impact of the global...
6 Pages (1500 words) Essay

... Predator Nation: Financial Book Review Charles Ferguson’s book Predator Nation offers a lucid explanation of the corporate intrigues and unethical business greed that underpinned the financial crisis of 2008. The book paints a broader picture of the large network of corporate conspirators who, in their different roles, but working towards a common purpose ruined the growth of America’s economy through money-based approaches. The author contends that much of the damage that was done to the economy was as a result of the systematic undermining of the principles of good corporate management and the twisting of financial policies in ways that served the short-term interests of banking institutions and other connected players in the money...
3 Pages (750 words) Essay

...Global Economic Crisis Question Choice of Mess The mess that I have selected is the global financial and economic crisis, with particular reference to the on-going ‘mess’ it has created in the global arena. At present, probably there is no economy in the world that is not affected due to this crisis. Even, as I see, countries those are seemingly isolated from the world such as Iran, are also affected herewith. This is of tremendous interest to me, simply because such a huge crisis is something that is not a very regularly occurring event, and being at the age that I am right now, I believe I will have stories to share with my off springs, whereby, I can tell them that I have seen the world economy booming as it has been over the past few...
24 Pages (6000 words) Essay

...﻿The Recent and Current Global Financial Crisis The recent and current global financial crisis was rooted by a collapse in the value of real estate under title to US mortgage companies and a variety of banks, including banking investment houses. This collapse led to immediate and deeply disparaging effects on the financial systems of the US and Europe and resulted in an international contraction of the employment market, increasing unemployment figures in most of the important global markets. Reasons have been analyzed for the failure of the financial markets. They have included faulting banks and investment houses for speculating under high leverage and low collateral, and homeowners defaulting on mortgages. Niinimäki (2007) noted...
9 Pages (2250 words) Essay

...﻿Financial Risk Management - Goldman Sachs Bank during the Financial Crisis Goldman Sachs was one of the major investment banks (later became a bank) in US that went bankrupt but was bailed out during the financial crisis of 2008 over alleged malpractices involving shorting its subprime mortgage backed securities. Kunt, Evanoff and Kaufman (2011) define financial crisis/ distress as ‘an event in which substantial losses at financial institutions and/or the failure of these institutions cause, or threaten to cause, serious dislocations to the real economy, measured in terms of output foregone.’ Financial malpractices at Goldman Sachs bank saw its profits decline due significant losses being realized from large subprime write downs...
1 Pages (250 words) Essay

... to other airlines. Therefore, there is a need to evaluate the real impact of recent financial crisis on Turkish Airlines and the perceived passenger service quality. Moreover, it is also important to investigate the strategies of the company during the financial crisis, based on which company claims to show better performance as compared to other airlines. Research Question The research question that will be investigated in the proposed research study is as follows: To evaluate the impact of recent financial crisis on Turkish Airlines and to investigate how this crisis has affected the perceived service quality of airline passengers? Aims and Objectives The primary aim of conducting this research is to determine the areas...
7 Pages (1750 words) Case Study

During late 2007, a massive economic recession hit the entire world and most of the countries have experienced its negative consequences. The recession can be identified by decreasing GDP and industrial production and increasing unemployment. In such situations, the regulators of economy, formulate and implement effective policies to overcome recession as soon as possible. In this respect, the regulator of the c...

6 Pages (1500 words) Coursework
sponsored ads
Save Your Time for More Important Things
Let us write or edit the book report/review on your topic "Open Market Operations During the Recent Financial Crisis" with a personal 20% discount.
GRAB THE BEST PAPER

Let us find you another Book Report/Review on topic Open Market Operations During the Recent Financial Crisis for FREE!