Comments (0)
Add to wishlistDelete from wishlist
Cite this document
Summary
The paper presents consider possible factors that a European based refrigeration company would want to consider when setting its production base in a new country. The two proposed countries, namely China and Brazil are examined in terms of the existing market conditions…
Download full paperFile format: .doc, available for editing
HIDE THIS PAPERGRAB THE BEST PAPER91.5% of users find it useful 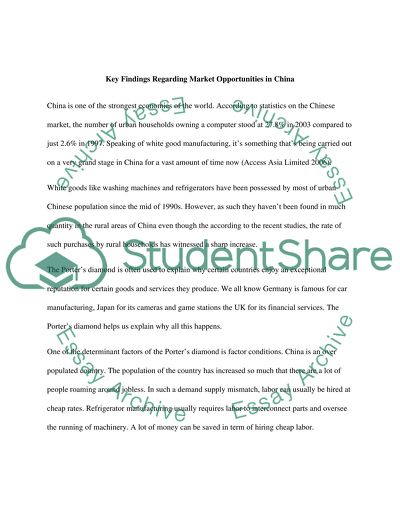 Download file to see previous pages Key Findings Regarding Market Opportunities in China China is one of the strongest economies of the world. According to statistics on the Chinese market, the number of urban households owning a computer stood at 27.8% in 2003 compared to just 2.6% in 1997. Speaking of white good manufacturing, it’s something that’s being carried out on a very grand stage in China for a vast amount of time now (Access Asia Limited 2006). White goods like washing machines and refrigerators have been possessed by most of the urban Chinese population since the mid of the 1990s. However, as such, they haven’t been found in much quantity in the rural areas of China even though the according to the recent studies, the rate of such purchases by rural households has witnessed a sharp increase. Porter’s diamond is often used to explain why certain countries enjoy an exceptional reputation for certain goods and services they produce. We all know Germany is famous for car manufacturing, Japan for its cameras and game stations in the UK for its financial services. Porter’s diamond helps us explain why all this happens. One of the determinant factors of Porter’s diamond is factor conditions. China is an overpopulated country. The population of the country has increased so much that there are a lot of people roaming around jobless. In such a demand-supply mismatch, labor can usually be hired at cheap rates. Refrigerator manufacturing usually requires labor to interconnect parts and oversee the running of machinery. A lot of money can be saved in term of hiring cheap labor. Another of the factor conditions that favor the production of electronics like refrigerators in China is the weather. The warm Chinese weather is perfect for the condensed gas found in the refrigerator’s condenser. Too hot or too cold weather often causes problems in the condenser and extra cost has to be incurred to refill the leaked gas. Demand conditions are the second factor in Porter’s diamond. There would be obviously no reason to produce goods and services where there isn’t a demand for such products. China is the most populous country in the world and with an ever-increasing population, the demand for refrigerators can be foreseen to be high in the future. In such circumstances set up a refrigerator manufacturing plant directly in China would result in an increase in profit and lowering of costs. The cost would be lowered as they refrigerators be manufactured locally and therefore wouldn’t have to imported and hence cost reduction could be experienced in the form of saving on import-related duties and taxes. Hubei is a probable location for our European based company to set up a refrigeration plant. The Hubei province is located in the middle of China and is also referred to as the natural distribution hub of China. The province of Hubei has slightly more skilled labor as compared to other parts of the country and has already well-established supply chains. The province is already home to a lot of companies ranging from telecom sector to the electronic appliance and computer equipment makers (Joint Environmental Markets 2000). Another factor from Porter’s diamond is whether there are related or supporting industries or not. It is a generally well-known fact that that industries often benefit from each other if they are located in the vicinity of related and supporting industries. In the Chinese province of Hubei, electronic suppliers overall are of a smaller size and have a limited production capacity. ...Download file to see next pagesRead More
Share:
Tags
Cite this document
(China Market Opportunity Term Paper Example | Topics and Well Written Essays - 1750 words, n.d.)
China Market Opportunity Term Paper Example | Topics and Well Written Essays - 1750 words. Retrieved from https://studentshare.org/marketing/1430531-international-business-institutions
(China Market Opportunity Term Paper Example | Topics and Well Written Essays - 1750 Words)
China Market Opportunity Term Paper Example | Topics and Well Written Essays - 1750 Words. https://studentshare.org/marketing/1430531-international-business-institutions.
“China Market Opportunity Term Paper Example | Topics and Well Written Essays - 1750 Words”, n.d. https://studentshare.org/marketing/1430531-international-business-institutions.
Comments (0)
Click to create a comment or rate a document

However, some of the recent trends have prompted the prediction that consumption of beer will go down in some of the European countries like France, Spain, and Germany. The threat of such a...
7 Pages(1750 words)Assignment
sponsored ads
Save Your Time for More Important Things
Let us write or edit the term paper on your topic "China Market Opportunity" with a personal 20% discount.
GRAB THE BEST PAPER

Let us find you another Term Paper on topic China Market Opportunity for FREE!