Comments (0)
Add to wishlistDelete from wishlist
Cite this document
Summary
He adds that environment, emotions, cognitions and motivations uniquely influence the qualities that people possess. In psychology, scholars focus on…
Download full paperFile format: .doc, available for editing
HIDE THIS PAPERGRAB THE BEST PAPER98.8% of users find it useful 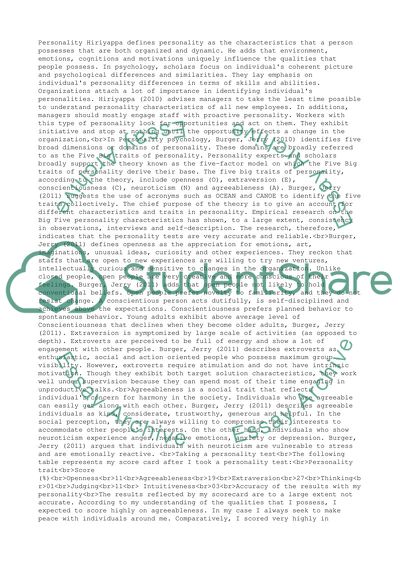 Personality Hiriyappa defines personality as the characteristics that a person possesses that are both organized and dynamic. He adds that environment, emotions, cognitions and motivations uniquely influence the qualities that people possess. In psychology, scholars focus on individual’s coherent picture and psychological differences and similarities. They lay emphasis on individual’s personality differences in terms of skills and abilities. Organizations attach a lot of importance in identifying individual’s personalities. Hiriyappa (2010) advises managers to take the least time possible to understand personality characteristics of all new employees. In additions, managers should mostly engage staff with proactive personality. Workers with this type of personality look for opportunities and act on them. They exhibit initiative and stop at nothing until the opportunity effects a change in the organization,
In Personality psychology, Burger, Jerry (2010) identifies five broad dimensions or domains of personality. These domains are broadly referred to as the Five Big traits of personality. Personality experts and scholars broadly support the theory known as the five-factor model on which the Five Big traits of personality derive their base. The five big traits of personality, according to the theory, include openness (O), extraversion (E), conscientiousness (C), neuroticism (N) and agreeableness (A). Burger, Jerry (2011) suggests the use of acronyms such as OCEAN and CANOE to identify the five traits collectively. The chief purpose of the theory is to give an account for different characteristics and traits in personality. Empirical research on the Big Five personality characteristics has shown, to a large extent, consistency in observations, interviews and self-description. The research, therefore, indicates that the personality tests are very accurate and reliable.
Burger, Jerry (2011) defines openness as the appreciation for emotions, art, imaginations, unusual ideas, curiosity and other experiences. They reckon that staffs that are open to new experiences are willing to try new ventures, intellectually curious and sensitive to changes in the organization. Unlike closed people, open people are very creative and more conscious of their feelings. Burger, Jerry (2011) adds that open people not likely to hold conventional beliefs. Open people prefer novelty to familiarity, and they do not resist change. A conscientious person acts dutifully, is self-disciplined and achieves above the expectations. Conscientiousness prefers planned behavior to spontaneous behavior. Young adults exhibit above average level of Conscientiousness that declines when they become older adults, Burger, Jerry (2011). Extraversion is symptomized by large scale of activities (as opposed to depth). Extroverts are perceived to be full of energy and show a lot of engagement with other people. Burger, Jerry (2011) describes extroverts as enthusiastic, social and action oriented people who possess maximum group visibility. However, extroverts require stimulation and do not have intrinsic motivation. Though they exhibit both target solution characteristics, they work well under supervision because they can spend most of their time engaging in unproductive talks.
Agreeableness is a social trait that reflects individual’s concern for harmony in the society. Individuals who are agreeable can easily get along with each other. Burger, Jerry (2011) describes agreeable individuals as kind, considerate, trustworthy, generous and helpful. In the social perception, they are always willing to compromise their interests to accommodate other people’s interests. On the other hand, individuals who show neuroticism experience anger, negative emotions, anxiety or depression. Burger, Jerry (2011) argues that individuals with neuroticism are vulnerable to stress and are emotionally reactive.
Taking a personality test
The following table represents my score card after I took a personality test:
Personality trait
Score (%)
Openness
11
Agreeableness
19
Extraversion
27
Thinking
01
Judging
11
Intuitiveness
03
Accuracy of the results with my personality
The results reflected by my scorecard are to a large extent not accurate. According to my understanding of the qualities that I possess, I expected to score highly on agreeableness. In my case I always seek to make peace with individuals around me. Comparatively, I scored very highly in extraversion. On the contrary, I am not an extrovert. Equally, I do not believe that I am judgmental, nor I do not think a lot.
Application of test result in my current job
For the test results to be applicable, it is important to assume that they are accurate. In each aspect of the test, I would take it as a channel to help me build on weak areas. I will apply the results in improving my performance and to enable myself to grow into a strong leader. The test will help me to improve on my communication strategy so as to avoid conflicts in management.
Advantages of personality tests
Personality tests help in narrowing the process of selecting employees. When human resource managers profile the personality of potential employees, they make it easier to identify possible candidates from the pool of applicants. In addition, personality tests reduce business expenditure during the hiring process.
Disadvantages of personality tests
Analysts and personality experts have to a large extent applied the personality test to help human resource managers in hiring staffs. Personality test, however, has its drawbacks. Hiriyappa,B (2010) laments that some people pass the personality test very well, but once they get the job, they do not carry out tasks with similar efficiency. In addition, it is quite expensive to generate computerized questions to be administered to the interviewees.
Lessons from the personality test
Through the personality test that I have taken, I have discovered the most favorable career that I can pursue. I have also discovered some of the famous personality in the world whom we share similar personality. The tests will hem me to improve on some of those traits that are undesirable in my career.
Work Cited
Burger, Jerry M. Personality. 8th ed. Australia: Wadsworth Cengage Learning, 2011.

CHECK THESE SAMPLES OF Personality

...?ESFJ I agree with this personality assessment of myself. I feel that I am for the most part extroverted because I enjoy going to parties and being with large groups specifically doing things that are fun. I would say that for the most part I operate more on gut instinct rather than through rationalization. In some cases this has been an asset to me, however in some cases the impulsivity has caused me to wind up in situations that could have been avoided using some planning. In connection to this, I feel that I am emotionally tuned. I tend to wear my heart on a sleeve, which sometimes makes me more aware of people’s emotions that can allow me to better communicate with people. The judgmental way of thinking comes out as a...
1 Pages(250 words)Essay

...17 November Personality: A Product of Physical Appearance or Not? Can people “read” someone's personality through their faces alone? This essay explores the answer to this question, as it connects the themes of personality and physical appearance in two articles, “The Naked Face” and “The Story of My Body.” “The Naked Face” provides evidence that personality and physical appearance, particularly facial expressions, affect each other. “The Story of My Body” depicts the story of the author, Julia Cofer, and her life as a Puerto Rican in American soil, where she experienced racial discrimination. Her story questions the connection between personality and...
3 Pages(750 words)Essay

...? Personality Personality It is difficult to define personality in few words because of the complex physical, psychological and environmental parameters associated with it. Different psychologists and sociologists defined personality in different ways. However, the most popular definition of personality was put word by Morton Prince. In his opinion, "Personality is the sum-total of all the biological innate dispositions, impulses, tendencies, appetites, and instincts of the individual, and the acquired dispositions and tendencies--acquired by experience”(Dr Walsh, 1999). On the other hand famous psychologist Gordon W. Allport, defined personality “as the dynamic organization within the individual of those psychophysical systems... that...
3 Pages(750 words)Essay

...Personality No: Personality Psychology is the study of thoughts, behaviors and an attitude of any person means it is the study to analyze different traits of personalities. A different trait of personality differentiates one person to another person. The main reason to study psychology is to give advantage to society. Psychology helps person personally and professionally in everyday life. Like personally if you want to give up smoking, less your weight, learn some language and skills, cognitive and educational psychology stimulate you to do the task properly. Like for...
1 Pages(250 words)Assignment

...Personality Affiliation with more information about affiliation, research grants, conflict of interest and how to contact Topic:  Personality Part 1: Personality Inventory “What’s My Basic Personality?” My basic Personality type is ENFP (Extravert-intuitive-Feeler-Perceiver). ENFPs take their relationships very seriously, but also approach them with an innocent and delicate touch. “The ENFP is often interested in the lives of others and are usually able to interact and draw out the best in people.” (Myers-Briggs Type Indicator n.d para 3). Extraversion: This trait person is enthusiastic, action-oriented. In groups they like to talk and represent attention to themselves. In this trait I scored more. My score was 14. This trait... is 8. I...
5 Pages(1250 words)Essay

...The Big Five Personality Traits The Big Five Personality Traits Introduction “Trait” refers to an individual’s regular patterns of feelings, thoughts, or actions that make them peculiar to others. A natural characteristic determines the behavioral pattern of an individual. However, psychologists have identified big five personality traits that are used for describing an individual’s behavior. They include extraversion, conscientiousness, openness, agreeableness, and Neuroticism (Costa and McCrae, 1981). These traits were first suggested by Costa and McCrae (1981) based on their Five Factor Model (FFM) which they formulated in an attempt to understand the correlation between...
2 Pages(500 words)Essay

...Personality Personality A) It is a very interesting question because in my view the answer to it is yes as animals tend to behave and react to situations in a different manner according to their temperament and personality. My view comes from many researchers and psychologists that have been conducted research over this issue such as, a psychologist from the University of Texas has proven in his research that cats, dogs, hyenas and other animals possess different personality traits (Utexas, 2012). I have personal observe that animals react and behave in different manner in similar situation or with same objects. Once I had few crabs as pets and I had...
1 Pages(250 words)Essay

...Personality Personality a. My Personality My personality type is ISTJ (Introverted, Sensing, Thinking, and Judging). I agree with the findings of this personality test to a certain degree. First, I often do not like presuming anything about a situation, person, or object before dealing with facts surrounding them. Similarly, ISTJs tend to analyze their surroundings and consult facts before making any conclusions. The personality test results say ISTJs are “no nonsense” people, which I do not often see in myself. Occasionally, I can be stubborn after making a decision about something irrespective of how small it is and...
4 Pages(1000 words)Essay
sponsored ads
Save Your Time for More Important Things
Let us write or edit the essay on your topic "Personality" with a personal 20% discount.
GRAB THE BEST PAPER

Let us find you another Essay on topic Personality for FREE!