Comments (0)
Add to wishlistDelete from wishlist
Cite this document
Summary
This term is frequently used in US in relation to its corporations. Corporate inversion is a particular form of tax avoidance…
Download full paperFile format: .doc, available for editing
HIDE THIS PAPERGRAB THE BEST PAPER96.6% of users find it useful 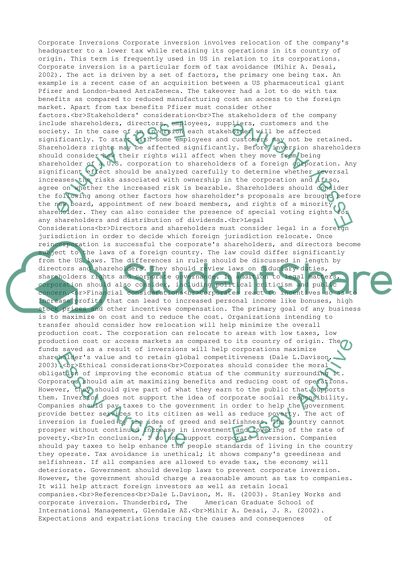 Corporate Inversions Corporate inversion involves relocation of the company’s headquarter to a lower tax while retaining its operations in its country of origin. This term is frequently used in US in relation to its corporations. Corporate inversion is a particular form of tax avoidance (Mihir A. Desai, 2002). The act is driven by a set of factors, the primary one being tax. An example is a recent case of an acquisition between a US pharmaceutical giant Pfizer and London-based AstraZeneca. The takeover had a lot to do with tax benefits as compared to reduced manufacturing cost an access to the foreign market. Apart from tax benefits Pfizer must consider other factors.
Stakeholders’ consideration
The stakeholders of the company include shareholders, directors, employees, suppliers, customers and the society. In the case of an inversion each stakeholder will be affected significantly. To start with some employees and customers may not be retained. Shareholders rights may be affected significantly. Before inversion shareholders should consider how their rights will affect when they move from being shareholder of a U.S. corporation to shareholders of a foreign corporation. Any significant effect should be analyzed carefully to determine whether reversal increases the risks associated with ownership in the corporation and if so, agree on whether the increased risk is bearable. Shareholders should consider the following among other factors how shareholder’s proposals are brought before the new board, appointment of new board members, and rights of a minority shareholder. They can also consider the presence of special voting rights for any shareholders and distribution of dividends.
Legal Considerations
Directors and shareholders must consider legal in a foreign jurisdiction in order to decide which foreign jurisdiction relocate. Once reincorporation is successful the corporate’s shareholders, and directors become subject to the laws of a foreign country. The law could differ significantly from the US laws. The differences in rules should be discussed in length by directors and shareholders. They should review laws on fiduciary duties, shareholders rights and corporate governance. In addition to legal matters, corporation should also consider, including political criticism and public concern.
Financial considerations
Corporates react to incentives so as to increase profits that can lead to increased personal income like bonuses, high stock prices and other incentives compensation. The primary goal of any business is to maximize on cost and to reduce the cost. Organizations intending to transfer should consider how relocation will help minimize the overall production cost. The corporation can relocate to areas with low taxes, low production cost or access markets as compared to its country of origin. The funds saved as a result of inversions will help corporations maximize shareholder’s value and to retain global competitiveness (Dale L.Davison, 2003).
Ethical considerations
Corporates should consider the moral obligation of improving the economic status of the community surrounding it. Corporates should aim at maximizing benefits and reducing cost of operations. However, they should give part of what they earn to the public that supports them. Inversion does not support the idea of corporate social responsibility. Companies should pay taxes to the government in order to help the government provide better services to its citizen as well as reduce poverty. The act of inversion is fueled by the idea of greed and selfishness. The country cannot prosper without continued increase in investment and lowering of the rate of poverty.
In conclusion, I do not support corporate inversion. Companies should pay taxes to help enhance the people standards of living in the country they operate. Tax avoidance is unethical; it shows company’s greediness and selfishness. If all companies are allowed to evade tax, the economy will deteriorate. Government should develop laws to prevent corporate inversion. However, the government should charge a reasonable amount as tax to companies. It will help attract foreign investors as well as retain local companies.
References
Dale L.Davison, M. H. (2003). Stanley Works and corporate inversion. Thunderbird, The American Graduate School of International Management, Glendale AZ.
Mihir A. Desai, J. R. (2002). Expectations and expatriations tracing the causes and consequences of corporate inversions Cambridge, MA.: National Bureau of Economic Research. Read More
Share:
Tags
Cite this document
(“International Management Assignment Example | Topics and Well Written Essays - 500 words - 1”, n.d.)
International Management Assignment Example | Topics and Well Written Essays - 500 words - 1. Retrieved from https://studentshare.org/management/1661898-international-management

CHECK THESE SAMPLES OF International Management

...is high. Another major issue that can arise is cultural differences. Decision making is difficult in an environment of cultural differences. It becomes difficult for a unit to accept the global policies. Moreover, the internal mobility of people will be a difficult task. In an environment where the culture is common in every office across the world, an employee from one office can easily be adapted to another office in the event of transfers. But with a transnational strategy, it becomes very difficult for an employee to adapt to the new culture where he/she is transferred. There also exist huge communication barriers. Another major issue that is related to transnational strategy is IT integration. Integrating...
3 Pages(750 words)Essay

...? International Management International management calls for maintenance and development of operations across borders with management based on knowledge and skills to integrate cross- cultural processes, environments and stakeholders in the right way. As an international activity, management is not left in the hands of managers and supervisors only but also in the hands of local and expatriate staff for an effective continuance of business cycle through planning execution and measure. To operate internationally businesses need to device channels to help them in introducing their goods and service to the...
12 Pages(3000 words)Essay

...INTERNATIONAL MANAGEMENT 10th April, 2009 Table of Contents Table of Contents 2 WHAT CULTURE IS ABOUT? 3 THEORIESOF NATIONAL CULTURE 3 National Theory of Culture on Kluckohn and Strodtbecks Value Orientation 3 Halls Cultural Contexts Model 4 Ones useful way of characterising differences in cultures is the low context-high-context approach developed by Edward and Mildred Hall. Halls Low-Context-High-Context Approach 4 In a low-context culture, the words used by the speaker explicitly convey the speakers message to the listener. Anglo-Saxon countries such as Canada, the United Kingdom, and the United States, and Germanic countries are good examples of low-context cultures. 4 In a high-context culture,...
6 Pages(1500 words)Scholarship Essay

...International Management and Section # of The need for organizational topologies is fairly evident in the world today as they assist in reducing the complexities associated with multinational enterprises to an extent that these become rather manageable. One of the most essential characteristic is that these can be used as an instrument to stimulate opinions, thinking processing and judgments on alternate directions in which decision makers can run their organizations. A typology can be even more authoritative if it is empirically supported by foretelling statements. (J, A core typology of organizational environments, 2009). Several typologies are accessible for the categorization of major contingencies of organizational operation... and...
5 Pages(1250 words)Scholarship Essay

...Question 1. What is the substantive question? International job opportunities and international job assignments have mostly been occupied by men,and women only comprise a small percentage of the population. The small number of women on international job assignments are more often anchored on the myth that women are not willing to work abroad, aside from the perception that men are better performer in international assignments; but the recent increase of women expatriates have increased contradicting the myth. The intention of women expatriates influences how well they are able to adapt in terms of interaction adjustment, socio-cultural adjustment, general and work...
2 Pages(500 words)Essay

...1. Introduction The process of globalization has changed the dynamics of international business. The emerging new economies of the developing world have made the global market more competitive, challenging and interesting. It is for these reasons that the business houses need to become less rigid and change their business and market strategy as per the socio- economic compulsions of the host countries. They must adopt versatility in the work ideology and functioning to meet the challenges international business negotiations with efficiency and unmatched proficiency. Therefore, it becomes imperative to look at the factors that have significant impact on the business negotiations. Analysis of those factors for their role and impact... on the...
5 Pages(1250 words)Essay

...relevant to ongoing companies as well as for MNCs trying to enter these markets. When making a debut into one market, and preparing an entry strategy firms need to consider very much the national culture of the company, to evaluate whether the culture will help the business to flourish or whether the cultural norms will act as hindrance to the business and profitability. Any cultural theory is based on the assumption that there is no universal method of management theory. And in this global world, doing business in other countries require knowledge and empathy with the locals of the country, hence it is important to understand and be aware of the cultural differences when handling or dealing with cross cultural groups or...
4 Pages(1000 words)Essay

...International Management I hereby submit my personal ment for a master’s degree program in international management as offered by . I have chosen to apply for the program in your institution because of its outstanding facilities and academic resources, for which it is globally recognized. I have also planned for resources, in terms of both finances and time, to allow for maximum concentration in my course of study. My intention for taking this course – my second master’s degree – is to improve my competitiveness in the job market and is partly driven by a childhood dream of becoming a globally reputable manager. Even though my previous academic...
2 Pages(500 words)Essay

...International Management ………………………….. College ……………………………… ……………….. Answers to Week 3 questions Internet and CultureInteraction People in recent years have been increasingly using internet for various purposes such as education, business, communication, and politics. Extensive use of internet is tremendously changing the way people live; their social life, family systems, education, business, culture and almost everything. From the international business perspective, internet plays very significant role in assisting business organization to carry out many of their business functions, but one major issue is that it also affects the culture worldwide. As Deresky (2011, p. 107) noted,...
17 Pages(4250 words)Essay
sponsored ads
Save Your Time for More Important Things
Let us write or edit the assignment on your topic "International Management" with a personal 20% discount.
GRAB THE BEST PAPER

Let us find you another Assignment on topic International Management for FREE!