Comments (0)
Add to wishlistDelete from wishlist
Cite this document
Summary
Many companies find it difficult to respond to disaster. The Gulf oil spill disaster demonstrates the approach of two industries towards a disaster. The National Aeronautics and Space Administration is a US agency responsible for aerospace and aeronautics research as well…
Download full paperFile format: .doc, available for editing
HIDE THIS PAPERGRAB THE BEST PAPER91.3% of users find it useful 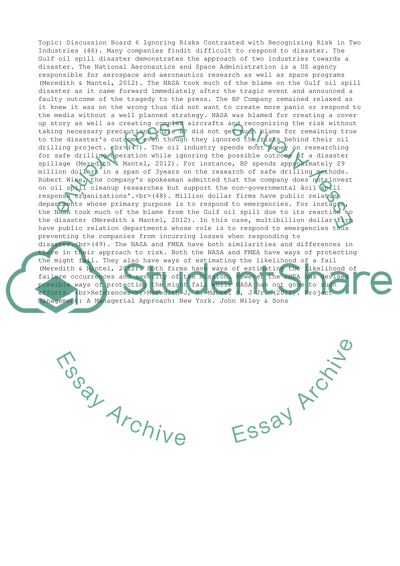 Extract of sample "Discussion Board 6"

Topic: Discussion Board 6 Ignoring Risks Contrasted with Recognizing Risk in Two Industries (46). Many companies findit difficult to respond to disaster. The Gulf oil spill disaster demonstrates the approach of two industries towards a disaster. The National Aeronautics and Space Administration is a US agency responsible for aerospace and aeronautics research as well as space programs (Meredith & Mantel, 2012). The NASA took much of the blame on the Gulf oil spill disaster as it came forward immediately after the tragic event and announced a faulty outcome of the tragedy to the press. The BP Company remained relaxed as it knew it was on the wrong thus did not want to create more panic or respond to the media without a well planned strategy. NASA was blamed for creating a cover up story as well as creating complex aircrafts and recognizing the risk without taking necessary precautions while BP did not get much blame for remaining true to the disaster’s outcome even though they ignored the risks behind their oil drilling project.
(47). The oil industry spends most money on researching for safe drilling operation while ignoring the possible outcome of a disaster spillage (Meredith & Mantel, 2012). For instance, BP spends approximately 29 million dollars in a span of 3years on the research of safe drilling methods. Robert Wine, the company’s spokesman admitted that the company does not invest on oil spill cleanup researches but support the non-governmental ‘oil spill response organizations’.
(48). Million dollar firms have public relation departments whose primary purpose is to respond to emergencies. For instance, the NASA took much of the blame from the Gulf oil spill due to its reaction to the disaster (Meredith & Mantel, 2012). In this case, multibillion dollar firm have public relation departments whose role is to respond to emergencies thus preventing the companies from incurring losses when responding to disaster.
(49). The NASA and FMEA have both similarities and differences in there in their approach to risk. Both the NASA and FMEA have ways of protecting the might fail. They also have ways of estimating the likelihood of a fail (Meredith & Mantel, 2012). Both firms have ways of estimating the likelihood of failure occurrences and severity of the mission. However the FMEA has devised possible ways of protecting the might fail while NASA has not gone to such efforts.
References
Meredith J, R. Mantel S, J Jr. (2012). Project Management: A Managerial Approach: New York. John Wiley & Sons Read More
Share:
Tags
Cite this document
(“Discussion Board 6 Assignment Example | Topics and Well Written Essays - 250 words - 1”, n.d.)
Discussion Board 6 Assignment Example | Topics and Well Written Essays - 250 words - 1. Retrieved from https://studentshare.org/management/1660756-discussion-board-6

CHECK THESE SAMPLES OF Discussion Board 6

... HERE HERE YOUR HERE HERE Formal Operational Stage of Development The question used to assess formal operational thought was, “Where would you place a third eye if you were able to establish one, and why?”. It was clear that they were grasping for abstract reasoning and looked, in some fashion, to be confused over the prospect. However, after a moment, the subject indicated that the best place would be on the surface of the right hand since this is the dominant hand and it would allow for seeing even when they were asleep. In some ways, this response was consistent with Piaget’s expectations for this stage of reasoning. Younger children might have suggested the best place for the third eye was the forehead, since they might... HERE HERE YOUR...
2 Pages(500 words)Essay

...of such a word is Bun. The word was originally coined to describe a round type of bread that is used in the making of various sandwiches. But over the years, it has also been used to describe the way a woman wears her hair in a bunched up ponytail near the top of her head. The same word, describes two different things that merely share the same shape and size. A hair bun and a bread bun. Both meaning a round and plump object with one being edible and the other not. Regional examples of the verbal differences in the meaning of words include cinema and theater. Although the words connote going to see a movie in most instances, in some regions, the theater means a the venue for a live show that is different from a movie house. We can...
1 Pages(250 words)Essay

...Effects of Adolescents’ Socio-Emotional Changes and Family Systems Adolescence is a moment when human beings undergo through many biological and physical transformations that cause great changes in the general life and conditions of individuals. This stage of development characterizes with several hormonal changes that cause stress, fears, joy as well as feelings of achievements. Most of the outcomes of adolescence tend to have particular impacts on the socio-emotional conditions of the affected persons. The socio-emotional changes faced by adolescents affect family systems and structures in certain ways. The socio-emotional changes may have either positive or negative impacts to individual family systems. According to Kail... of...
1 Pages(250 words)Assignment

...affairs, and that their sins and guilt resulted to their mental illness. Furthermore, Couture and Penn (2013) and Corrigan (2000) showed that lack of interpersonal contact with and having negative experiences of or stereotypes about people with mental illness further make some individuals think that mentally ill people cannot be trusted and that they are dangerous and do not have a strong sense of responsibility. With these negative perceptions from society, sometimes even from loved ones, people with mental illness will find it difficult to talk about depression, anxiety, and psychosis with others, including mental health professionals (Couture & Penn, 2013, p. 292). They will no longer discuss their mental illness...
1 Pages(250 words)Coursework

Principles of Management . Discussion Board # 6

... HRM Guide Question What is the HRM Guide? HRM Guide refers to an independent publisher of content relating to human resource management. It is a combination of websites with the commonality of publishing information pertaining to human resource surveys, training, research, employment law, etc. (Hrmguide.net par. 1). Question 2.Select and summarize an article on work/life balance under the "Employee Relations" HR topic. Telecommuting better than office working A telecommuter is an individual who works from home by the use of an electronic linkup with a central office. Research shows that this kind of arrangement offers more job satisfaction than an office setting even when it requires more working hours than the office. The main... HRM Guide ...
1 Pages(250 words)Term Paper
sponsored ads
Save Your Time for More Important Things
Let us write or edit the assignment on your topic "Discussion Board 6" with a personal 20% discount.
GRAB THE BEST PAPER

Let us find you another Assignment on topic Discussion Board 6 for FREE!