Comments (0)
Add to wishlistDelete from wishlist
Cite this document
Summary
Its headquarters is in Waterside, Harmondsworth in the UK. It operates primarily in Europe and USA. London is the company’s principle location for its businesses with a significant presence in London city,…
Download full paperFile format: .doc, available for editing
HIDE THIS PAPERGRAB THE BEST PAPER94.4% of users find it useful 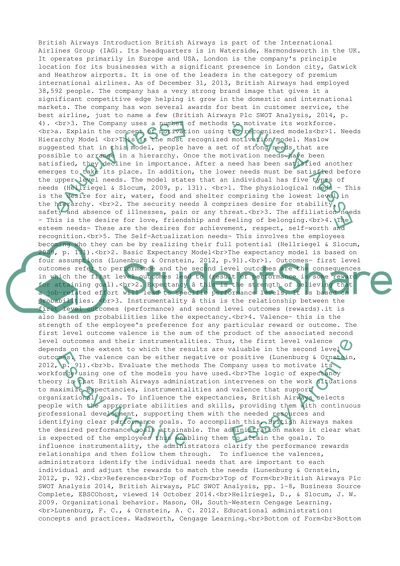 British Airways Introduction British Airways is part of the International Airlines Group (IAG). Its headquarters is in Waterside, Harmondsworth in the UK. It operates primarily in Europe and USA. London is the company’s principle location for its businesses with a significant presence in London city, Gatwick and Heathrow airports. It is one of the leaders in the category of premium international airlines. As of December 31, 2013, British Airways had employed 38,592 people. The company has a very strong brand image that gives it a significant competitive edge helping it grow in the domestic and international markets. The company has won several awards for best in customer service, the best airline, just to name a few (British Airways Plc SWOT Analysis, 2014, p. 4).
3. The Company uses a number of methods to motivate its workforce.
a. Explain the concept of motivation using two recognized models
1. Needs Hierarchy Model
This is the most recognized motivation model. Maslow suggested that in this model, people have a set of strong needs that are possible to arrange in a hierarchy. Once the motivation needs have been satisfied, they decline in importance. After a need has been satisfied another emerges to take its place. In addition, the lower needs must be satisfied before the upper level needs. The model states that an individual has five types of needs (Hellriegel & Slocum, 2009, p. 131).
1. The physiological needs - This is the desire for air, water, food and shelter comprising the lowest level in the hierarchy.
2. The security needs – comprises desire for stability, safety and absence of illnesses, pain or any threat.
3. The affiliation needs - This is the desire for love, friendship and feeling of belonging.
4. The esteem needs- These are the desires for achievement, respect, self-worth and recognition.
5. The Self-Actualization needs- This involves the employees becoming who they can be by realizing their full potential (Hellriegel & Slocum, 2009, p. 131).
2. Basic Expectancy Model
The expectancy model is based on four assumptions (Lunenburg & Ornstein, 2012, p.91).
1. Outcomes- first level outcomes refer to performance and the second level outcomes are the consequences in which the first level outcomes lead to (result of performance is some reward for attaining goal).
2. Expectancy – this is the strength of believing that a job-related effort will lead to specific performance levels. It is based on probabilities.
3. Instrumentality – this is the relationship between the first level outcomes (performance) and second level outcomes (rewards).it is also based on probabilities like the expectancy.
4. Valence- this is the strength of the employee’s preference for any particular reward or outcome. The first level outcome valence is the sum of the product of the associated second level outcomes and their instrumentalities. Thus, the first level valence depends on the extent to which the results are valuable in the second level outcomes. The valence can be either negative or positive (Lunenburg & Ornstein, 2012, p. 91).
b. Evaluate the methods The Company uses to motivate its workforce using one of the models you have used.
The logic of expectancy theory is that British Airways administration intervenes on the work situations to maximize expectancies, instrumentalities and valence that support organizational goals. To influence the expectancies, British Airways selects people with the appropriate abilities and skills, providing them with continuous professional development, supporting them with the needed resources and identifying clear performance goals. To accomplish this, British Airways makes the desired performance goals attainable. The administration makes it clear what is expected of the employees thus enabling them to attain the goals. To influence instrumentality, the administrators clarify the performance rewards relationships and then follow them through. To influence the valences, administrators identify the individual needs that are important to each individual and adjust the rewards to match the needs (Lunenburg & Ornstein, 2012, p. 92).
References
Top of Form
Top of Form
British Airways Plc SWOT Analysis 2014, British Airways, PLC SWOT Analysis, pp. 1-8, Business Source Complete, EBSCOhost, viewed 14 October 2014.
Hellriegel, D., & Slocum, J. W. 2009. Organizational behavior. Mason, OH, South-Western Cengage Learning.
Lunenburg, F. C., & Ornstein, A. C. 2012. Educational administration: concepts and practices. Wadsworth, Cengage Learning.
Bottom of Form
Bottom of Form Read More
Share:
Tags
Cite this document
(“British Airways Assignment Example | Topics and Well Written Essays - 500 words”, n.d.)
British Airways Assignment Example | Topics and Well Written Essays - 500 words. Retrieved from https://studentshare.org/management/1660492-british-airways

CHECK THESE SAMPLES OF British Airways

...? Essay on British Airways ESSAY ON BRITISH AIRWAYS “British Airways and its predecessor companies have been at the very forefrontof air transport development since the dawn of this industry. We will continue to lead in the future" (British Airways, 2004). This is according to the chairman of British Airways from 1993 to 2004, lord Marshall of Knightsbridge. While the history of BA in its current structure and name began in 1976, its predecessors can be traced back to the late ‘10s. The first British Airlines, Aircraft Transport and Travel, was...
3 Pages(750 words)Essay

...? Table of Contents Executive Summary 3 Introduction 3 The Marketing Environment 4 Pricing as BA’s marketing strategy 4 Distribution 5 Branding 6 Conclusion 6 Recommendations 7 Bibliography 8 Appendices 9 Appendix I 9 Appendix II 10 British Airways Executive Summary This report was produced to give insights into British Airways and particularly on its marketing operations. Being UK’s largest scheduled airline, a brief background on British Airways would be given so as to guide in the evaluation of its marketing practices including pricing, distribution and branding, borrowing from the airline’s website and various secondary sources....
5 Pages(1250 words)Essay

...? British Airways At the end of the 1970s and the beginning of the 1980s, British Airways found itself in a disastrous position. Then CEO, Roy Watts, wrote a desperate letter to employees of British airways stating that it will be necessary to cut any and all costs as soon as possible even to ensure that the brand remained viable through the next several months. Needless to say, more row and profitability were all but gone from the prospects that British Airways saw within the near future. However, within the course of 3 ? years, British airways was able to completely...
4 Pages(1000 words)Research Paper

...?British Airways Definition of Corporate Global Citizenship The concept of organizations developing to global citizenship has been developed in the recent past to ensure that organizations have an input on the societies they are in. Usually, the main purpose of why an organization exists is to make profit for the shareholders. However, this is not all, organizations are obliged to take care of the people that sustain it in different aspects ion order to have a corporate social responsibility. Therefore, according to the World Economic Forum, corporate global citizenship refers to the adoption of real and lasting contributions by a corporate body to societies apart from making profits for the shareholders....
4 Pages(1000 words)Essay

...﻿The Analysis of British Airways 1.0. Executive Summary With my motivation to excel in my career, I am hoping to gain a position in British Airways. The rationale of choosing this business organization is obvious. By joining a team which remains undisputed its industry, I will undoubtedly be able to efficiently utilize the knowledge and skills I've acquired from my various disciplines. This will also allow me to enhance my strengths and competencies and enable me to realize my full potential in the corporate world. British Airways can provide me with the venue that I need for growth as well as enough challenges to keep me motivated. 2.0....
4 Pages(1000 words)Essay

...Case Study Analysis – British Airways: Leadership and Change Problem definition British Airways has been a leader in the airline industry. The company which was formed on 1974 after the merger of British Overseas Airways Corporation and the British European Airways was traditionally considered as a ‘pattern’ of effective managerial structure taking into account its performance even during periods of severe financial turbulences worldwide. Despite the significant performance of the company since its first appearance in the airline industry, there are certain problems related mainly with its daily...
6 Pages(1500 words)Essay

... Table of Contents Executive Summary 3 Introduction 3 The Marketing Environment 4 Pricing asBA’s marketing strategy 4 Distribution 5 Branding 6 Conclusion 6 Recommendations 7 Bibliography 8 Appendices 9 Appendix I 9 Appendix II 10 British Airways Executive Summary This report was produced to give insights into British Airways and particularly on its marketing operations. Being UK’s largest scheduled airline, a brief background on British Airways would be given so as to guide in the evaluation of its marketing practices including pricing, distribution and branding, borrowing from the airline’s website and various secondary sources. However, this report has... the...
5 Pages(1250 words)Essay

...﻿British Airways—Introduction and History British Airways is the largest air carrier of UK and third-largest of Europe. The operations of British Airways are chiefly centred on the two London airports, Gatwick and Heathrow. The BA fleet consists of different variants of Boeing aircraft some of them fitted with British made Rolls Royce engine. British Airways came into existence in 1974 after the merger of state-run internationally run British Overseas Air Corporation (BOAC) and a mainly European British European Airway. The BOAC...
11 Pages(2750 words)Coursework
sponsored ads
Save Your Time for More Important Things
Let us write or edit the assignment on your topic "British Airways" with a personal 20% discount.
GRAB THE BEST PAPER

Let us find you another Assignment on topic British Airways for FREE!