Comments (0)
Add to wishlistDelete from wishlist
Cite this document
Summary
In Highland Park and Wilmette, the CEO owns bike shops. Compared with other Ricketts siblings, Todd ranks at the bottom of the chart based on individual profile.
-When working here, Todd learns that the maintenance…
Download full paperFile format: .doc, available for editing
HIDE THIS PAPERGRAB THE BEST PAPER98.3% of users find it useful 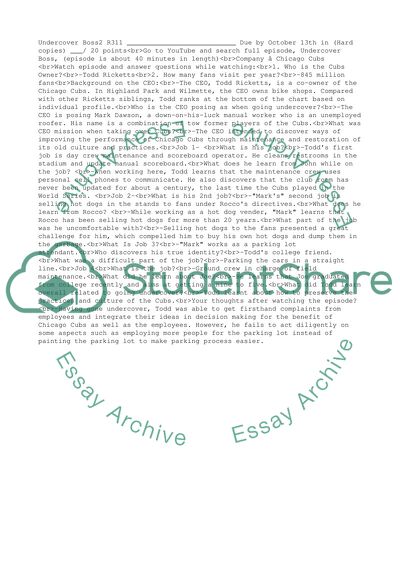 Undercover Boss2 R311 ___________________________ Due by October 13th in (Hard copies) ___/ 20 points
Go to YouTube and search full episode, Undercover Boss, (episode is about 40 minutes in length)
Company – Chicago Cubs
Watch episode and answer questions while watching:
1. Who is the Cubs Owner?
-Todd Ricketts
2. How many fans visit per year?
-845 million fans
Background on the CEO:
-The CEO, Todd Ricketts, is a co-owner of the Chicago Cubs. In Highland Park and Wilmette, the CEO owns bike shops. Compared with other Ricketts siblings, Todd ranks at the bottom of the chart based on individual profile.
Who is the CEO posing as when going undercover?
-The CEO is posing Mark Dawson, a down-on-his-luck manual worker who is an unemployed roofer. His name is a combination of tow former players of the Cubs.
What was CEO mission when taking over Cubs?
-The CEO intended to discover ways of improving the performance of Chicago Cubs through maintenance and restoration of its old culture and practices.
Job 1-
What is his job?
-Todd’s first job is day crew maintenance and scoreboard operator. He cleans restrooms in the stadium and update manual scoreboard.
What does he learn from John while on the job?
-When working here, Todd learns that the maintenance crew uses personal cell phones to communicate. He also discovers that the club room has never been updated for about a century, the last time the Cubs played in the World Series.
Job 2-
What is his 2nd job?
-“Mark’s” second job is selling hot dogs in the stands to fans under Rocco’s directives.
What does he learn from Rocco?
-While working as a hot dog vender, “Mark” learns that Rocco has been selling hot dogs for more than 20 years.
What part of the job was he uncomfortable with?
-Selling hot dogs to the fans presented a great challenge for him, which compelled him to buy his own hot dogs and dump them in the garbage.
What Is Job 3?
-“Mark” works as a parking lot attendant.
Who discovers his true identity?
-Todd’s college friend.
What was a difficult part of the job?
-Parking the cars in a straight line.
Job 4
What is the job?
-Ground crew in charge of field maintenance.
What did he learn about Joe?
-He learns that Joe graduated from college recently and aims at getting a nine to five.
What did Todd learn overall related to going undercover?
-Todd learnt about how to preserve the practices and culture of the Cubs.
Your thoughts after watching the episode?
-Having gone undercover, Todd was able to get firsthand complaints from employees and integrate their ideas in decision making for the benefit of Chicago Cubs as well as the employees. However, he fails to act diligently on some aspects such as employing more people for the parking lot instead of painting the parking lot to make parking process easier. Read More
Share:
Tags
Cite this document
(“Undercover Boss2 Assignment Example | Topics and Well Written Essays - 250 words”, n.d.)
Undercover Boss2 Assignment Example | Topics and Well Written Essays - 250 words. Retrieved from https://studentshare.org/management/1660388-undercover-boss2

CHECK THESE SAMPLES OF Undercover Boss2

...?Undercover Investigations Research a law enforcement topic of your choice. identify the strengths, threats and weakness and report on the opportunities, and determine whether it is effective in preventing crime. The Police departments and officers are continuously in danger of shoot outs, threats and revolting attitudes from the criminals and offenders of law. Police officers are assigned different tasks and the methods of each task differ greatly from one another. The use of undercover police activities forms one of the major techniques to combat criminals and corrupted people who are either too much involved in or aware of the Police activities that it becomes difficult to capture them. Uniformed...
4 Pages(1000 words)Term Paper

A Great Sense of Sentimental Graphs in a Film Warhorse

...Undercover Operations The main goal of investigation is to collect substantial evidence that will be used to identify and prosecute a criminal successfully. Without the collection of substantial evidence, law enforcement officers will always find themselves at the losing end in their efforts to curb crime and the society will continue to suffer. This noble aim has forced law enforcement officers to go an extra mile into using undercover work in order to collect the evidence they need. In this method, the undercover officers have to observe and even take part in illegal practices to protect their cover and thus collect evidence. They could play lovers, prostitutes, drug dealers or crime bosses. Undercover work has facilitated... the...
2 Pages(500 words)Essay

...Ethical boundaries of undercover policing and ized criminality As a covert police in a drug exposure picking some of these exercises’ would be ethical. Firstly, I would keep a fake identity to avoid compromise by the traffickers themselves. Also, engaging in the crimes is just able to increase the chances to get the evidence via opportunity provision for suspects to take on in purpose felony ( Kephart, 2007 ). However, I would consider these actions as unethical since it would appear ghoulish. Firstly, picking names of deceased persons to fake my identity as this would appear unoriginal putting me in a situation of concession once the fellow group discovers about it ( Sullivan, 2005 ) .Again, engaging in a situation...
1 Pages(250 words)Essay

...﻿Undercover Protocols ABSTRACT The assignment is based on providing instructions to two female undercover detectives while they prepare to infiltrate an organization, registered as The Ruckus Society, in order to investigate legitimacy of its operations. As a part of their job role, they are to maintain their undercover status, which arrives at a cost of conducting various misdemeanors and criminal activities. They should also restrain from directly intervening any knowledgeable crime, which can endanger their true identities. Furthermore, various criteria should be followed be them before getting completely involved in the real field of investigation, such as strong mental preparation,...
5 Pages(1250 words)Assignment

... Introduction The main purpose of this paper is to present a report regarding the job analysis and descriptions of the job positions in the company in which I hold the position of CEO. Moreover, this paper is describing the methods used and preferred for the analysis of the job positions in our business Moes Southwest Grill (Undercover Boss Official, 2013). Job Positions The two selected job positions from the episode “Undercover Boss US - S04E08 - Moes Southwest Grill” are, 1. Restaurant Supervisor, 2. Catering Director. Job Analyses “Restaurant Supervisor” For the Job Position of the Restaurant Supervisor, it should be acknowledged that the supervisor’s responsibility is to coordinate and supervise the workers. It is important... ...
3 Pages(750 words)Assignment

They Say / I Say Intro and assignment

... Legend The term “legend” is synonymous with “celebrity” or “fame” in many people’s minds. They see legends as having lived their lives in an exemplary and admirable way. The mere mention of the word legend makes people think of the many epic fighters, poets, playwrights and politicians about whom they have heard. However, legend does not always connote a celebrity, victorious or outstanding way of life. On the contrary, legend can also refer to a fake story that undercover law enforcement officers adopt in order to hide their identity. Undercover law enforcement officers adopt fake identities in order to mingle with criminals and gather intelligence information that can help expose their criminal activities. A financially stable... ...
1 Pages(250 words)Essay

...Criminal Justice Practitioners Question The biggest issue of concern revolves around applying techniques that justify the results. It is important for policy makers in the system to comprehend that circumstances of today are contemporary. Today, subversive dangers compared to the nineteenth century are more. However, it is important to understand that undercover police operations continue to remain standard features within the dynamic political topography. The operations take many forms and are essential to the community albeit with a few hitches. Actions by undercover agents in given examples are few of the bad elements within the system. Identified situations warranted the use of...
2 Pages(500 words)Assignment
sponsored ads
Save Your Time for More Important Things
Let us write or edit the assignment on your topic "Undercover Boss2" with a personal 20% discount.
GRAB THE BEST PAPER

Let us find you another Assignment on topic Undercover Boss2 for FREE!