Comments (0)
Add to wishlistDelete from wishlist
Cite this document
Summary
This ability has greatly influenced the success and failures of businesses and nations. The readings have provided a good learning experience in…
Download full paperFile format: .doc, available for editing
HIDE THIS PAPERGRAB THE BEST PAPER91.5% of users find it useful 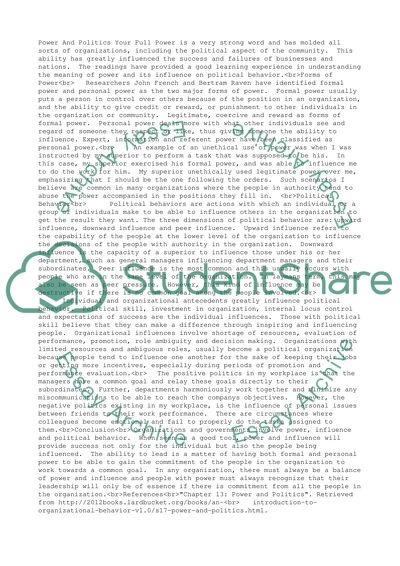 Power And Politics Your Full Power is a very strong word and has molded all sorts of organizations, including the political aspect of the community. This ability has greatly influenced the success and failures of businesses and nations. The readings have provided a good learning experience in understanding the meaning of power and its influence on political behavior.
Forms of Power
Researchers John French and Bertram Raven have identified formal power and personal power as the two major forms of power. Formal power usually puts a person in control over others because of the position in an organization, and the ability to give credit or reward, or punishment to other individuals in the organization or community. Legitimate, coercive and reward as forms of formal power. Personal power deals more with what other individuals see and regard of someone they respect or like, thus giving someone the ability to influence. Expert, information and referent power have been classified as personal power.
An example of an unethical use of power was when I was instructed by my superior to perform a task that was supposed to be his. In this case, my superior exercised his formal power, and was able to influence me to do the work for him. My superior unethically used legitimate power over me, emphasizing that I should be the one following the orders. Such scenarios I believe are common in many organizations where the people in authority tend to abuse the power accompanied in the positions they fill in.
Political Behavior
Political behaviors are actions with which an individual or a group of individuals make to be able to influence others in the organization to get the result they want. The three dimensions of political behavior are: upward influence, downward influence and peer influence. Upward influence refers to the capability of the people at the lower level of the organization to influence the decisions of the people with authority in the organization. Downward influence is the capacity of a superior to influence those under his or her department, such as general managers influencing department managers and their subordinates. Peer influence is the most common and this usually occurs with people who are in the same level of the organization. In laymans term, this may also be seen as peer pressure. However, this kind of influence may be destructive if there is no common goal among the people involved.
Individual and organizational antecedents greatly influence political behavior. Political skill, investment in organization, internal locus control and expectations of success are the individual influences. Those with political skill believe that they can make a difference through inspiring and influencing people. Organizational influences involve shortage of resources, evaluation of performance, promotion, role ambiguity and decision making. Organizations with limited resources and ambiguous roles, usually become a political organization because people tend to influence one another for the sake of keeping their jobs or getting more incentives, especially during periods of promotion and performance evaluation.
The positive politics in my workplace is that the managers have a common goal and relay these goals directly to their subordinates. Further, departments harmoniously work together and minimize any miscommunications to be able to reach the companys objectives. However, the negative politics existing in my workplace, is the influence of personal issues between friends to their work performance. There are circumstances where colleagues become emotional and fail to properly do the tasks assigned to them.
Conclusion
Organizations and governments involve power, influence and political behavior. When seen as a good tool, power and influence will provide success not only for the individual but also the people being influenced. The ability to lead is a matter of having both formal and personal power to be able to gain the commitment of the people in the organization to work towards a common goal. In any organization, there must always be a balance of power and influence and people with power must always recognize that their leadership will only be of essence if there is commitment from all the people in the organization.
References
"Chapter 13: Power and Politics". Retrieved from http://2012books.lardbucket.org/books/an-
introduction-to-organizational-behavior-v1.0/s17-power-and-politics.html. Read More
Share:
Tags
Cite this document
(“WEEK 4 DQ 7 Assignment Example | Topics and Well Written Essays - 250 words”, n.d.)
WEEK 4 DQ 7 Assignment Example | Topics and Well Written Essays - 250 words. Retrieved from https://studentshare.org/management/1654479-week-4-dq-7

CHECK THESE SAMPLES OF WEEK 4 DQ 7

...significance. C. What data source was used to collect samples The data was collected by means of observation of unleaded gasoline prices in local stations. Questionnaires were not used because key personal determining the factors affecting price changes in gasoline were not accessible. Other data was collected by use of interview with gas station personnel to gather their opinion concerning possible causes for changes in gasoline prices. QUESTION #7 A. What is Good Research Good research provides new and unbiased findings that are important to some entity or group of people. The researcher must not benefit from the outcomes and findings of the study as to ensure the integrity of the findings. Information collected...
2 Pages(500 words)Essay

... moral ethics. After all, so much effort had been put to learn the job and the people calling would not know my location. In case of a situation getting beyond my capacity to handle, then the instructor would advice on the way forward. 4. I accept the arrangement because it gives solutions to the main problem, lack of finance in the family. In as much as the solution goes against moral standards, my family would be saved from financial stress and I would get to go to the school of my desire, Ivy League School. Whatever decisions are made, Attfield argues that there would be costs and benefits. Work Cited Attfield, R. Making Decisions. 2001. Web. 30 November, 2011
1 Pages(250 words)Essay

...Security Analysis” Riskless Portfolio By 13 Apr Riskless Portfolio In finance risk is the basis for assessing and investing in securities. The short and long term securities both vary in their risk and return relationship that is based on many factors including the issuer of the security, maturity period, inflation scenario, industry performance etc. Generally government securities are considered to be risk free as the government is treated as the most reliable and definite source of paying back the investor. The difference between the bond and Treasury bill is the nature of their maturity but the issuer however is the same which is the government. ‘Risk free rate of interest is the rate of interest on a debt instrument... Analysis” Riskless ...
1 Pages(250 words)Essay

...During the contemporary period, it can be seen that change is inevitable in the healthcare system in order to develop the knowledge of the workers sothat they can keep pace with the changes they may encounter in their operations. In this scenario, it can be seen that nurses need to be cross-trained to work independently on another unit. Each nurse could choose the unit, to which she or he will be cross-trained, or every unit could "buddy" with another unit, and all staff from each unit would be cross-trained. There are different measures that can be taken by the nurse leader to implement the proposed change mentioned above. In order to successfully implement change in the unit, the leader needs to involve other members... the contemporary...
2 Pages(500 words)Research Paper

...Of the four situational leadership models, which do you tend to utilize most often? Explain. The leadership model I most utilize is high task/low relationship or coaching where task behavior is more than relationship behavior. (Hersey, P. & Blanchard, K., 2011) I say the most because in all aspects of my life where I am a leader I see myself showing others what to do. I am not comfortable with only giving orders. I have also tried collaborating with others, but in some cases too many minds often result in the work not getting done because a decision could not be made. As such, it has been suited me well to give directions and yet work with others on the task at the same time. Of the four key traits that the Traits Model... the four...
1 Pages(250 words)Essay

...Difficulties in communication exist regardless of the individual that is speaking or to whom they are speaking. As a function of such an understanding, it is necessary to understand that there is a distinction differential with regard to communicate persuasively; whether to a boss, a peer, or a subordinate. Whereas many individuals might indicate that there should be a great level of difference between the way that one communicates to a boss, to a peer, or to a subordinate, it will be the alternative approach of this particular analysis that the main difference is ultimately with regard to the level of deference that is paid to these individuals. Whereas it is true that the subordinate requires respect as a human being... in communication...
1 Pages(250 words)Assignment

...LISTENING SKILLS Listening Skills Listening is an act that shows an individual is actively involved in a conversation physically, emotionally and psychologically. An individual’s attitude towards the speaker and the message being delivered plays a greater role in listening. A positive attitude enhances listening while a negative one hinders it. People are, therefore, categorized as either good listeners or poor listeners. This paper explores the two types of listeners and how one can improve listening skills specifically in an organizations perspective. Good listening habits are evident when one lets mind and not emotions control him or her, nods appropriately, able to ask questions, show positive facial expressions and maintain... SKILLS...
1 Pages(250 words)Assignment

...Style of Leadership Style of Leadership Participative leadership style is the most effective to run an organization because the leader involves the entire team when there is a need for input, ideas and observations (Baack, 2012). Though the final decisions rest entirely on the participative leader, there is a high probability of the leader making the right decision. This is as a result of the involvement of the entire team who give not only a variety of new ideas, but also provide different methods of solving problems (Baack, 2012). Additionally, it is because all the team members approach the problem in unique ways due to the skills they possess. Thus, this gives more than one solution to a problem which can help solve a problem... of...
1 Pages(250 words)Assignment
sponsored ads
Save Your Time for More Important Things
Let us write or edit the assignment on your topic "WEEK 4 DQ 7" with a personal 20% discount.
GRAB THE BEST PAPER

Let us find you another Assignment on topic WEEK 4 DQ 7 for FREE!