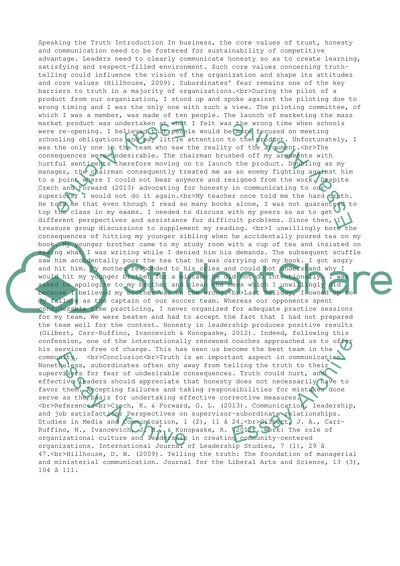 Extract of sample "Speaking the Truth"

Speaking the Truth Introduction In business, the core values of trust, honesty and communication need to be fostered for sustainability of competitive advantage. Leaders need to clearly communicate honesty so as to create learning, satisfying and respect-filled environment. Such core values concerning truth-telling could influence the vision of the organization and shape its attitudes and core values (Hillhouse, 2009). Subordinates’ fear remains one of the key barriers to truth in a majority of organizations.
During the pilot of a product from our organization, I stood up and spoke against the piloting due to wrong timing and I was the only one with such a view. The piloting committee, of which I was a member, was made of ten people. The launch of marketing the mass market product was undertaken at what I felt was the wrong time when schools were re-opening. I believed that people would be more focused on meeting schooling obligations and pay little attention to the product. Unfortunately, I was the only one in the team who saw the reality of the argument.
The consequences were undesirable. The chairman brushed off my arguments with hurtful sentiments therefore moving on to launch the product. Doubling as my manager, the chairman consequently treated me as an enemy fighting against him to a point where I could not bear anymore and resigned from the work. Despite Czech and Forward (2013) advocating for honesty in communicating to our superiors, I would not do it again.
My teacher once told me the hard truth. He told me that even though I read so many books alone, I was not guaranteed to top the class in my exams. I needed to discuss with my peers so as to get different perspectives and assistance for difficult problems. Since then, I treasure group discussions to supplement my reading.
I unwillingly bore the consequences of hitting my younger sibling when he accidentally poured tea on my book. My younger brother came to my study room with a cup of tea and insisted on seeing what I was writing while I denied him his demands. The subsequent scuffle saw him accidentally pour the tea that he was carrying on my book. I got angry and hit him. My mother responded to his cries and could not understand why I would hit my younger brother for a mistake he did not do intentionally. I was asked to apologize to my brother and clean the mess which I unwillingly did because I believed my brother was on the wrong.
Last holiday, I owned up to my failure as the captain of our soccer team. Whereas our opponents spent considerable time practicing, I never organized for adequate practice sessions for my team. We were beaten and had to accept the fact that I had not prepared the team well for the contest. Honesty in leadership produces positive results (Gilbert, Carr-Ruffino, Ivancevich & Konopaske, 2012). Indeed, following this confession, one of the internationally renowned coaches approached us to offer his services free of charge. This has seen us become the best team in the community.
Conclusion
Truth is an important aspect in communication. Nonetheless, subordinates often shy away from telling the truth to their supervisors for fear of undesirable consequences. Truth could hurt, and effective leaders should appreciate that honesty does not necessarily have to favor them. Accepting failures and taking responsibilities for mistakes done serve as the basis for undertaking effective corrective measures.
References
Czech, K. & Forward, G. L. (2013). Communication, leadership, and job satisfaction: Perspectives on supervisor-subordinate relationships. Studies in Media and Communication, 1 (2), 11 – 24.
Gilbert, J. A., Carr-Ruffino, N., Ivancevich, J. M., & Konopaske, R. (2012). Work: The role of organizational culture and leadership in creating community-centered organizations. International Journal of Leadership Studies, 7 (1), 29 – 47.
Hillhouse, D. W. (2009). Telling the truth: The foundation of managerial and ministerial communication. Journal for the Liberal Arts and Science, 13 (3), 104 – 111. Read More
Share:
Tags
Cite this document
(“Speaking the Truth Coursework Example | Topics and Well Written Essays - 500 words”, n.d.)
Speaking the Truth Coursework Example | Topics and Well Written Essays - 500 words. Retrieved from https://studentshare.org/management/1628039-speaking-the-truth

CHECK THESE SAMPLES OF Speaking the Truth

...?The Value of Finishing Education Introduction Statistics reveal that alarming numbers leave school for a variety of reasons. According to The Alliance for Excellent Education (2007), almost seven thousand students become dropouts each and every school day. Reflecting on the data, if students who dropped out of the class of 2007 had graduated, the nation’s economy would have benefited from an additional $329 billion in income over their lifetimes. Regrettably, the repercussions of the students’ dropping out are not recognized until it is just too late. The crucial message to emphasize actually is that it is never too late to finish what one has started; meaning, there is value in finishing one’s education. Why do students drop out...
5 Pages(1250 words)PowerPoint Presentation

...but encourages the ability to manipulate it for ones benefit. The extent of morality in terms of truth thus becomes debatable. Drawing the line on the level individual’s can not exceed when utilizing intellects, facts and other arguments that denote truth is transcendently difficult. Non- contradiction is the view that a preposition cannot be both true and false hence it is either true or false. From the above arguments, this fact can only apply, to some extent, on scientific facts or mathematical logic but not in real life. The affairs of human beings are as contradictory as the existence of heaven and hell (philosophically speaking) (Scheffler 61). Prior knowledge of...
5 Pages(1250 words)Essay

...provides the readers with several similar examples and allowing then to draw a general conclusion. Deductive logic on the other hand provides the readers with general propositions and then allowing the readers to draw a conclusion from a specific truth. The society has generally favored the use of inductive method of logical appeal following an already established truth as opposed to the deductive approach that allows for every individual to believe in their own opinion which may or may not be true. The influence of an operational print ad is distant from being extinct although there are more options available following technological advancements. It is clear that while conducting an inventory, the...
6 Pages(1500 words)Assignment

...Review of the play and how different speaker are treated differently According to Henry Higgins, criticizes those people who study and practice speaking other foreign language other than their tradition language as cultural traitors. The quotation, “you are speaking the oppressor’s language by speaking English, you’re running the Spanish languages” thisverdict clearly shows every person is treated differently according to the language he or she speaks by criticizing the practice and act of speaking a foreign language. English language is viewed as the simplest subject which is based on experience and personal judgment. Perhaps, according to the character...
3 Pages(750 words)Essay

...Truth 'I am the Way, the Truth and the Life may be the standard answer one may expect from a priest when asked to define truth. Indeed, they may even go on to add that Jesus was truth personified and so we had the embodiment of truth walking on earth some 2,000 years ago requiring no definition or explanation. The matter though is older than 2,000 years and even though philosophers have been struggling with the meaning of truth since before Christ the word requires elucidation. The exposition of truth therefore may be as varied as our perception of it, owed in no small measure to our culture, background and...
2 Pages(500 words)Essay

...Ethics- "truth and truth telling" In this chapter the gives importance to telling truth. Telling truth is tried to inculcate into each one of us even as a child. In the health care sector especially in the nursing profession the author emphases that truth plays a major part as it forms the trust that bonds the patient with the treatment. Trust plays a major role in patients' life as it is the only way that patient will be able to cooperate with the medical staff to perform treatment. For instance, the patient should be able to trust in the capability of the nurses that the medicines that are administered on them are correct. Trust is a mutual aspect. In...
2 Pages(500 words)Essay

...Ethics and Values Ethics and Values Why Courage Matters Question One McCain means that, among all the human qualities, courage isthe first because it guarantees all the others. Without the courage to hold our convictions, and not only when they are in accordance with the convictions of others, they become vain and superficial, adding no value to self or societal respect for the values one professes. Without courage, people become corruptible even if they detest corruption. Question Two Moral courage may be displayed by speaking the truth even when it might cause one trouble. For example, a truth could cost someone a job or land him in a fight with possible consequences of bodily harm. To...
2 Pages(500 words)Essay

...Public Speaking I have both strengths and weaknesses as a public speaker. One of my strengths that I want to expand is confidence and self-awareness. I always understand myself, what I need and what I should say at any given time. I need to expand my confidence so that I can be able to face my audience and confront any issue arising that may challenge my public speech. Secondly, I am flexible so that I can detect and adapt to the changing moods of my audience. Whenever I notice that my audience is not satisfied I change my approach and include more captivating stories to excite my audience and bring them back to enjoy my speech. The third strength that I possess is coherency and fluency in speech. This makes me to present...
1 Pages(250 words)Assignment

...Problems of Public Speaking. The Feedback. I consider that constructive feedback is the most effectivetype of feedback. In the video clip R.S.V.P. Clueless we can see the main character’s (Cher) makes an effort to provide the answer to the question “Should all the oppressed people be allowed refuge in America?” Cher pointed out that there is a strain on the resources and used a metaphor of her father’s birthday which should be the R.S.V.P. party, but it appeared that more people came and she had to rearrange the details and the same amount of food was served for bigger number of guests. She pointed that the government could do something of the kind to accept all the oppressed people. The auditorium applauded when she finished... but they...
1 Pages(250 words)Assignment

...lying (Shafer-Landau 2012). Ethics and morality are components of virtue theory like honesty and generous. Virtue ethics focuses on the natural character of an individual rather than on the nature or consequences of specific actions executed. Deontological ethics refers to the ordinary ethical point that controls the morality of an action, based on the action’s devotion to set rules. Personal Experience An instance involving my friend who faces a circumstance demanding him to speak the truth. Deontology advocates truth speaking which is an ethical and moral act. Speaking the truth in itself is a virtue and by this virtue, theories support it. Reference Shafer-Landau, R. (2012). Ethical Theory: An Anthology. Hoboken: John Wiley & amp;...
1 Pages(250 words)Essay
sponsored ads
Save Your Time for More Important Things
Let us write or edit the coursework on your topic "Speaking the Truth" with a personal 20% discount.
GRAB THE BEST PAPER

Let us find you another Coursework on topic Speaking the Truth for FREE!