Comments (0)
Add to wishlistDelete from wishlist
Cite this document
Summary
I am pro-choice and sincerely feel that abortion is a suitable and legitimate healthcare option which all women should be allowed to access safely without stigma or shame. Women should not be coerced to observe the opinions of others or make decisions based on them. There is no…
Download full paperFile format: .doc, available for editing
HIDE THIS PAPERGRAB THE BEST PAPER93% of users find it useful 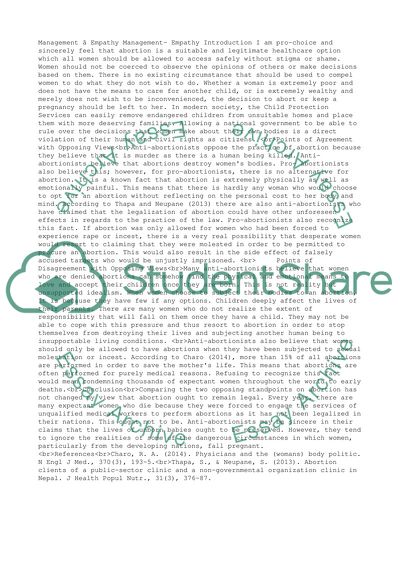 Management – Empathy Management- Empathy Introduction I am pro-choice and sincerely feel that abortion is a suitable and legitimate healthcare option which all women should be allowed to access safely without stigma or shame. Women should not be coerced to observe the opinions of others or make decisions based on them. There is no existing circumstance that should be used to compel women to do what they do not wish to do. Whether a woman is extremely poor and does not have the means to care for another child, or is extremely wealthy and merely does not wish to be inconvenienced, the decision to abort or keep a pregnancy should be left to her. In modern society, the Child Protection Services can easily remove endangered children from unsuitable homes and place them with more deserving families. Allowing a national government to be able to rule over the decisions that women make about their own bodies is a direct violation of their human and civil rights as citizens.
Points of Agreement with Opposing Views
Anti-abortionists oppose the practice of abortion because they believe that it is murder as there is a human being killed. Anti-abortionists believe that abortions destroy women’s bodies. Pro- abortionists also believe this; however, for pro-abortionists, there is no alternative for abortion. It is a known fact that abortion is extremely physically as well as emotionally painful. This means that there is hardly any woman who would choose to opt for an abortion without reflecting on the personal cost to her body and mind. According to Thapa and Neupane (2013) there are also anti-abortionists who have claimed that the legalization of abortion could have other unforeseen effects in regards to the practice of the law. Pro-abortionists also recognize this fact. If abortion was only allowed for women who had been forced to experience rape or incest, there is a very real possibility that desperate women would resort to claiming that they were molested in order to be permitted to procure an abortion. This would also result in the side effect of falsely accused targets who would be unjustly imprisoned.
Points of Disagreement with Opposing Views
Many anti-abortionists believe that women who are denied abortions can somehow find the physical and emotional means to love and accept their children once they are born. This is not reality but unsupported idealism. When women choose to subject their bodies to an abortion, it is because they have few if any options. Children deeply affect the lives of their parents. There are many women who do not realize the extent of responsibility that will fall on them once they have a child. They may not be able to cope with this pressure and thus resort to abortion in order to stop themselves from destroying their lives and subjecting another human being to insupportable living conditions.
Anti-abortionists also believe that women should only be allowed to have abortions when they have been subjected to sexual molestation or incest. According to Charo (2014), more than 15% of all abortions are performed in order to save the mother’s life. This means that abortions are often performed for purely medical reasons. Refusing to recognize this fact would mean condemning thousands of expectant women throughout the world to early deaths.
Conclusion
Comparing the two opposing standpoints on abortion has not changed my view that abortion ought to remain legal. Every year, there are many expectant women who die because they were forced to engage the services of unqualified medical workers to perform abortions as it has not been legalized in their nations. This ought not to be. Anti-abortionists may be sincere in their claims that the lives of unborn babies ought to be preserved. However, they tend to ignore the realities of some of the dangerous circumstances in which women, particularly from the developing nations, fall pregnant.
References
Charo, R. A. (2014). Physicians and the (womans) body politic. N Engl J Med., 370(3), 193-5.
Thapa, S., & Neupane, S. (2013). Abortion clients of a public-sector clinic and a non-governmental organization clinic in Nepal. J Health Popul Nutr., 31(3), 376-87. Read More
Share:
Tags
Cite this document
(“Empathy Assignment Example | Topics and Well Written Essays - 500 words”, n.d.)
Empathy Assignment Example | Topics and Well Written Essays - 500 words. Retrieved from https://studentshare.org/management/1627739-empathy

CHECK THESE SAMPLES OF Empathy

Empathy: Another point of view

...?Empathy: Another Point of View “We must be effective members of the Joint team. We need to think of our Army as an expeditionary force. We need to encourage innovation and increase resiliency” (Army FM 6-22). This quotation is indeed the foundation of the deeper significance of being and belonging into an Army. As a team, you don’t work individually but as a group geared towards one goal and working within the realms of one mission. When counseling subordinates Army leaders must make sure that the following actions are to be taken into consideration. Aside from explaining the reason for the counseling and how the subordinate failed to meet standards, the Army leader must also take active listening to the side of the subordinated... ....
3 Pages(750 words)Essay

The Visible Empathy of Infants and Toddlers

...? "The Visible Empathy of Infants and Toddlers" attempts to prove that infants and toddlers show empathy through an observational study. This study takes place in a lab school in a university setting. The lab school had an ethnically diverse population of students, three months to six years of age. The authors define empathy at the infant and toddler age as "the capacity to observe the feelings of another and to respond with care and concern for that other." In the study, the method used to record information is called pedagogical documentation. This method uses photographs of children, samples of their work, recorded children's conversations and the recorded thoughts of their teachers to...
1 Pages(250 words)Essay

Empathy and Moral Deficiency in Psychopaths

...? Empathy and Moral Deficiency in Psychopaths Introduction This paper is an analytical discussion on psychopathy, drawn from five recent studies on this field of abnormal psychology. As an overview, the studies in this field are so many and varied given the years in which abnormal psychology has been the object of theory and practice in the science of psychology. This paper has therefore focused on recent studies that may draw light on the limited issue of the correlation between psychopathy and human knowing-and-feeling. In the five studies selected by this paper, human knowing-and-feeling are more technically identified as cognitive and emotional or affective empathy. In general, the focus of discussion...
11 Pages(2750 words)Research Paper

...Mirror Neurons and Empathy   One went to a McDonald’s store near a school at around five in the afternoon. One decided to sit at the back of a couple, a boy and a girl. The boy seems to be courting the girl. They were college students who one thinks just came from school and were on a date. One decided to observe this couple because they were oblivious to the crowd inside the restaurant. One thought it would be interesting to mimic how the girl was reacting towards the actuations of the boy. One observed the girl seems so conscious while the boy was looking at her directly in the eye. Her head was usually bowed down towards her food. She would often touch her hair and put it at the back of her ear. She would reply...
2 Pages(500 words)Essay

...Essay, English Literature ic and Modern) Topic: The deep empathy project-- Chang Rae Lees Novel, A Gesture Life-- an imaginary conversation between yourself and that author. That was a chance meeting with Chang-rae Lee at the Amsterdam Airport. I was on way to Houston to be with my son for a short holiday and I saw Chang-lee in the Traveler’s Lounge, all alone engrossed in reading a book. The break in journey was for about two hours, and he too was going to Houston to attend a seminar on “Cross-Cultural Issues with Authors who were not Native-Americans.” At my request he was most willing to accede to my request to discuss about his novel, “A Gesture Life.” “Let me be frank, I am neither a fan of your book, nor...
3 Pages(750 words)Essay

...﻿Empathy in Life I believe in empathy. I believe that showing empathy to others can bring happiness and restore peace in this broken world. I was brought up in a Christian family where my parents ensured that we said the grace before every meal and it was mandatory to attend church service every Sunday. My parents had adopted my grandparents’ culture since they were also devoted Christians. Every time we visited our grandparents for a family gathering, they used to emphasize on compassion and empathy. They said that God was working in every individual who showed love and empathy towards others. My parents used to echo the same sentiments whenever we were...
3 Pages(750 words)Essay

...Empathy On a Saturday afternoon, I went to visit a colleague in the nearby grocery store where she has been working for almost a year now. Back then, my friend had a serious problem about her husband who was at that time having an extra marital affair. At first, I had no clue on what is going on until she started asking awkward questions such as “Would you personally consider yourself having a relationship with a married man and has a child?” Even though I find her question a bit offending, I still managed to give her a more positive outlook in life. In the process of feeling and understanding what she was feeling, it was so much easier for me to help her go through the emotional and psychological pain she was at that...
2 Pages(500 words)Essay

State of Mind and Empathy

...Module of Mind and Empathy Cognitive process such as thinking, perception, decision-making, problem-solving and judgment all happen in the brain and the state of mind of a person at that time significantly influences their outcome. Feelings expressed as empathy are controlled by the brain within the Central Nervous System (Coplan and Goldie, 177-8). Empathy is the ability to feel as another person by psychologically entering into their situations. In order to determine if empathy is a natural reflex or not and if it can be acquired, a simple experimental exercise has been done to explore the relationship between the state of mind and empathy. One...
2 Pages(500 words)Essay

...unit Supervisor’s 20 January Understanding empathy Empathy is the capa to understand and be part of another person’s emotions. I have learnt, from the course materials, that empathy is an involuntary process that concordance mediates. When concordance exist between the person and another who is experiencing a situation, the observer is likely to empathize than if concordance does not exist. I learnt from activity one that by feeling an object, I can easily identify it is the object is common to my routine applications. I also learnt, from activity two, that with focus on a person, peer is likely to emulate the person’s actions such as taking food from a plate into the mouth or playing...
1 Pages(250 words)Essay
sponsored ads
Save Your Time for More Important Things
Let us write or edit the assignment on your topic "Empathy" with a personal 20% discount.
GRAB THE BEST PAPER

Let us find you another Assignment on topic Empathy for FREE!