Comments (0)
Add to wishlistDelete from wishlist
Cite this document
Summary
This paper "Management and Operations - the Housing Policy" is designed to help students conceptualize the essential elements of their capstone project. Completing this sheet and then discussing it with the instructor will ensure that the project will proceed smoothly. …
Download full paperFile format: .doc, available for editing
HIDE THIS PAPERGRAB THE BEST PAPER94.6% of users find it useful 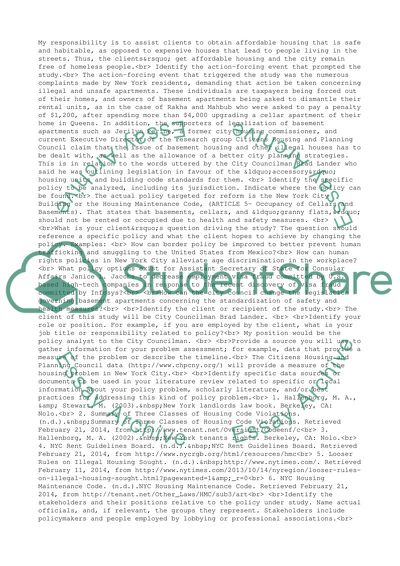 Extract of sample "Management and Operations - the Housing Policy"

My responsibility is to assist clients to obtain affordable housing that is safe and habitable, as opposed to expensive houses that lead to people living in the streets. Thus, the clients’ get affordable housing and the city remain free of homeless people.
Identify the action-forcing event that prompted the study.
The action-forcing event that triggered the study was the numerous complaints made by New York residents, demanding that action be taken concerning illegal and unsafe apartments. These individuals are taxpayers being forced out of their homes, and owners of basement apartments being asked to dismantle their rental units, as in the case of Rakha and Mahbub who were asked to pay a penalty of $1,200, after spending more than $4,000 upgrading a cellar apartment of their home in Queens. In addition, the supporters of legalization of basement apartments such as Jerilyn Perine, a former city housing commissioner, and current Executive Director of the research group Citizens Housing and Planning Council claim that the issue of basement housing and other illegal houses has to be dealt with, as well as the allowance of a better city planning strategies. This is in relation to the words uttered by the City Councilman Brad Lander who said he was outlining legislation in favour of the “accessory” housing units and building code standards for them.
Identify the specific policy to be analyzed, including its jurisdiction. Indicate where the policy can be found.
The actual policy targeted for reform is the New York City Building or the Housing Maintenance Code, (ARTICLE 5- Occupancy of Cellars and Basements). That states that basements, cellars, and “granny flats,” should not be rented or occupied due to health and safety measures.

What is your client’s question driving the study? The question should reference a specific policy and what the client hopes to achieve by changing the policy. Examples:
How can border policy be improved to better prevent human trafficking and smuggling to the United States from Mexico?
How can human rights policies in New York City alleviate age discrimination in the workplace?
What policy options exist for Assistant Secretary of State for Consular Affairs Janice L. Jacobs to decrease employment visa fraud committed by U.S. based high-tech companies in response to the recent discovery of visa fraud committed by Infosys?

How can the city council change the legislation governing basement apartments concerning the standardization of safety and health measures?

Identify the client or recipient of the study.
The client of this study will be City Councilman Brad Lander.

Identify your role or position. For example, if you are employed by the client, what is your job title or responsibility related to policy?
My position would be the policy analyst to the City Councilman.

Identify at least three potential policy options. Make sure that these involve changes to the policy identified above.
1. Asthma free housing policy. This will ensure the eradication of poor housing conditions such as mould, mice and cockroach, thus making basement apartments healthy to live in and enabling the legalization of basements, cellars, and other illegal housing units.
2. Issuing of the rental permit policy. This will ensure that the city council inspects basements on health and safety measures and give their authorization before they are converted to basement apartments and rented out.
3. Yearly remodelling and maintenance policy. This policy will ensure that basement apartment and other currently illegal housing are maintained to standard safety and health requirements.
Read More
Share:
Tags
Cite this document
(Management and Operations - the Housing Policy Assignment, n.d.)
Management and Operations - the Housing Policy Assignment. Retrieved from https://studentshare.org/management/1626926-client-and-policy-failure

CHECK THESE SAMPLES OF Management and Operations - the Housing Policy

...? Housing Finance and Economics – Evaluating New Labour’s Housing Policy (2702 words) The idea behind social housing refers to a system of housing which is affordable. This permits people to on low rents and with security. The system is need based where the claimant earns points as per needs. These accommodations are provided by the non profit organizations or housing associations. (Shelter, 2011) Hence the main purpose of providing social housing is to provide houses which are within the range of affordability for the individuals with low income levels. This segment is monitored such that rents are kept at low levels. This sector is different from that of private landlords where the choice of the later dominates. Here, houses... are...
11 Pages(2750 words)Coursework

...adapted from the successful Dutch model 'Delft'. The Government's policy emphasised four objectives - offering choice, tackling social exclusion, helping to create sustainable communities, and encouraging the effective use and management of social housing. choice-based lettings in the UK was emphasised by the English Housing Green Paper of 2000.Across nations the evidences showed that migrants and minorities experienced poor housing conditions, homelessness and relative deprivation.The situation projected wide social and economic gaps. The minorities, immigrants and blacks were living in isolated neighbourhood and settlements with poor infrastructures...
6 Pages(1500 words)Essay

.... The new government also introduced a kind of halfway policy in which new "Social Landlords", which would be based upon housing associations, would be set up to manage properties, taking them out of council control. While rents may rise and the tenants have less rights (although more than purely private housing) most estates that had been asked to vote on the matter have overwhelmingly voted for them. When they have not it seem as if the specific conditions of the present council estate favor continued council management: PLACE # HOMES TURNOUT% FOR % AGAINST % Tameside 17,000 69 63 27 Liverpool 4,300 78 85 15 Tower...
22 Pages(5500 words)Essay

...on the supply of affordable housing for rent in many UK regions, "where the provision of new affordable homes has failed to keep pace with the numbers being lost through sales" (Shelter, 2005). The new problem has arisen: in 2002 Britain saw the lowest number of new houses built(measured in starts) since the end of World War II (Cameron, 2003). The housing supply was short, but moreover it mismatched the demand in the cities and regions. Thus, along with the stimulation of private housing governmental policies have created several obstacles on the development of UK housing market. Economic Factors Economical factors that lead to the...
6 Pages(1500 words)Case Study

...Housing Policy Table of Contents Introduction 3 The Effect of the Global Crisis 4 Recent Global Financial Crisis and the Housing Problems 5 The Implications for Housing Policy 9 Conclusion 17 References 18 Bibliography 20 Introduction The global financial crisis, that hit the word economy hard, actually started to demonstrate its consequence in the middle of 2007 and continued till late of 2008. The significant outcome of this crisis was the drop in the global stock market indices. A large number of financial institutions have warped or been bought out and government administration in the rich nations had to approach with release packages to bail out...
11 Pages(2750 words)Essay

...Linnet Madamombe Module CIH L4: Housing Policy 13/12/13 Introduction This piece of writing gives an elaboration of the issues that underlie the housing problem in the United Kingdom. It highlights the program that was formulated to resolve the housing program as well as giving the challenges that have confronted the implementation of the contact housing policy too. Homelessness is an issue that has greatly affected people of the United Kingdom. This was caused by a number of issues such as high cost of house prices, structural factors of designs and excreta. (Harding, 2004) As result, the government was endeared to...
2 Pages(500 words)Essay

...Housing Policy in Seoul HOUSING POLICY IN SEOUL Introduction The process of urbanization in Seoul, South Korea, has been intense over the past thirty years, as has the capabilities of urban administration to manage this process. Seoul, over the course of the 20th century, has grown into one of the largest cities in the world with the most condensed and rapid transformation witnessed in the world (Yoonseuk, 2012). From a population of just 900,000 people after the Second World War, the city in 1998 reached a population of 10 million before slightly falling to its present population of 9.82 million. Moreover, the city has also experienced extensive sprawl and suburbanization, growing into a metropolis of twenty million citizens... in...
10 Pages(2500 words)Research Paper

...). The annual housing completions that took place between 2002 and 2011’s first quarter are provided in the figure below according to geographical distribution. Figure 1 - Annual Housing Completions (2002 to 1st Quarter 2011) (Source ONS) Overall the planning system has been severely criticized on quite a few fronts because of its inability to deliver on the issue of house building to fulfil the exact needs of the local populations. 2. Criticism of the Planning System A critical appraisal of the planning system’s weaknesses must be undertaken to see how the new localism policy aims to solve these very problems. The planning policy has largely been...
12 Pages(3000 words)Research Paper
sponsored ads
Save Your Time for More Important Things
Let us write or edit the assignment on your topic "Management and Operations - the Housing Policy" with a personal 20% discount.
GRAB THE BEST PAPER

Let us find you another Assignment on topic Management and Operations - the Housing Policy for FREE!