Comments (0)
Add to wishlistDelete from wishlist
Cite this document
Summary
This research is being carried out to evaluate and present the evolution and revolution of an organization that has been used to determine the growth of organizations. In layman’s language, evolution is used to refer to the prolonged trading periods of the organization…
Download full paperFile format: .doc, available for editing
HIDE THIS PAPERGRAB THE BEST PAPER98.9% of users find it useful 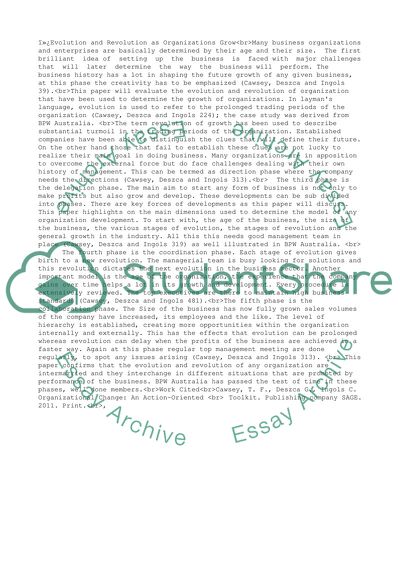 Extract of sample "Evolution and Revolution as Organizations Grow"

﻿Evolution and Revolution as Organizations Grow
Many business organizations and enterprises are basically determined by their age and their size. The first brilliant idea of setting up the business is faced with major challenges that will later determine the way the business will perform. The business history has a lot in shaping the future growth of any given business, at this phase the creativity has to be emphasized (Cawsey, Deszca and Ingols 39).
This paper will evaluate the evolution and revolution of organization that have been used to determine the growth of organizations. In layman’s language, evolution is used to refer to the prolonged trading periods of the organization (Cawsey, Deszca and Ingols 224); the case study was derived from BPW Australia.
The term revolution of growth has been used to describe substantial turmoil in the trading periods of the organization. Established companies have been able to distinguish the clues that will define their future. On the other hand those that fail to establish these clues are not lucky to realize their main goal in doing business. Many organizations are in apposition to overcome the external force but do face challenges dealing with their own history of management. This can be termed as direction phase where the company needs the directions (Cawsey, Deszca and Ingols 313).
The third phase is the delegation phase. The main aim to start any form of business is not only to make profits but also grow and develop. These developments can be sub divided into phases. There are key forces of developments as this paper will discuss. This paper highlights on the main dimensions used to determine the model of any organization development. To start with, the age of the business, the size of the business, the various stages of evolution, the stages of revolution and the general growth in the industry. All this this needs good management team in place (Cawsey, Deszca and Ingols 319) as well illustrated in BPW Australia.
The fourth phase is the coordination phase. Each stage of evolution gives birth to a new revolution. The managerial team is busy looking for solutions and this revolution dictates the next evolution in the business sector. Another important model is the age of the organization, the experience that the company gains over time helps a lot in its growth and development. Every procedure is extensively reviewed. The top executives are there to maintain high business standards (Cawsey, Deszca and Ingols 481).
The fifth phase is the collaboration phase. The Size of the business has now fully grown sales volumes of the company have increased, its employees and the like. The level of hierarchy is established, creating more opportunities within the organization internally and externally. This has the effects that evolution can be prolonged whereas revolution can delay when the profits of the business are achieved in a faster way. Again at this phase regular top management meeting are done regularly, to spot any issues arising (Cawsey, Deszca and Ingols 313).
This paper confirms that the evolution and revolution of any organization are intermarried and they interchange in different situations that are promoted by performance of the business. BPW Australia has passed the test of time in these phases, well done members.
Work Cited
Cawsey, T. F., Deszca G., Ingols C. Organizational Change: An Action-Oriented
Toolkit. Publishing company SAGE. 2011. Print.
, Read More
Share:
Tags
Cite this document
(“Evolution and Revolution as Organizations Grow Assignment”, n.d.)
Evolution and Revolution as Organizations Grow Assignment. Retrieved from https://studentshare.org/management/1619522-stages-of-growth-diagnostic-framework-rubric

“Evolution and Revolution As Organizations Grow Assignment”, n.d. https://studentshare.org/management/1619522-stages-of-growth-diagnostic-framework-rubric.
Comments (0)
Click to create a comment or rate a document

CHECK THESE SAMPLES OF Evolution and Revolution as Organizations Grow

...English March 10, Topic: argumentative essay--Think and Grow Rich - Napoleon Hill Argue either for or against Hill’s quote “An educated man is not necessarily, one who has an abundance of general or specialized knowledge. An educated man is one who has so developed the faculties of his mind that he may acquire anything he wants, or its equivalent, without violating the rights of others." Two types of individuals are there in this world. One says, ‘whatever I say is correct.’ The second type is the one who says, ‘whatever correct is there in the world belongs to me.’ Both are educated but their approach to life differs much. The former is egoistic and stops; the other one is willing to learn and moves forward. Napoleon...
4 Pages(1000 words)Essay

Why do Economies Grow

...?Why do Economies Grow? Economies grow as a result of the increase in Gross Domestic Product (GDP) of a country which is an outcome of the increase in labor as well as capital. These were the fundamental economic indicators that influence the economic growth of a country, as per the mathematical model developed by the MIT economist Robert Solow (Hardesty, 2011). Here, the capital essentially includes all production tools. More work was done by other researchers after Solow to expand his mathematical model, as a result of which, certain other factors were also found to be the driving factors of a nation’s economy. Such factors include but are not limited to human capital and land. The validity of information generated by Solow can... be...
2 Pages(500 words)Essay

Evolution of the construction industry since the industrial revolution

...Evolution of the construction industry since the industrial revolution Brick is the oldest man-made building material invented almost ten thousand years ago. Its simplicity, strength, and durability led to its extensive use and gave it a prominent place. With the Industrial Revolution, emphasis shifted to iron, steel and concrete construction. By the early twentieth century, the demand was for high-rise construction, and the technology of stone and masonry buildings had not kept pace with the developments of other structural systems1. Design of masonry was at that time purely empirical rather than rationally determined, and rapid advances in the concrete engineering quickly outpaced what was seen as an outmoded, inefficient... , and...
5 Pages(1250 words)Essay

...emerging with each passing day, a key question arises that if IT was one of the foundations of an organization, then what would constitute an ideal data center over the next 5-10 years with a view to the increasing demands from the industry and the market. The pace and sequence of the expected evolution to such a data infrastructure also generates an interest apart from raising several questions regarding the optimal specifics of such systems. Literature review Organizations have transformed rapidly over the past 5 decades. From using paper and telephones for conducting daily business operations, the industry regardless of the sector of operation has moved forward to relying on storing...
4 Pages(1000 words)Research Proposal

Evolution or Revolution / Realist or Idealist

...An Ideal Political and Economic World Scenario.  Current Political and Economical World Scenario:       Democracy preferred over other Political theory/ Philosophy:      Democracy can be referred as a system of governance, where people supposedly have a say in every state of affairs. Under democracy, the government is said to be for the people, of the people and by the people. Equality and Freedom are considered as the two pillars of democracy. Democratic states are widely classified into two types. One is Direct Democracy, where people are empowered to govern by themselves. Another is Indirect Democracy, where people elect their representatives, empowered by the people to govern. (Christiano 2002, Estlund, 2002) Socialism... Ideal Political...
2 Pages(500 words)Essay

.../ Emma Hartnell- Baker is not new in the field of child care and development. She is Bed Hons. MA. Cert Life Coaching. Moreover, she is also director of Read Australia organization which is an institution working for good parenting. ‘The Child Listener’ is also a productive contribution of Emma Hartnell. This website offers warm welcome to various psychological solutions. Sufferers of various psychological problems can get good solutions here. They can also discuss their training needs. 3. Family Matters Parenting Magazine. Emotional Intelligence- Tips for Facilitating Emotional Intelligence in Kids. Retrieved May 27, 2010, from http://www.parenting-child-development.com/emotional-intelligence.html Security and physical...
4 Pages(1000 words)Essay

...Evolution and Revolution Introduction In the Rebel without a Cause, Dean personifies the 1950s conflict that occurred among American youth and their parents. In 1955 social drama the Rebel without a cause is a powerful film with portrayal of the majority of genres. As directed by Nicholas Ray, it offered both commentary and social approach. It talks a story of a teenager called Dean, who moved to Los Angeles with her parents and enrolled in Dawson high school. He was loitering in the streets and got arrested and taken to police custody. It is at the police station where battle ensued with his parents (Ebert 7). Marlon Brancho is an American screen and stage actor of the film the wild ones. He brought...
5 Pages(1250 words)Essay

...of organisms to aspects such as migration and occurrences, for example, continental drift among others. Accordingly, the chapter supports its assertion with various examples such as the marsupial mammal concentration in South America and Australia. Also, fossils of marsupials have previously been established in America. The argument here is that Australia and South America were initially joined by a continental land bridge, now Antarctica. It follows, therefore, that for evolution to be factual there should be indication for marsupial relocation from America through Antarctica to Australia. Studies have suggested that indeed there is evidence of such a migration and thus validates the claim. The...
10 Pages(2500 words)Term Paper
sponsored ads
Save Your Time for More Important Things
Let us write or edit the assignment on your topic "Evolution and Revolution as Organizations Grow" with a personal 20% discount.
GRAB THE BEST PAPER

Let us find you another Assignment on topic Evolution and Revolution as Organizations Grow for FREE!