Comments (0)
Add to wishlistDelete from wishlist
Cite this document
Summary
Sandra Tang has handled the situation very well and keeping the organization’s objective and professionalism ahead of everything she believes in the fact that the personal orientations should not be brought in to the action which may impact the organizational…
Download full paperFile format: .doc, available for editing
HIDE THIS PAPERGRAB THE BEST PAPER92.8% of users find it useful 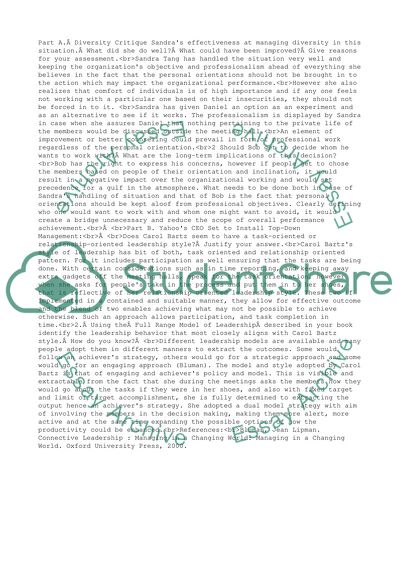 Extract of sample "Diversity and Leadership"

Part A. Diversity Critique Sandra’s effectiveness at managing diversity in this situation. What did she do well? What could have been improved? Give reasons for your assessment.
Sandra Tang has handled the situation very well and keeping the organization’s objective and professionalism ahead of everything she believes in the fact that the personal orientations should not be brought in to the action which may impact the organizational performance.
However she also realizes that comfort of individuals is of high importance and if any one feels not working with a particular one based on their insecurities, they should not be forced in to it.
Sandra has given Daniel an option as an experiment and as an alternative to see if it works. The professionalism is displayed by Sandra in case when she assures Daniel that nothing pertaining to the private life of the members would be discussed outside the meeting hall.
An element of improvement or better counseling could prevail in form of professional work regardless of the personal orientation.
2 Should Bob get to decide whom he wants to work with? What are the long-term implications of this decision?
Bob has the right to express his concerns, however if people get to chose the members based on people of their orientation and inclination, it would result in a negative impact over the organizational working and would set precedence for a gulf in the atmosphere. What needs to be done both in case of Sandra’s handling of situation and that of Bob is the fact that personal orientations should be kept aloof from professional objectives. Clearly defining who one would want to work with and whom one might want to avoid, it would create a bridge unnecessary and reduce the scope of overall performance achievement.

Does Carol Bartz seem to have a task-oriented or relationship-oriented leadership style? Justify your answer.
Carol Bartz’s style of leadership has bit of both, task oriented and relationship oriented pattern. For it includes participation as well ensuring that the tasks are being done. With certain considerations such as in time reporting, and keeping away extra gadgets off the meeting halls, speak for the task orientation, however when she asks for people’s take in the process and put them in to her shoes, that is reflective of her relationship oriented leadership style. These two if implemented in a contained and suitable manner, they allow for effective outcome and the blend of two enables achieving what may not be possible to achieve otherwise. Such an approach allows participation, and task completion in time.
2. Using the Full Range Model of Leadership described in your book identify the leadership behavior that most closely aligns with Carol Bartz style. How do you know?
Different leadership models are available and many people adopt them in different manners to extract the outcomes. Some would follow an achiever’s strategy, others would go for a strategic approach and some would go for an engaging approach (Bluman). The model and style adopted by Carol Bartz is that of engaging and achiever’s policy and model. This is visible and extractable from the fact that she during the meetings asks the members how they would go about the tasks if they were in her shoes, and also with fixed target and limit of target accomplishment, she is fully determined to extracting the output hence an achiever’s strategy. She adopted a dual model strategy with aim of involving the members in the decision making, making them more alert, more active and at the same time expanding the possible options of how the productivity could be enhanced.
References:
Bluman, Jean Lipman. Connective Leadership : Managing in a Changing World: Managing in a Changing World. Oxford University Press, 2000. Read More
Share:
Tags
Cite this document
(“Diversity and Leadership Assignment Example | Topics and Well Written Essays - 500 words”, n.d.)
Diversity and Leadership Assignment Example | Topics and Well Written Essays - 500 words. Retrieved from https://studentshare.org/management/1618465-diversity-and-leadership

CHECK THESE SAMPLES OF Diversity and Leadership

...?Leadership Issues – Managing Diversity Introduction The force of globalization has effectively altered the way businesses are done. This was furthered fuelled by dramatic improvements in technology which greatly enhanced communications capabilities that has effectively brought countries and cultures closer to each other. Also, the seemingly unstoppable trend of globalization has effectively brought western and eastern economies closer together. This has been further pushed for the by the recent economic problem that has saw China emerge as one of the strongest economies of the world today. Hence, multinational companies have increased their presence in most Asian economies such as China. These...
11 Pages(2750 words)Essay

...? Developing Leadership Diversity The research paper is based on a selected chapter in the book, particularly on developing leadership diversity and would hereby identify and describe emerging ideas and examples of innovative organizations that apply the chosen concepts. Developing Leadership Diversity Leadership has long been the subject of extensive research from various business practitioners, educators and other professionals delving in theories of human behavior in organizations. With contemporary organizations evolving in complexity and scope of operations that reach global scales, the issue of...
3 Pages(750 words)Research Paper

Leadership and diversity in the WHO

...? Leadership Ethics and Diversity Case In dealing with Michael Mammone, a patient of bi-polar disorder working in the reception department of Harvard University the Executive Leader was required to formulate an intervention policy. The intervention policy would be formulated focusing on accommodating Michael in the workplace and rather not terminating him on discriminatory grounds. The Executive Leader can work in appointing an arbitrator who would endeavor to obtain potential information from Michael pertaining to the history of the bi-polar disorder and treatment obtained thereof. Herein the Executive Leader dealing with the problems can relate the diagnosis of Michael’s psychiatrist with the...
5 Pages(1250 words)Case Study

Perception of Cultural Diversity and Leadership in Global Business Environment

...Perception of Cultural Diversity and Leadership in Global Business Environment The exercise of leadership is undergoing drastic changes in the globalbusiness environment. The recent trends in the industry and commerce are the direct result of the social and cultural sharing facilitated by the first hand contacts with diverse cultures that is the result of the international nature of modern business. Leadership in business is a social construct and has to function in a context. However, gaining perception of the alien and distant cultures is a formidable task. The behavior of people is the result of the interplay of cultural, historical and socio-political...
7 Pages(1750 words)Essay

...﻿Diversity Leadership in IHRM Introduction Diversity is often referred to as the differences between the individuals (Hartley, 2006). The dissimilarities among individuals materialize in both non visible and visible aspects. Some of the key examples of diversity among the individuals are dissimilarities in gender, age, skills, sexual preferences, learning styles, tenure, etc. These differences are evident the workplace but at times the differences are not visible. “Excellence through diversity is one of the Chancellor's goals”, yet this term are often faces confusion, controversy and tension. Regarding this aspect, scholars such as Griffin (2005)...
11 Pages(2750 words)Essay

...Leadership Philosophy and Diversity ment Nursing leadership philosophy Leadership contains many qualities and definitions,therefore becoming complicated to define. Porter-O’Grady defined leadership as a process of goal identification, motivation of other people, and offering support for the achievement of negotiated goals that are mutual (Carey, Philippon, & Cummings, 2011). Heather and Laschin (2013) suggest that in clinical practices, leadership is precisely defined as a process of clinical care direct involvement while influencing others so that they can improve the care they provide to patients. The most important role of a leader is...
6 Pages(1500 words)Essay

...﻿ 1) Initial reaction to this story and my reaction. A conflict of the culture is evident, the manager, Evans lacked the leadership skills to manage multi-racial and multiculturalism organization. A positive organization taps the best workforce in diversity not on the basis gender, race, color, religion, sex-orientation and able-bodiedness but on there skills, creativity, talents and idea they are bringing in to the organization. The organization had passed the test of workforce diversity but the managers lacked the skills of managing multiculturalism. The manager, Evans lacked relevant communications skills and the three main leadership skills; namely team...
4 Pages(1000 words)Essay
sponsored ads
Save Your Time for More Important Things
Let us write or edit the assignment on your topic "Diversity and Leadership" with a personal 20% discount.
GRAB THE BEST PAPER

Let us find you another Assignment on topic Diversity and Leadership for FREE!