Strategic Assessment of Wal-Mart for an ITM class - Essay Example

Comments (0)
Add to wishlistDelete from wishlist
Cite this document
Summary
The world’s largest retailer Wal-Mart is currently facing too many strategic problems and they are struggling to compete effectively with its competitors. Nobody has any doubt about the capacity and resources of Wal-Mart. However in recent times, its sales growth has come…
Download full paperFile format: .doc, available for editing
HIDE THIS PAPERGRAB THE BEST PAPER92.7% of users find it useful 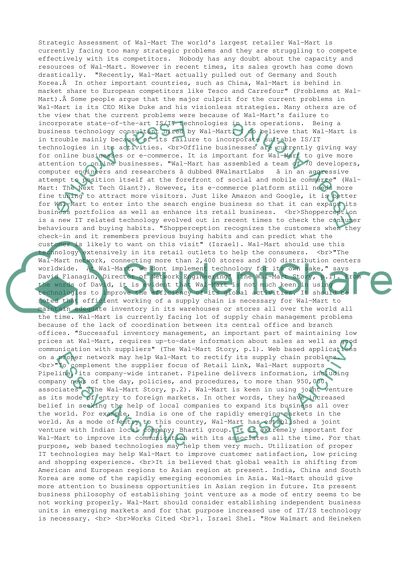 Strategic Assessment of Wal-Mart The world’s largest retailer Wal-Mart is currently facing too many strategic problems and they are struggling to compete effectively with its competitors. Nobody has any doubt about the capacity and resources of Wal-Mart. However in recent times, its sales growth has come down drastically. “Recently, Wal-Mart actually pulled out of Germany and South Korea.  In other important countries, such as China, Wal-Mart is behind in market share to European competitors like Tesco and Carrefour” (Problems at Wal-Mart). Some people argue that the major culprit for the current problems in Wal-Mart is its CEO Mike Duke and his visionless strategies. Many others are of the view that the current problems were because of Wal-Mart’s failure to incorporate state-of-the-art IS/IT technologies in its operations. Being a business technology consultant hired by Wal-Mart, I do believe that Wal-Mart is in trouble mainly because of its failure to incorporate suitable IS/IT technologies in its activities.
Offline businesses are currently giving way for online businesses or e-commerce. It is important for Wal-Mart to give more attention to online businesses. “Wal-Mart has assembled a team of 70 developers, computer engineers and researchers — dubbed @WalmartLabs — in an aggressive attempt to position itself at the forefront of social and mobile commerce” (Wal-Mart: The Next Tech Giant?). However, its e-commerce platform still needs more fine tuning to attract more visitors. Just like Amazon and Google, it is better for Wal-Mart to enter into the search engine business so that it can expand its business portfolios as well as enhance its retail business.
Shopperception is a new IT related technology evolved out in recent times to check the consumer behaviours and buying habits. “Shopperception recognizes the customers when they check-in and it remembers previous buying habits and can predict what the customer is likely to want on this visit” (Israel). Wal-Mart should use this technology extensively in its retail outlets to help the consumers.
“The Wal-Mart network, connecting more than 2,400 stores and 100 distribution centers worldwide. At Wal-Mart, we dont implement technology for its own sake," says David Flanagin, Director of Network Engineering” (The Wal-Mart Story, p.1). From the words of David, it is evident that Wal-Mart is not much keen in using technologies to improve the efficiency of its global activities. It should be noted that efficient working of a supply chain is necessary for Wal-Mart to maintain adequate inventory in its warehouses or stores all over the world all the time. Wal-Mart is currently facing lot of supply chain management problems because of the lack of coordination between its central office and branch offices. “Successful inventory management, an important part of maintaining low prices at Wal-Mart, requires up-to-date information about sales as well as good communication with suppliers” (The Wal-Mart Story, p.1). Web based applications on a proper network may help Wal-Mart to rectify its supply chain problems.
“To complement the supplier focus of Retail Link, Wal-Mart supports Pipeline, its company-wide intranet. Pipeline delivers information, including company news of the day, policies, and procedures, to more than 950,000 associates” (The Wal-Mart Story, p.2). Wal-Mart is keen in using joint venture as its mode of entry to foreign markets. In other words, they have increased belief in seeking the help of local companies to expand its business all over the world. For example, India is one of the rapidly emerging markets in the world. As a mode of entry to this country, Wal-Mart has established a joint venture with Indian local company; Bharti group. It is extremely important for Wal-Mart to improve its communication with its associates all the time. For that purpose, web based technologies may help them very much. Utilization of proper IT technologies may help Wal-Mart to improve customer satisfaction, low pricing and shopping experience.
It is believed that global wealth is shifting from American and European regions to Asian region at present. India, China and South Korea are some of the rapidly emerging economies in Asia. Wal-Mart should give more attention to business opportunities in Asian region in future. Its present business philosophy of establishing joint venture as a mode of entry seems to be not working properly. Wal-Mart should consider establishing independent business units in emerging markets and for that purpose increased use of IT/IS technology is necessary.

“Strategic Assessment of Wal-Mart for an ITM Class Essay”, n.d. https://studentshare.org/management/1614451-strategic-assessment-of-wal-mart-for-an-itm-class.
Comments (0)
Click to create a comment or rate a document

...? Wal-Mart: Strategic Management Activities and Strategic Competitiveness (Add (Add (Add Introduction Wal-Mart isthe public corporation chosen for this assignment. It is a multinational corporation operating in the retail industry, headquartered at Bentonville in the United States. This paper will analyze Wal-Mart’s strategic management activities and strategic competitiveness by answering the given questions. Globalization and Technology Globalization and technological developments over the last few decades played a notable role in making Walmart the largest retailer in the world. As Vijaya (2010) points out, globalization enhanced cross border transaction of money, labor, ideas, and cultures; and as a result, Wal-Mart could take... market...
4 Pages(1000 words)Assignment

Differentiate the role of the System Analyst versus other I.T. roles

...Strategic Management of Cost: Wal-Mart YOUR FULL YOUR INSTITUION OR SCHOOL Strategic Management of Cost: Wal-Mart Within the spectrum of American retailers, Wal-Mart is certainly notable as an industry leader and major player in the discount retail market. As the case study indicates, by the end of 2003 Wal-Mart had become both the world's largest company and the world's largest private employer (Ghemawat, Mark, & Bradley 2004: 23). Upon review of the information in the study, it is clear that the company has a focused strategy regarding cost management. In fact,...
10 Pages(2500 words)Essay

... Wal-Mart Wal-Mart's humble beginnings started out in the 1940's as a variety store franchise In Bentonville, Arkansas. Wal-Mart's founder, Sam Walton Ben Franklin stores were a chain of variety stores owned by Butler Brothers, a regional retailer. Among, included in the Butler Brothers franchises included variety stores such as the Ben Franklins and a chain of department stores known as the Federated Stores. (Wal-Mart) On October 31, 1969 Wal-Mart was established as a corporation under the name Wal-Mart Stores, Inc. Very soon after in 1970, this was followed by the opening of Wal-Mart's business headquarters in Bentonville, Arkansas and the opening Wal-Mart's very first distribution center. (Wal-Mart) Currently, Wal-Mart operates... ...
4 Pages(1000 words)Case Study

...Wal-Mart: Strategic Management How attractive was the discount retailing industry in the USA when Wal-Mart first began operations in the 1950s (Using the "Five Forces" framework for Industry Analysis) Wal-Mart began its journey way back in 1962, when Sam Walton opened the first discount store in Rogers, Ark. The retail chain has gone from strength to strength ever since. Incorporated as Wal-Mart Inc. on October 31, 1969, today the company has a formidable presence in many countries around the world. While in today's context it can be said for sure that the retail business has become quite...
11 Pages(2750 words)Essay

..., which was not effective because it was expensive. Wal-Mart obtained time in the television to display their products and to feature them at the low prices that make them very reputable (Soderquist, 2005). This worked because the customers knew the whole range of products and their prices when going to shop in Wal-Mart. Target audience Wal-Mart is very popular amongst the low and middle-class income earners. Wal-Mart targets the blue collar and the middle class shoppers who are not used to frequenting the big malls (Soderquist, 2005). This is because of the low prices that they offer to this group of people. Wal-Mart has opened up many outlets including in areas that are normally ignored by other retailers. It is also estimated... that...
2 Pages(500 words)Research Paper
sponsored ads
Save Your Time for More Important Things
Let us write or edit the essay on your topic "Strategic Assessment of Wal-Mart for an ITM class" with a personal 20% discount.
GRAB THE BEST PAPER

Let us find you another Essay on topic Strategic Assessment of Wal-Mart for an ITM class for FREE!