Comments (0)
Add to wishlistDelete from wishlist
Cite this document
Summary
Saudi Aramco, or fully known as Saudi Arabian Oil Company, is reportedly owned by the state of the Kingdom of Saudi Arabia (Saudi Arabian Oil Company, 2012). The organization has made a mark in the global energy market as a leader in sourcing, refining, and marketing of…
Download full paperFile format: .doc, available for editing
HIDE THIS PAPERGRAB THE BEST PAPER94.2% of users find it useful 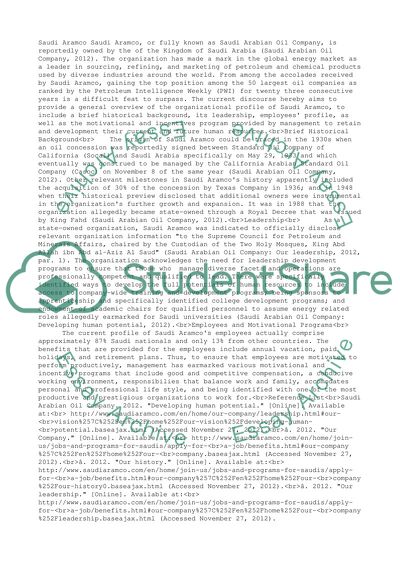 Saudi Aramco Saudi Aramco, or fully known as Saudi Arabian Oil Company, is reportedly owned by the of the Kingdom of Saudi Arabia (Saudi Arabian Oil Company, 2012). The organization has made a mark in the global energy market as a leader in sourcing, refining, and marketing of petroleum and chemical products used by diverse industries around the world. From among the accolades received by Saudi Aramco, gaining the top position among the 50 largest oil companies as ranked by the Petroleum Intelligence Weekly (PWI) for twenty three consecutive years is a difficult feat to surpass. The current discourse hereby aims to provide a general overview of the organizational profile of Saudi Aramco, to include a brief historical background, its leadership, employees’ profile, as well as the motivational and incentives program provided by management to retain and development their current and future human resources.
Brief Historical Background
The origin of Saudi Aramco could be traced in the 1930s when an oil concession was reportedly signed between Standard Oil Company of California (Socal) and Saudi Arabia specifically on May 29, 1933 and which eventually was construed to be managed by the California Arabian Standard Oil Company (Casoc) on November 8 of the same year (Saudi Arabian Oil Company, 2012). Other relevant milestones in Saudi Aramco’s history apparently included the acquisition of 30% of the concession by Texas Company in 1936; and in 1948 when their historical preview disclosed that additional owners were instrumental in the organization’s further growth and expansion. It was in 1988 that the organization allegedly became state-owned through a Royal Decree that was issued by King Fahd (Saudi Arabian Oil Company, 2012).
Leadership
As a state-owned organization, Saudi Aramco was indicated to officially disclose relevant organization information “to the Supreme Council for Petroleum and Minerals Affairs, chaired by the Custodian of the Two Holy Mosques, King Abd Allah ibn Abd al-Aziz Al Saud” (Saudi Arabian Oil Company: Our leadership, 2012, par. 1). The organization acknowledges the need for leadership development programs to ensure that those who manage diverse facets and operations are professionally competent and qualified to lead. There were specifically identified ways to develop the full potentials of human resources to include access to company-wide training and development programs; being sponsors to apprenticeship and specifically identified college development programs; and endowment of academic chairs for qualified personnel to assume energy related roles allegedly earmarked for Saudi universities (Saudi Arabian Oil Company: Developing human potential, 2012).
Employees and Motivational Programs
The current profile of Saudi Aramco’s employees actually comprise approximately 87% Saudi nationals and only 13% from other countries. The benefits that are provided for the employees include annual vacation, paid holidays, and retirement plans. Thus, to ensure that employees are motivated to perform productively, management has earmarked various motivational and incentive programs that include good and competitive compensation, a conducive working environment, responsibilies that balance work and family, accomodates personal and professional life style, and being identified with one of the most productive and prestigious organizations to work for.
Reference List
Saudi Arabian Oil Company. 2012. "Developing human potential." [Online]. Available at:
http://www.saudiaramco.com/en/home/our-company/leadership.html#our-
vision%257C%252Fen%252Fhome%252Four-vision%252Fdeveloping-human-
potential.baseajax.html (Accessed November 27, 2012).
—. 2012. "Our Company." [Online]. Available at:
http://www.saudiaramco.com/en/home/join-us/jobs-and-programs-for-saudis/apply-for-
a-job/benefits.html#our-company%257C%252Fen%252Fhome%252Four-
company.baseajax.html (Accessed November 27, 2012).
—. 2012. "Our history." [Online]. Available at:
http://www.saudiaramco.com/en/home/join-us/jobs-and-programs-for-saudis/apply-for-
a-job/benefits.html#our-company%257C%252Fen%252Fhome%252Four-
company%252Four-history0.baseajax.html (Accessed November 27, 2012).
—. 2012. "Our leadership." [Online]. Available at:
http://www.saudiaramco.com/en/home/join-us/jobs-and-programs-for-saudis/apply-for-
a-job/benefits.html#our-company%257C%252Fen%252Fhome%252Four-
company%252Fleadership.baseajax.html (Accessed November 27, 2012). Read More
Share:
Tags
Cite this document
(“Saudi Aramco oil company Essay Example | Topics and Well Written Essays - 500 words”, n.d.)
Retrieved from https://studentshare.org/management/1610074-saudi-aramco-oil-company

...? The Impact of ARAMCO on the Saudi Arabian Society Introduction Saudi Aramco, previously known as the Arabian-American Oil Company (ARAMCO) was once the largest American enterprise outside of the US. With the discovery of oil in 1938, Saudi Arabia has grown wealthy from exporting oil which has become the mainstay of the Saudi economy. Saudi Aramco through its management of 98% of the countries oil resources (Jaffe and Elass 2007) has had a significant impact on the Saudi Arabian Society....
4 Pages(1000 words)Research Paper

The performance of Saudi Aramco

...controls the largest known oil reserves in the world and is one of the most profitable business ventures on earth (Saudi Aramco Home, 2011). The research therefore employs the model prescribed by Hillgren & Morse to analyse the internal systems and structures of Saudi Aramco that enables the company to maintain its current capacity of producing 12 million barrels of petroleum (Saudi Aramco Annual Report, 2010 p6) each day and also refine, transport and market a similar volume of oil each day. The paper draws on information from the Saudi Aramco website...
9 Pages(2250 words)Essay

...to the environment. Companies like Saudi Aramco (Saudi Arabian Oil Company), a government controlled oil company in Saudi Arabia, conduct many studies and surveys before creating a real product, oil. Saudi Aramco also conducts diversification practices to maximise the use of resources and increase profit, practices which are healthy for the company but detrimental to the public because it involves extraction of new materials from the environment. (Garbie et al., 2008) CSR practices in the industry are in line with the...
40 Pages(10000 words)Dissertation

Economic Activity of the Saudi Aramco Company, as a Monopoly

...producing companies in the world and is controlled by Saudi Government besides discussing how government can block the emergence of private monopolies. Saudi AramcoSaudi Aramco is the largest oil companies in the world which produces, manufactures, markets oil and natural gas products all over the world. Being the largest, it is also considered as one of the strategic assets of Saudi Arabia as it works under the protection of Saudi Arabian government and is considered as a monopoly over the oil in Saudi Arabia....
4 Pages(1000 words)Essay

...﻿ Organisational Behaviour: Saudi Aramco Introduction This assignment focuses on the internal organisational structure and culture at Saudi Aramco, a large, multi-national oil business. This paper will highlight the cultural aspects of Saudi Aramco, focusing on the organisational culture which exists at the company and how this culture impacts routine business operations. This assessment aims to paint a clear picture of what drives the cultural mechanisms at the company and the degree to which the business culture supports organisational goals. The point of view is that of Fire Instructor for the Fire Protection Department at Aramco, however this position works with many different, diverse employees at the organisation, thus... from a...
15 Pages(3750 words)Article

...Background of Coca-Cola The Coca-Cola Company is a leading manufacturer, marketer, and distributor of syrups and non-alcoholic beverage concentrates throughout the world. The company licenses or owns over 500 brands and has its operations in over 200 countries across the world. The Coca-Cola Company “is a marketing model not just for mega”. This study has the main objective of looking into the strategic management process employed by the Coca-Cola Company in order to counter the external factors affecting the company. This study is meant to examine how the company is strategically positioned in the world market of soft drinks. Given that...
4 Pages(1000 words)Assignment

...refinery capacity. Last year, Saudi Arabia’s export earnings came from natural gas with 100030 million cubic meters exported globally (Bronson, 56). Before Saudi Arabia controlled its oil industry, the first king of Saudi Arabia Abd al Aziz Ibn Abd granted oil concession in 1923 to British investment groups who exploited, and utilized the concession granted. It is after the discovery of first oil reserve in 1938 that the concession agreement was changed to Aramco’s concession. It allowed an equal haring of profits between the company and the government on a fifty-fifty basis. With the discovery...
2 Pages(500 words)Essay

...state in Western Asia covering a land area of approximately 2,150,000 km2. it is the second largest in the Arab world after Algeria. Its neighboring states are Jordan and Iraq to the north, Kuwait to the northeast, Qatar, Bahrain and the United Arab Emirates to the east, Oman to the southeast, and Yemen in the south. Currently the Kingdom has a population of 28.7 million people and is a world leader in the production an export of oil. The country’s national petroleum and natural gas production is called Saudi Aramco. The company is Arabian American and is based in Dhahran. Saudi Aramco is among the largest integrated energy production...
4 Pages(1000 words)Essay

Comparison of Saudi Aramco and Shell

Let us find you another Essay on topic Saudi Aramco oil company for FREE!