Comments (0)
Add to wishlistDelete from wishlist
Cite this document
Summary
In fact, self-confidence of a leader gives birth to trustworthiness because a leader can only come upon others’ expectations when he/she is confident about his/her own…
Download full paperFile format: .doc, available for editing
HIDE THIS PAPERGRAB THE BEST PAPER98% of users find it useful 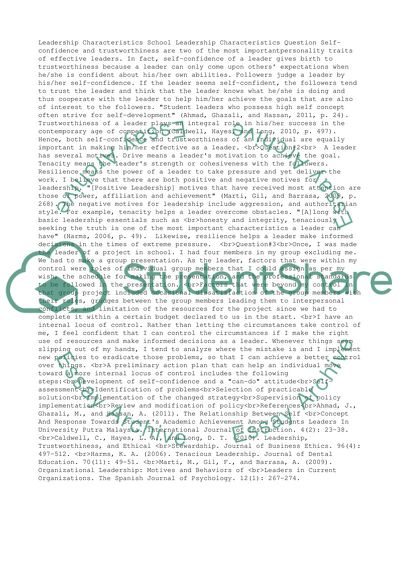 Leadership Characteristics School Leadership Characteristics Question Self-confidence and trustworthiness are two of the most importantpersonality traits of effective leaders. In fact, self-confidence of a leader gives birth to trustworthiness because a leader can only come upon others’ expectations when he/she is confident about his/her own abilities. Followers judge a leader by his/her self-confidence. If the leader seems self-confident, the followers tend to trust the leader and think that the leader knows what he/she is doing and thus cooperate with the leader to help him/her achieve the goals that are also of interest to the followers. “Student leaders who possess high self concept often strive for self-development” (Ahmad, Ghazali, and Hassan, 2011, p. 24). Trustworthiness of a leader plays an integral role in his/her success in the contemporary age of competition (Caldwell, Hayes, and Long, 2010, p. 497). Hence, both self-confidence and trustworthiness of an individual are equally important in making him/her effective as a leader.
Question#2
A leader has several motives. Drive means a leader’s motivation to achieve the goal. Tenacity means the leader’s strength or cohesiveness with the followers. Resilience means the power of a leader to take pressure and yet deliver the work. I believe that there are both positive and negative motives for leadership. “[Positive Leadership] motives that have received most attention are those of power, affiliation and achievement” (Marti, Gil, and Barrasa, 2009, p. 268). The negative motives for leadership include aggression, and authoritarian style. For example, tenacity helps a leader overcome obstacles. “[A]long with basic leadership essentials such as
honesty and integrity, tenaciously seeking the truth is one of the most important characteristics a leader can have” (Harms, 2006, p. 49). Likewise, resilience helps a leader make informed decisions in the times of extreme pressure.
Question#3
Once, I was made the leader of a project in school. I had four members in my group excluding me. We had to make a group presentation. As the leader, factors that were within my control were roles of individual group members that I could assign as per my wish, the schedule for making the presentation, and the professional standards to be followed in the presentation.
Factors that were beyond my control in that group project included occasional dissatisfaction of the group members with their roles, grudges between the group members leading them to interpersonal conflicts, and limitation of the resources for the project since we had to complete it within a certain budget declared to us in the start.
I have an internal locus of control. Rather than letting the circumstances take control of me, I feel confident that I can control the circumstances if I make the right use of resources and make informed decisions as a leader. Whenever things seem slipping out of my hands, I tend to analyze where the mistake is and I implement new policies to eradicate those problems, so that I can achieve a better control over things.
A preliminary action plan that can help an individual move toward a more internal locus of control includes the following steps:
Development of self-confidence and a “can-do” attitude
Self-assessment
Identification of problems
Selection of practicable solution
Implementation of the changed strategy
Supervision of policy implementation
Review and modification of policy
References
Ahmad, J., Ghazali, M., and Hassan, A. (2011). The Relationship Between Self
Concept And Response Towards Student’s Academic Achievement Among Students Leaders In University Putra Malaysia. International Journal of Instruction. 4(2): 23-38.
Caldwell, C., Hayes, L. A., and Long, D. T. (2010). Leadership, Trustworthiness, and Ethical
Stewardship. Journal of Business Ethics. 96(4): 497-512.
Harms, K. A. (2006). Tenacious Leadership. Journal of Dental Education. 70(11): 49-51.
Marti, M., Gil, F., and Barrasa, A. (2009). Organizational Leadership: Motives and Behaviors of
Leaders in Current Organizations. The Spanish Journal of Psychology. 12(1): 267-274. Read More
Share:
Tags
Cite this document
(“Leadership Characteristics Research Paper Example | Topics and Well Written Essays - 500 words”, n.d.)
Leadership Characteristics Research Paper Example | Topics and Well Written Essays - 500 words. Retrieved from https://studentshare.org/management/1604885-leadership-characteristics

CHECK THESE SAMPLES OF Leadership Characteristics

..., produced innumerable computer animated pictures such as “Toy Story”, “A Bug’s Life” and others (Steve Jobs Resigns as CEO of Apple) Six leadership characteristics Jobs exhibited Few traits of quality leadership that Steve jobs possessed are enumerated and analyzed below- “Look-ahead” mindset He set precise goals and had a clear and concise vision of the future. He ensured that the vision got inculcated in the minds of everyone throughout the organization. Effective leaders like him have always envisioned exactly what they want and how they are going to achieve their goals in order to get what they want. (Lomas) Jobs always focused on what Apple should do next in the future. He always...
10 Pages(2500 words)Coursework

... Dana White is the CEO of the Ultimate Fighting Championship (UFC), a top sport league for MMA (mixed martial arts). This paper examines White’s authentic leadership characteristics, his sense of purpose, strong values for right action, how he establishes trust and demonstrates self-discipline, and the astounding passion that drives this extraordinary man. Dana White: Authentic Leader There is a lot of biographical information, fan praise, gossip, statistics, and anecdotes available about Dana White, CEO of the Ultimate Fighting Championship (UFC).. What I found most revealing, however, are the stories that provide brief glimpses into his life. They are not mainstream stories, meaning they are not about love and marriage, tragedy... ...
9 Pages(2250 words)Research Paper

...? Characteristics of Business Leadership: Steve Jobs Characteristics of Business Leadership: Steve Jobs Describe the business leader's primary business or businesses, highlighting how the leader got started and analyze the leader’s 3 major business challenges in establishing and/or running the company The late Steve Jobs is one of the people who revolutionized the computing industry to become what it is today. “He was born on February 24, 1955 and died on October 5, 2011” (Lohr, 2002). After his birth, Jobs was adopted by Paul Jobs and his wife who he loved so much that he said were his real parents and refused to name his real parents even in his autobiography. Paul...
5 Pages(1250 words)Assignment

...? Characteristics of Business Leadership Introduction: A business leader can be understood to have a significant role in an organization since it is the leader’s views and opinions that others follow with the purpose of achieving the organizational goals. Over the years, this role has been found to modify with the changing needs of the business world. The success of a business leader thus depends on how efficiently he is capable of deciding the pathway that the company needs to follow as well as manage the available resources optimally for the purpose involving all the associated organizational members (Greenleaf & Spears, 2002, pp.152-154). In this context, the present study focuses on a highly popular...
5 Pages(1250 words)Essay

...?Introduction Managerial leadership in organizations is a key enabling factor that significantly contributes in creating a motivated force for improved performance. Good leaders tend to face adversities as challenges and develop flexible approach to manage change effectively. Indeed, in the fast transforming business dynamics, they provide businesses with inimitable competitive advantage and become intrinsic part of its success. Kouzes, and Posner claim that leaders are visionary and who can inspire others (1988). The Body Shop is scintillating example of such leadership initiative which has constantly set standard for businesses across globe. Ms Anita Roddick had founded the company in 1976 and had...
5 Pages(1250 words)Research Paper

...? Characteristics of Business Leadership­­­­ (Add (Add (Add Bruce Barton once said, “Most successful men have notachieved their distinction by having some new talent or opportunity presented to them. They have developed the opportunity that was at hand” (Cited in Brainy Quotes, 2012). The very same line can be attributed to the success stories of the most lucrative business leaders of the world. They have set great examples before their successors through their business values, philosophies, vivacity and industrialism. Steven Jobs, former CEO of Apple Computer Inc who passed away recently was such an exemplar for any business leader. He conquered the world technology arena with his compact visions and innovations and thus emerged... in 1985...
5 Pages(1250 words)Essay

...Characteristics of Business Leadership Steve Jobs was an American entrepreneur, designer and a globally recognized inventor. Jobs became globally recognized for his role in Apple. He was the co- founder, chief executive and the chairman of Apple Inc. he is also a co- founder of the famous Pixar Animation Studios and also a leading figure in Walt Disney Board (Halliday, 2003). Steve Jobs started his invention job after leaving Reed College. Together with his pal and later partner Steve Wozniak they began designing computer games. He started his work in their family garage, and it is through here that they got a major breakthrough. The Byte shop purchased their first fully assembled computer. It is here...
5 Pages(1250 words)Term Paper

...Successful Characteristics of Leadership: Michelle Obama Being the first lady, Michelle Obama has been able to portray characters that her predecessors lacked or failed to portray. She has frequently been likened to Jackie Kennedy, but she has proven to be more that what Jackie was. As much as Jackie was quite a public figure in addition to being a supportive wife to JF Kennedy, Michelle is a true definition of a leader. In addition to putting her family first, she involves herself in leadership roles and publicly declares her Support for her husband. She is a leader who is not just heard, and seen but also felt. Additionally she is accessible and has been able to define herself, which is...
2 Pages(500 words)Essay

...﻿ Leadership Characteristics The field of pharmacy is undergoing transformation with pharmacists shifting from product-oriented philosophy to -centric approach. In order to steer this change, pharmacists must be adequately prepared to lead the transformation. Leading change demands unique knowledge, skills and attributes, which make an individual to lead change process. There are many attributes that pharmacy students need in order to become great leaders. However, this paper will only focus on three major attributes: courage, ability to encourage others and commitment. Courage: Courage basically means the willingness to take risk in a bid to achieve one’s desired goals and objectives even where...
1 Pages(250 words)Admission/Application Essay
sponsored ads
Save Your Time for More Important Things
Let us write or edit the research paper on your topic "Leadership Characteristics" with a personal 20% discount.
GRAB THE BEST PAPER

Let us find you another Research Paper on topic Leadership Characteristics for FREE!