Comments (0)
Add to wishlistDelete from wishlist
Cite this document
Summary
A business maintains many opportunities for improving its image and reputation with key target markets and, sometimes, even mass markets when it illustrates ethical behavior and social responsibility. In highly competitive environments, a business develops its strategic plan…
Download full paperFile format: .doc, available for editing
HIDE THIS PAPERGRAB THE BEST PAPER95.6% of users find it useful 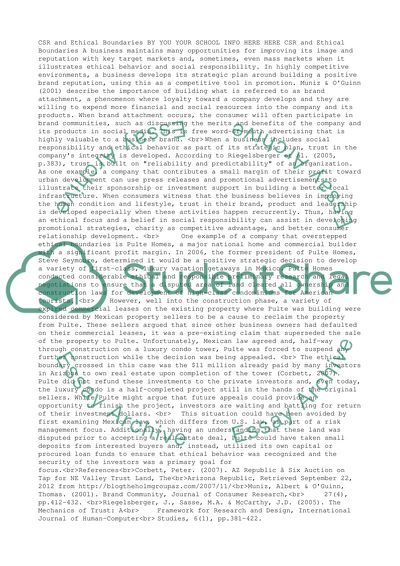 CSR and Ethical Boundaries BY YOU YOUR SCHOOL INFO HERE HERE CSR and Ethical Boundaries A business maintains many opportunities for improving its image and reputation with key target markets and, sometimes, even mass markets when it illustrates ethical behavior and social responsibility. In highly competitive environments, a business develops its strategic plan around building a positive brand reputation, using this as a competitive tool in promotion. Muniz & O’Guinn (2001) describe the importance of building what is referred to as brand attachment, a phenomenon where loyalty toward a company develops and they are willing to expend more financial and social resources into the company and its products. When brand attachment occurs, the consumer will often participate in brand communities, such as discussing the merits and benefits of the company and its products in social media. This is free word-of-mouth advertising that is highly valuable to a business brand.
When a business includes social responsibility and ethical behavior as part of its strategic plan, trust in the company’s integrity is developed. According to Riegelsberger et al. (2005, p.383), trust is built on “reliability and predictability” of an organization. As one example, a company that contributes a small margin of their profit toward urban development can use press releases and promotional advertisements to illustrate their sponsorship or investment support in building a better local infrastructure. When consumers witness that the business believes in improving the human condition and lifestyle, trust in their brand, product and leadership is developed especially when these activities happen recurrently. Thus, having an ethical focus and a belief in social responsibility can assist in developing promotional strategies, charity as competitive advantage, and better consumer relationship development.
One example of a company that overstepped ethical boundaries is Pulte Homes, a major national home and commercial builder with a significant profit margin. In 2006, the former president of Pulte Homes, Steve Seymoure, determined it would be a positive strategic decision to develop a variety of first-class, luxury vacation getaways in Mexico. Pulte Homes conducted considerable ethical and responsible preliminary research and legal negotiations to ensure that a disputed area of land cleared all ownership and construction laws for development of high-class condominiums for American tourists.
However, well into the construction phase, a variety of expired commercial leases on the existing property where Pulte was building were considered by Mexican property sellers to be a cause to reclaim the property from Pulte. These sellers argued that since other business owners had defaulted on their commercial leases, it was a pre-existing claim that superseded the sale of the property to Pulte. Unfortunately, Mexican law agreed and, half-way through construction on a luxury condo tower, Pulte was forced to suspend any further construction while the decision was being appealed.
The ethical boundary crossed in this case was the $11 million already paid by many investors in Arizona to own real estate upon completion of the tower (Corbett, 2007). Pulte did not refund these investments to the private investors and, even today, the luxury condo is a half-completed project still in the hands of the original sellers. While Pulte might argue that future appeals could provide an opportunity to finish the project, investors are waiting and battling for return of their investment dollars.
This situation could have been avoided by first examining Mexican law, which differs from U.S. law, as part of a risk management focus. Additionally, having an understanding that these land was disputed prior to accepting a real estate deal, Pulte could have taken small deposits from interested buyers and, instead, utilized its own capital or procured loan funds to ensure that ethical behavior was recognized and the security of the investors was a primary goal for focus.
References
Corbett, Peter. (2007). AZ Republic – Six Auction on Tap for NE Valley Trust Land, The
Arizona Republic, Retrieved September 22, 2012 from http://blogtheholmgroupaz.com/2007/11/
Muniz, Albert & O’Guinn, Thomas. (2001). Brand Community, Journal of Consumer Research,
27(4), pp.412-432.
Riegelsberger, J., Sasse, M.A. & McCarthy, J.D. (2005). The Mechanics of Trust: A
Framework for Research and Design, International Journal of Human-Computer
Studies, 6(1), pp.381-422. Read More
Share:
Tags
Cite this document
(“Week2 Term Paper Example | Topics and Well Written Essays - 500 words”, n.d.)
Week2 Term Paper Example | Topics and Well Written Essays - 500 words. Retrieved from https://studentshare.org/management/1603742-week2

CHECK THESE SAMPLES OF Week2

...SALEH ALOTHMAN Week 2: CAL Report Word Count: 694 (excluding reference list) This week our topic has been workplace morality and ethics. In 1992 Badaracco discussed four aspects of ethics for those in the workplace: that is personal ethics; ethics as economic agents ; ethics as leaders and ethical commitment to wider society. More recently McDonald (2010) described how a person’s culture and context affected their attitudes to such things as ethics and morality. If that is so it also means differences in culture will mean differences in the ethical codes followed. To take one example ethical concepts in Kuwait may well be different from ideas on the topic held within the United Kingdom. The practice of ethics will also depends... ALOTHMAN...
2 Pages(500 words)Essay

...HOMEWORK Part listening skills The listening was limited to approximately seven percent of the total conversation. The listening process was difficult to understand and capture all the information communicated to me in the process of the conversation. Therefore, majority of individuals do not understand the message that is passed to them through the process of communication. We tend to listen more by the eyes rather than the ears. This is the main reason why listening becomes a problem to a majority of people across the globe (Andrew, 2011). Breakdown in the listening experience During my listening process, breakdown was experienced at evaluation step. The evaluation of the message communicated to me became difficult... Part listening...
2 Pages(500 words)Admission/Application Essay

The 4 pillars of SMS

...Finance and Auditing Week one Strategies by foreign corporations for minimizing tax obligation in USA Every in the USA has itstax regime, a fact that can be used by foreign corporations to their advantage. The foreign corporation would need to create subsidiary company or a separate company in the jurisdiction with low taxation regimes and commit financial assistance in form of grant loans from a foreign financial institution like a bank to evade taxation (Barney, 2008; PWC, 2008). The affiliate company would need to pay the mother company in form of dividend or loyalty, which are not taxed, thereby minimizing tax obligations. Creation a subsidiary or Branch office as Strategies by foreign corporations for minimizing tax... and Auditing Week...
1 Pages(250 words)Essay
sponsored ads
Save Your Time for More Important Things
Let us write or edit the term paper on your topic "Week2" with a personal 20% discount.
GRAB THE BEST PAPER

Let us find you another Term Paper on topic Week2 for FREE!