Comments (0)
Add to wishlistDelete from wishlist
Cite this document
Summary
This paper 'Leadership Evolution - the Power of Followership" focuses on the fact that the most affluent part of the writer’s work has to do with the position of a leader among the followers. The writer by presentation to give the indication that leaders aren't lords but part of the larger group. …
Download full paperFile format: .doc, available for editing
HIDE THIS PAPERGRAB THE BEST PAPER95.7% of users find it useful 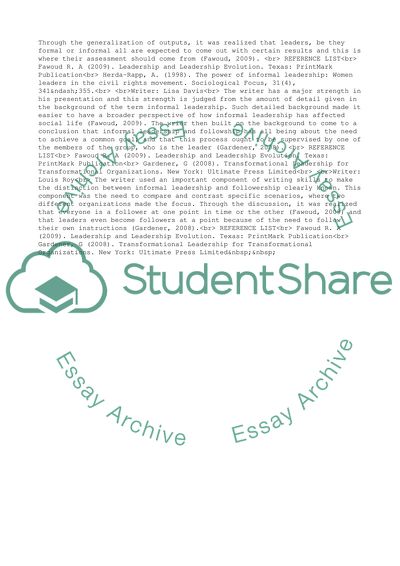 Extract of sample "Leadership Evolution - the Power of Followership"

Through the generalization of outputs, it was realized that leaders, be they formal or informal all are expected to come out with certain results and this is where their assessment should come from (Fawoud, 2009).
REFERENCE LIST
Fawoud R. A (2009). Leadership and Leadership Evolution. Texas: PrintMark Publication
Herda-Rapp, A. (1998). The power of informal leadership: Women leaders in the civil rights movement. Sociological Focus, 31(4), 341–355.

Writer: Lisa Davis
The writer has a major strength in his presentation and this strength is judged from the amount of detail given in the background of the term informal leadership. Such detailed background made it easier to have a broader perspective of how informal leadership has affected social life (Fawoud, 2009). The wrier then built on the background to come to a conclusion that informal leadership and followship has all being about the need to achieve a common goal; and that this process ought to be supervised by one of the members of the group, who is the leader (Gardener, 2008).
REFERENCE LIST
Fawoud R. A (2009). Leadership and Leadership Evolution. Texas: PrintMark Publication
Gardener, G (2008). Transformational Leadership for Transformational Organizations. New York: Ultimate Press Limited

Writer: Louis Roy
The writer used an important component of writing skills to make the distinction between informal leadership and followership clearly known. This component was the need to compare and contrast specific scenarios, where two different organizations made the focus. Through the discussion, it was realized that everyone is a follower at one point in time or the other (Fawoud, 2009) and that leaders even become followers at a point because of the need to follow their own instructions (Gardener, 2008).
REFERENCE LIST
Fawoud R. A (2009). Leadership and Leadership Evolution. Texas: PrintMark Publication
Gardener, G (2008). Transformational Leadership for Transformational Organizations. New York: Ultimate Press Limited   Read More
Share:
Tags
Cite this document
(Leadership Evolution - the Power of Followership Assignment - 1, n.d.)
Leadership Evolution - the Power of Followership Assignment - 1. Retrieved from https://studentshare.org/management/1602976-please-reply-to-at-least-4-student-with-no-more-that-60-words-plus-2-references

“Leadership Evolution - the Power of Followership Assignment - 1”, n.d. https://studentshare.org/management/1602976-please-reply-to-at-least-4-student-with-no-more-that-60-words-plus-2-references.
Comments (0)
Click to create a comment or rate a document

CHECK THESE SAMPLES OF Leadership Evolution - the Power of Followership

The Evolution of leadership

... at hand. These styles include participative style, autocratic and leisez faire. In participative style, employees are actively involved in decision making process. The autocratic style on the other hand is where the leaders just make the decisions without consulting the staff. In this case, the staffs are required to adhere to the decisions without questions. The latter style of leadership is where employees are solely allowed to make decisions. It is normally very effective where employees are highly experienced and are therefore competent enough. This is part of great evolution that has taken place in healthcare sector. (Quinn, 2006) Political choices have also influenced the administration of healthcare facilities as a whole... ...
6 Pages(1500 words)Essay

...Article critique Robert Allio in his article, Bad leaders: how they get that way and what to do about them make a distinction of how bad leadership traits can make a CEOs function wrongly and forced him/her to make an exit. The scrutiny of leaders has become more far more intense on account of Corporate Governance in the post Sarbenes-Oxley Rules environment. The moot point of the article as put by Allio is that why bad leaders are not recognized much before they bring damage to the organization, and how good people who lack the leadership trait but are excellent in delivering results are not identified much earlier. Bad Leader believes that employees working under him are basically lazy and the work,...
5 Pages(1250 words)Essay

...of the Crew Resource Management module up to the fifth generation. Flying is the safest means of travel in the world today. Being as such, there has been various procedural undertaking seeking to establish precise resolutions ensuring the safety of flying. The crew resource management is a model of safety management that guides towards rectification of errors. CRM’s constituents are enhanced towards ensuring flight safety, cohesive communication between the crew, among other safety ensuring undertakings (Shea and Robert, 254). The third generation CRM advocates for a broadening of the scope of leadership and followership, ensuring good cockpit climate and structure that is important in ensuring that...
4 Pages(1000 words)Essay

...leadership practices right after the emergence of behavioural leadership to date. For instance, today’s organizational leadership has become more oriented towards collaborative efforts among interested groups. Finally, the evolution of leadership thinking under participative theory accounts for laissez-faire style of leadership. Under laissez-faire leadership style, the leader gives other people the power to decide on the necessary, relevant, or applicable course of action (Dasborough, 2006, p.169). This style has its functional implications, especially in relation to its overall effectiveness and...
8 Pages(2000 words)Essay

...Learn to Lead by Following: Michael Frisina The convincingly argues that a leader can never be effective if there are no followers. “If you think you are leading and no one is following you, then you are just having a nice walk” (Frisina 2005). His argument builds the understanding that leadership is not just a position of authority, but a position of positive influence. In addition, the author also differentiates between the five different types of followers (‘yes people, sheep, survivors, alienated followers, and effective followers’) (Frisina 2005). Among the five of them, effective followers have interpersonal skills that seek understanding before being understood. The author points out that leaders and followers have...
1 Pages(250 words)Essay

...Leadership Power s A leader is an individual can influence the thoughts and actions of a segment of people based on their powerful ways of doing things as well as strong ideologies that these people adore (Antonakis, Cianciolo, & Sternberg, 2004). On the other hand, leadership is the process of influencing the activities of a group or a person in towards goal achievement in a certain situation. In other words, it is a process of social influence where an individual enlists the support of others in order to achieve a common task. Therefore, drawing on a variety of sources the paper will discuss the interaction among leaders’ sources, motives, and influence tactics. There is a notable correlation between power and leadership. Hersey... ,...
2 Pages(500 words)Essay
sponsored ads
Save Your Time for More Important Things
Let us write or edit the assignment on your topic "Leadership Evolution - the Power of Followership" with a personal 20% discount.
GRAB THE BEST PAPER

Let us find you another Assignment on topic Leadership Evolution - the Power of Followership for FREE!