Comments (0)
Add to wishlistDelete from wishlist
Cite this document
Summary
For this purpose, the web 2.0 platforms such as facebook have turned out to be of prime significance and extremely useful social avenues for the career growth and…
Download full paperFile format: .doc, available for editing
HIDE THIS PAPERGRAB THE BEST PAPER97.1% of users find it useful 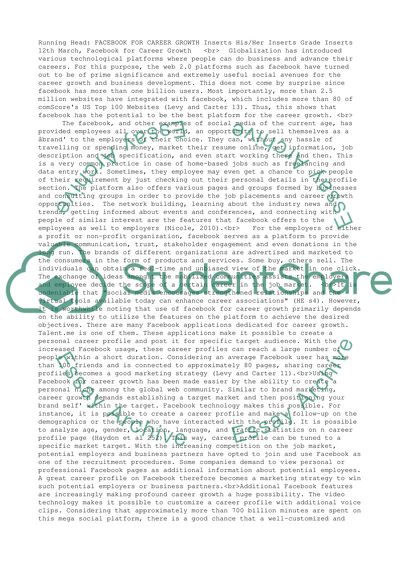 Running Head: FACEBOOK FOR CAREER GROWTH Inserts His/Her Inserts Grade Inserts 12th March, Facebook for Career Growth
Globalization has introduced various technological platforms where people can do business and advance their careers. For this purpose, the web 2.0 platforms such as facebook have turned out to be of prime significance and extremely useful social avenues for the career growth and business development. This does not come by surprise since facebook has more than one billion users. Most importantly, more than 2.5 million websites have integrated with facebook, which includes more than 80 of comScore’s US Top 100 Websites (Levy and Carter 13). Thus, this shows that facebook has the potential to be the best platform for the career growth.
The facebook, and other examples of social media of the current age, has provided employees all over the world, an opportunity to sell themselves as a ‘brand’ to the employers of their choice. They can, without any hassle of travelling or spending money, market their resume online, get information, job description and job specification, and even start working there and then. This is a very common practice in case of home-based jobs such as freelancing and data entry work. Sometimes, they employee may even get a chance to pick people of their requirement by just checking out their personal details in the profile section. The platform also offers various pages and groups formed by businesses and consulting groups in order to provide the job placements and career growth opportunities. The network building, learning about the industry news and trends, getting informed about events and conferences, and connecting with people of similar interest are the features that facebook offers to the employees as well to employers (Nicole, 2010).
For the employers of either a profit or non-profit organization, facebook serves as a platform to provide valuable communication, trust, stakeholder engagement and even donations in the long run. The brands of different organizations are advertised and marketed to the consumers in the form of products and services. Some buy, others sell. The individuals can obtain a real-time and unbiased view of the market in one click. The exchange of ideas amongst the mobilized communities assists the employers and employee decide the scope of a certain career in the job market.
It is undeniable that “social media encourages strengthened relationships and the virtual tools available today can enhance career associations” (HE s4). However, it is worthwhile noting that use of facebook for career growth primarily depends on the ability to utilize the features on the platform to achieve the desired objectives. There are many Facebook applications dedicated for career growth. Talent.me is one of them. These applications make it possible to create a personal career profile and post it for specific target audience. With the increased Facebook usage, these career profiles can reach a large number of people within a short duration. Considering an average Facebook user has more than 100 friends and is connected to approximately 80 pages, sharing career profiles becomes a good marketing strategy (Levy and Carter 11).
Using Facebook for career growth has been made easier by the ability to create a personal niche among the global web community. Similar to brand marketing, career growth demands establishing a target market and then positioning your brand self’ within the target. Facebook technology makes this possible. For instance, it is possible to create a career profile and make a follow-up on the demographics or the people who have interacted with the profile. It is possible to analyze age, gender, location, language, and traffic statistics on n career profile page (Haydon et al 252). This way, career profile can be tuned to a specific market target. With the increasing competition on the job market, potential employers and business partners have opted to join and use Facebook as one of the recruitment procedures. Some companies demand to view personal or professional Facebook pages as additional information about potential employees. A great career profile on Facebook therefore becomes a marketing strategy to win such potential employers or business partners.
Additional Facebook features are increasingly making profound career growth a huge possibility. The video technology makes it possible to customize a career profile with additional voice clips. Considering that approximately more than 700 billion minutes are spent on this mega social platform, there is a good chance that a well-customized and branded career profile will attract potential viewers (Levy and Carter II). Additionally, Facebook usage among mobile phone users has grown tremendously and this has become a great marketing platform for career growth.
It is not surprising that one day, people will just be scrolling down their favorite Facebook pages in search for employers or employees. The journey to Facebook career marketing and growth is at top speed and we only expect this fast swiftness to gain momentum. Certainly, we expect career marketing to other web platforms to increase owing to the fact that more than seven million applications have been integrated with Facebook. Therefore, Facebook, as a career growth platform reaches beyond the boundaries of Facebook into the whole world of World Wide Web.
Work Cited
Haydon. John et al. Facebook Marketing for Dummies. London. John Wiley & Sons. 2012. Print.
Hispanic Engineer. Hispanic Engineer and IT. Spring 2011 26, (1); 1088-3452. Print.
Levy, Justin and Carter. Brian. Facebook Marketing: Leveraging Facebook for your Marketing Campaigns. New York: Que Publishing. 2011. Print.
Nicole Harrison, (2010). Using Social Media Tools for Career Development. Web. Retrieved on March 21. Read More
Share:
Tags
Cite this document
(“Facebook for career growth Assignment Example | Topics and Well Written Essays - 250 words”, n.d.)
Facebook for career growth Assignment Example | Topics and Well Written Essays - 250 words. Retrieved from https://studentshare.org/management/1591906-facebook-for-career-growth

...services for the Ivy League students in February, 2004. Then, they expanded its services to numerous other universities in US and Canada in March, 2004. In 2005, top companies were made eligible to utilize the services of the social network and then finally, it was made public to the whole world in 2006. The remarkable incremental growth and dominance on the social networking industry reaffirms the fact that Facebook has strong technical and management skills present in the company. The top management of the firm includes experienced and competent individuals who have had the opportunities to acquire expertise while working in some of the top IT companies in the world, such as Apple, Google and YouTube!....
15 Pages(3750 words)Essay

...? Facebook Introduction The growth of facebook since its introduction was phenomenal. When it was introduced, many people perceived it just as another communication channel or social network rather than anything else. However the influence of facebook over human life at present is tremendous and it is difficult to describe it in words. Business, marketing, advertising, politics etc are some segments in which facebook contributed heavily to the global public apart from providing instant communication opportunities. The recent political developments in Arab world are believed to be stimulated by facebook. In fact the current Arab revolution...
5 Pages(1250 words)Essay

...College: Strong response essay Face book growth, challenges and milestones Face book is a global social network operated by face book. Inc. Founded by Mark Zuckerberg with other Harvard university roommates, the company has speedily developed and signed in more than 200 million users. Within eight months, Facebook signed in more than one million users to reach 200 million users on March 28, 2009. More users are signed each day. Despite of the great achievement, the company is facing stiff challenges such as competition by the micro blogging service "Twitter", managing the needs and expectations of young, tech savvy adopters who need more open social interactions, maintaining the old users who require...
4 Pages(1000 words)Essay

...﻿Facebook Growth, Challenges and Milestones Face book is a global social network operated by face book. Inc. Founded by Mark Zuckerberg with other Harvard university roommates, the company has speedily developed and signed in more than 200 million users. Within eight months, Facebook signed in more than one million users to reach 200 million users on March 28, 2009. More users are signed each day. Despite of the great achievement, the company is facing stiff challenges such as competition by the micro blogging service “Twitter”, managing the needs and expectations of young, tech savvy adopters who need more open social interactions, maintaining the old users who require limited and selective social realms and the radical changes... the page,...
5 Pages(1250 words)Essay

...Running head: Web based web e-book Web based Face E-book Affiliation November 2009 Web based Face-E-Book business Emergence of the Internet has offered numerous opportunities to the businesses and industries to survive and grow not only in local markets as well as internationally. Lot of new and innovative types of online businesses can be seen nowadays. This report presents analysis of the new web based business development and implementation. This business will be an online book retailer shop that will facilitate the people to buy and search books online. The main inspiration of this system development has emerged from the “FaceBook”. This new web based system will be a website that offers the facility to people to...
2 Pages(500 words)Essay

Successful Career in an Non-Governmental Organization

...Client’s 23 March I would want to associate myself with an NGO so that I can learn as much as possible, it would be great to learnhow an NGO functions and it would help me greatly in the future. My career would witness growth and stability once I learn the basics. There are many skills that an individual must learn to establish a successful career and working in an NGO would facilitate the process of learning, it would make life much easier for me and also for those who would work with me in the future. The basics of MIS are extremely important to learn for me, management information system is a very fascinating thing and almost every big organization makes use of this wonderful system....
1 Pages(250 words)Essay

...Facebook Facebook Effectiveness of communication in the social media The social networking sites like Facebook involves various positive societal effects. Facebook enhances easier reach to large groups of people simultaneously. People create new friendship as well as reconnect with various people using the networking sites. People also take advantage of the websites due to the ability of reaching millions of people (Lee & Ingraffea, 2007). Experts argue that effective communication can be achieved among users of social networking sites such as Facebook. The social media sites enhance the connection with the targeted audience. This entails posting or getting the discussion started, and then coordinating the protest march. Getting... the...
5 Pages(1250 words)Essay

...Facebook Facebook is a social networking site that was founded by a 23 year old keen computer programmer, psychology student at Harvard, Mark Zuckerberg in 2005. It was not his first application since he had already launched other networking sites like Coursematch that allowed users to see those taking their degree (Harvell & Ben, 5). The Facebook platform needs that an individual creates an account that is signing up and creating a profile that will identify him or her. Friends and family use this to interact despite distance that may be an impediment when it comes to physically meeting or calling. It is important that once one joins Facebook and becomes a member, they...
2 Pages(500 words)Essay
sponsored ads
Save Your Time for More Important Things
Let us write or edit the assignment on your topic "Facebook for career growth" with a personal 20% discount.
GRAB THE BEST PAPER

Let us find you another Assignment on topic Facebook for career growth for FREE!