Comments (0)
Add to wishlistDelete from wishlist
Cite this document
Summary
This organization is also abbreviated as AFL and Once Samuel Gompers founded the organization because of vexation of numerous Knights who had parted from the KOL. Many of the Knights joined the organization since they wanted to walk out of KOL. Notably, the KOL had taught all…
Download full paperFile format: .doc, available for editing
HIDE THIS PAPERGRAB THE BEST PAPER96.3% of users find it useful 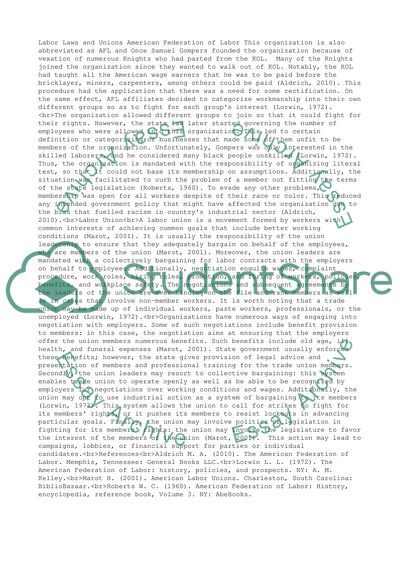 Labor Laws and Unions American Federation of Labor This organization is also abbreviated as AFL and Once Samuel Gompers founded the organization because of vexation of numerous Knights who had parted from the KOL. Many of the Knights joined the organization since they wanted to walk out of KOL. Notably, the KOL had taught all the American wage earners that he was to be paid before the bricklayer, miners, carpenters, among others could be paid (Aldrich, 2010). This procedure had the application that there was a need for some rectification. On the same effect, AFL affiliates decided to categorize workmanship into their own different groups so as to fight for each group’s interest (Lorwin, 1972).
The organization allowed different groups to join so that it could fight for their rights. However, the state law later started governing the number of employees who were allowed into this organization. This led to certain definition or categorizing of businesses that made some of them unfit to be members of the organization. Unfortunately, Gompers was only interested in the skilled laborers, and he considered many black people unskilled (Lorwin, 1972). Thus, the organization is mandated with the responsibility of organizing literal test, so that it could not base its membership on assumptions. Additionally, the situation was facilitated to curb the problem of a member not fitting the terms of the state legislation (Roberts, 1960). To evade any other problems, membership was open for all workers despite of their race or color. This reduced any intended government policy that might have affected the organization due to the bias that fuelled racism in country’s industrial sector (Aldrich, 2010).
Labor Union
A labor union is a movement formed by workers with common interests of achieving common goals that include better working conditions (Marot, 2001). It is usually the responsibility of the union leadership to ensure that they adequately bargain on behalf of the employees, who are members of the union (Marot, 2001). Moreover, the union leaders are mandated with a collectively bargaining for labor contracts with the employers on behalf to employees. Additionally, negotiation engulfs wages, complaint procedure, work roles, hiring rules, promotion, and firing of workers, policies, benefits, and workplace safety. The negotiations and subsequent agreements by the leaders of the union are ever binding on the file and rank members as well as in cases that involve non-member workers. It is worth noting that a trade union may be made up of individual workers, paste workers, professionals, or the unemployed (Lorwin, 1972).
Organizations have numerous ways of engaging into negotiation with employers. Some of such negotiations include benefit provision to members: in this case, the negotiation aims at ensuring that the employers offer the union members numerous benefits. Such benefits include old age, ill health, and funeral expenses (Marot, 2001). State government usually enforces these benefits; however, the state gives provision of legal advice and presentation of members and professional training for the trade union members. Secondly, the union leaders may resort to collective bargaining: this system enables trade union to operate openly as well as be able to be recognized by employers for negotiations over working conditions and wages. Additionally, the union may opt to use industrial action as a system of bargaining to its members (Lorwin, 1972). This system allows the union to call for strikes to fight for its members’ rights, or it pushes its members to resist lockouts in advancing particular goals. Finally, the union may involve politics or legislation in fighting for its members’ rights: the union may involve the legislature to favor the interest of the members of the union (Marot, 2001). This action may lead to campaigns, lobbies, or financial support for parties or individual candidates.
References
Aldrich M. A. (2010). The American Federation of Labor. Memphis, Tennessee: General Books LLC.
Lorwin L. L. (1972). The American Federation of Labor: history, policies, and prospects. NY: A. M. Kelley.
Marot H. (2001). American Labor Unions. Charleston, South Carolina: BiblioBazaar.
Roberts W. C. (1960). American Federation of Labor: History, encyclopedia, reference book, Volume 3. NY: AbeBooks. Read More
Share:
Tags
Cite this document
(“Labor Laws and Unions Essay Example | Topics and Well Written Essays - 500 words - 1”, n.d.)
Labor Laws and Unions Essay Example | Topics and Well Written Essays - 500 words - 1. Retrieved from https://studentshare.org/management/1588881-labor-laws-and-unions

CHECK THESE SAMPLES OF Labor Laws and Unions

...? Unions and labor relations Unions And Labor Relations Trade unions are organizations to protect the interests of the working The ultimate aim of all the employers is to maximize their profits. They normally do it at the expense of the employees. In the absence of any organized labor union, employee exploitation may takes place freely within the boundaries of an organization. In short trade unions increase the bargaining power of the employees. “In collective bargaining, the union represents its members in negotiations rather than having each worker negotiates individually with the employer” (Labor Unions in Our Economy, n. d, p.185). In other words trade unions always work for the betterment of the whole employees rather than... the...
3 Pages(750 words)Research Paper

Concept of supply and demand; of antitrust laws and of labor unions

...and that no single company or individual gains an upper hand in business dealings unlawfully. Hence Antitrust laws have become a boon for American citizens since the consumers get adequate protection from being exploited. (www.wisegeek.com ) c) Concept of Labor Unions: It is an organization that is created by the workers of any company or business establishment, with the sole aim of getting satisfactory wages and favorable type of working environment, through the bargaining strength of its members. In America most labor unions help in the process of negotiations with the employers. It has been seen that, most of these are business...
2 Pages(500 words)Essay

...? Labor Laws and Unions Labour Laws and Unions American Telephone & Telegraph (AT & T) Company; established in 1885 and offers quality and reliable communication services. It is a worldwide leader in local, long distance, internet, and infringement transaction-based voice and data services. Following the invention of the telephone by Alexander Graham Bell in 1876, Graham and his financial backers formed the Bell Telephone Company the following year. AT&T was later incorporated as a subsidiary of Bell in 1885 in order to build and operate the first long-distance telephone network. AT&T purchased Bell’s assets and became the mother company of Bell in 1899....
3 Pages(750 words)Essay

...should the fired employee decide to take legal action. 3. Foundation of Employer – Employee Relationship One main function of labor laws is to serve as platform whereby a working relationship can be developed between the employer and employee that will lead to a stable working environment. The foundation of this relationship is based in labor laws due to the fact the establishment of these rules and regulations has ensured that both sides are aware of the boundaries that have been put in place. These boundaries serve as guidelines on how both parties are expected to act towards each other. A good example of this is the inclusion of Collective labor...
4 Pages(1000 words)Essay

...The formation of labor unions is a great progress of our civilization. It is well known that there were not any labor unions neither in the epoch of slavery or in the epoch of feudalism. They became a very important public means of regulation of social relationship, and marked the progress of mankind. During last decades the American labor unions have been confronted with a lot of serious problems, which have led to substantial decline of their influence and importance. In the middle of the last century labor unions included 35 percent of the working population. Moreover there was a special...
3 Pages(750 words)Essay

...Task Labor Laws and Unions The International Workers Organization seeks to fight for the monetary and political interests of the workers and ultimately abolishing capitalism through the foundation of economic communities and governmental organs administered by the workers. This organization represents more than a million people globally. The massive repression accelerated the formation of this organization. It is firmly decisive of prearranged religion and functions as a secular organization, though faith or no presence of it does not restrict entry. The member groups have the capability of participating in and largely benefit from the worldwide community that this organization...
2 Pages(500 words)Essay

... points out the stiff competition that unions face in the global market due to their notion to promote fairness. In order for unions to fit into the global market, union laws should discourage the notion of fairness and focus on the changes in market forces. Rust observes that creation of unions that are able to adapt to external forces is possible if unions give in to powers such as exclusive representation, and mandatory good faith bargaining. Rust provides an example that NLRA, which has the support of many employees, can represent all employees in a bargaining unit in spite of their support of the union. This illustrates exclusive representation. On the other hand, mandatory good faith bargaining requires employees to meet... Labour...
2 Pages(500 words)Assignment

...Human Resources Labor Laws There are various labor Acts that have been passed and enacted to protect both the employer and employees in an employer-employee relationship. In the United States, such labor Acts are Railway Labor Act, Norris-La Guardia Act, Wagner Act, Taft-Hartley Act, and Landrum-Griffin act. The railway Labor Act helps to create and maintain a healthy relationship between carriers and their employees in the rail industry. The Norris-La Guardia Act was passed to put a stop to ant-labor injunction and give employees freedom to hold nonviolent labor disputes. The Wagner Act allowed workers...
4 Pages(1000 words)Coursework

Effectiveness of Labor Unions and Laws

...﻿Labor Relations - Labor UnionsLabor relations are regarded as the study of relationships which exists in the workplace among employees as well as between workers and employers in different organizations. It represents all the employers as well as employees, the government of the country, and also other types of organizations and institutions in society. The concept of labor relations incorporates the study of literature on personnel management, the study of collective bargaining, different aspects of labor laws, and also social insurance systems. Therefore, the process of understanding of all sub-fields related to...
15 Pages(3750 words)Research Paper
sponsored ads
Save Your Time for More Important Things
Let us write or edit the essay on your topic "Labor Laws and Unions" with a personal 20% discount.
GRAB THE BEST PAPER

Let us find you another Essay on topic Labor Laws and Unions for FREE!