Comments (0)
Add to wishlistDelete from wishlist
Cite this document
Summary
The author of the paper states that Wal-Mart faces the biggest international challenge in having to translate its USP to other countries. Not all markets are similar to those of the US and the eastern market and customer psyche differ greatly from that of the US.   …
Download full paperFile format: .doc, available for editing
HIDE THIS PAPERGRAB THE BEST PAPER94.6% of users find it useful 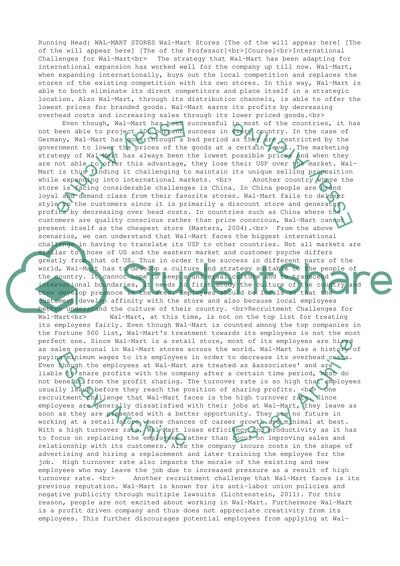 Extract of sample "International and Recruitment Challenges for Wal-Mart"

Running Head: WAL-MART STORES Wal-Mart Stores [The of the will appear here] [The of the will appear here] [The of the Professor]
[Course]
International Challenges for Wal-Mart
The strategy that Wal-Mart has been adapting for international expansion has worked well for the company up till now. Wal-Mart, when expanding internationally, buys out the local competition and replaces the stores of the existing competition with its own stores. In this way, Wal-Mart is able to both eliminate its direct competitors and place itself in a strategic location. Also Wal-Mart, through its distribution channels, is able to offer the lowest prices for branded goods. Wal-Mart earns its profits by decreasing overhead costs and increasing sales through its lower priced goods.
Even though, Wal-Mart has been successful in most of the countries, it has not been able to project 100 percent success in every country. In the case of Germany, Wal-Mart has gone through a bad period as they are restricted by the government to lower the prices of the goods at a certain level. The marketing strategy of Wal-Mart has always been the lowest possible prices and when they are not able to offer this advantage, they lose their USP over the market. Wal-Mart is thus finding it challenging to maintain its unique selling proposition while expanding into international markets.
Another country where the store is facing considerable challenges is China. In China people are brand loyal and demand class from their favorite stores. Wal-Mart fails to deliver style to the customers since it is primarily a discount store and generates profits by decreasing over head costs. In countries such as China where the customers are quality conscious rather than price conscious, Wal-Mart cannot present itself as the cheapest store (Masters, 2004).
From the above scenarios, we can understand that Wal-Mart faces the biggest international challenge in having to translate its USP to other countries. Not all markets are similar to those of US and the eastern market and customer psyche differs greatly from that of US. Thus in order to be success in different parts of the world, Wal-Mart has to develop a culture and strategy suitable to the people of the country. It cannot hope to keep a universal culture and to transcend international boundaries, it needs to first study the culture of the country and then develop presence in the area. Employees should be locals so that the customers develop affinity with the store and also because local employees better understand the culture of their country.
Recruitment Challenges for Wal-Mart
Wal-Mart, at this time, is not on the top list for treating its employees fairly. Even though Wal-Mart is counted among the top companies in the Fortune 500 list, Wal-Mart’s treatment towards its employees is not the most perfect one. Since Wal-Mart is a retail store, most of its employees are hired as sales personal in Wal-Mart stores across the world. Wal-Mart has a history of paying minimum wages to its employees in order to decrease its overhead costs. Even though the employees at Wal-Mart are treated as ‘associates’ and are liable to share profits with the company after a certain time period, most do not benefit from the profit sharing. The turnover rate is so high that employees usually leave before they reach the position of sharing profits.
One recruitment challenge that Wal-Mart faces is the high turnover rate. Since employees are generally dissatisfied with their jobs at Wal-Mart, they leave as soon as they are presented with a better opportunity. They see no future in working at a retail store where chances of career growth are minimal at best. With a high turnover rate, Wal-Mart loses efficiency and productivity as it has to focus on replacing the employees rather than focus on improving sales and relationship with its customers. Also the company incurs costs in the shape of advertising and hiring a replacement and later training the employee for the job. High turnover rate also impacts the morale of the existing and new employees who may leave the job due to increased pressure as a result of high turnover rate.
Another recruitment challenge that Wal-Mart faces is its previous reputation. Wal-Mart is known for its anti-labor union policies and negative publicity through multiple lawsuits (Lichtenstein, 2011). For this reason, people are not excited about working in Wal-Mart. Furthermore Wal-Mart is a profit driven company and thus does not appreciate creativity from its employees. This further discourages potential employees from applying at Wal-Mart. Employees do not wish to be hired in an organization that does not appreciate their skills and further does not allow any room for career growth (Hamstra, 2011).
References
Hamstra, M. (2011) Wal-Mart Faces Recruiting Challenges, Supermarket News, Retrieved from
http://supermarketnews.com/retail_financial/walmart_recruiting_0627/
Lichtenstein, N. (2011) Wal-Mart’s Authoritarian Culture, California: NY Times, Retrieved from
http://www.nytimes.com/2011/06/22/opinion/22Lichtenstein.html.
Masters, G. (2004) Wal-Marts Global Challenge, Retail Merchandiser. Lexis-Nexis Academic Read More
Share:
Tags
Cite this document
(“Case 4 Wal-Mart stores- essay- 2 1/2 pages Essay”, n.d.)
Case 4 Wal-Mart stores- essay- 2 1/2 pages Essay. Retrieved from https://studentshare.org/management/1586877-case-4-wal-mart-stores-essay-2-12-pages

CHECK THESE SAMPLES OF International and Recruitment Challenges for Wal-Mart

...to work with the manager and specify the most relevant data needed. The information generated should help the manager in making better decisions and this difference should be measurable. The definition of MIS implies that it is not worth building an MIS system unless the managers are willing to use it. MIS has never been rightly used as a control system for better decisions. 3. Background – Wal-mart Wal-mart plays a significant role in the US economy. Founded by Sam Walton in 1962, it has grown from a single store to a mammoth international corporation. As of 2007 Wal-mart operated more than 3400 stores and is the...
11 Pages(2750 words)Assignment

...? International Business Strategy: Wal-Mart BY YOU YOUR SCHOOL INFO HERE HERE International Business Strategy: Wal-Mart Attractiveness of Discount Retail in the 1950s Started in approximately 1897, the era of the discount retailer began, with major discount retailers such as Woolworth’s maintaining market dominance on commercial Main Street. From the turn of the century until post-World War II, it was common practice for retailers to deny removal of merchandise from retailer shelves, instead providing in-house talent to assist customers directly at the store counter (Hesterly 2008). The expense of providing top quality, customised...
14 Pages(3500 words)Essay

...worldwide through the Wal-Mart Stores, Sam's Club franchises, and International. Wal-Mart offers everything starting from necessities such as food, clothing, health, beauty and household items, cleaning products, electronics and others. Wal-Mart currently operates almost 4,000 stores in the U.S., and more than 2,700 stores outside the United States. Wal-Mart's thrust has always been to offer the widest variety of items available at very low prices. Financial Health Wal-Mart trades under the stock symbol WMT at the New York Stock Exchange. As of...
4 Pages(1000 words)Case Study

...provides equal power to industrialists and government over the market. Like in the case of US and UK, Japan maintains a free market system so as to encourage national as well as international traders. Japan’s industrialized economy is the third largest in the world. According to Daniels, Radebaugh, Sullivan, and Salwan (2011, p. 144), different nations follow different market systems and regulations. This varied market structures raise many challenges to Wal-Mart Stores because the organization is forced to restructure its marketing policies in accordance with the trade laws of the nations in which it operates. 3. The sources of political risk for the countries in which...
4 Pages(1000 words)Research Paper

... Walmart Financial Analysis Social Responsibility. There are two perspectives as to whom organizations are socially responsible: the shareholder model and the stakeholder model. a. Which model to do you think applies to Walmart? Explain why. I think Walmart uses both models because it has a diversified range of stores across the globe that are under a team of managers, and utilizes all opportunities in the market. b According to the model you subscribed to Walmart under 4a, who do you think gains the most from Wal-Marts business model? Again, explain why. Opening of new stores, adoption of new technological measures, using a combination of technologies to enhance performance, increasing product volume and store manager incentive... ...
1 Pages(250 words)Assignment

...﻿Wal-Mart – Global International Markets Introduction The international economy during the last fifty years has developed beyond the bounds. Business firms from various countries around the globe have successfully accomplished their goals through international and multinational strategies. The only tough time face by the firms was during the 1990s when the business environment had to meet a number of challenges to attain an established way of doing business. The significance of international marketing is realized by all the firms and they try to take advantage of the upshots of the global market. According to Wensley,...
10 Pages(2500 words)Case Study
sponsored ads
Save Your Time for More Important Things
Let us write or edit the term paper on your topic "International and Recruitment Challenges for Wal-Mart" with a personal 20% discount.
GRAB THE BEST PAPER

Let us find you another Term Paper on topic International and Recruitment Challenges for Wal-Mart for FREE!