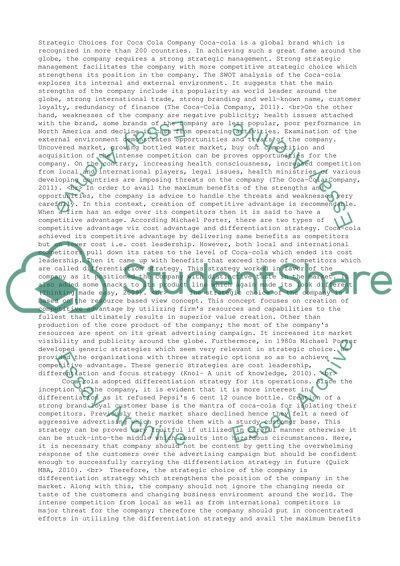 Strategic Choices for Coca Cola Company Coca-cola is a global brand which is recognized in more than 200 countries. In achieving such s great fame around the globe, the company requires a strong strategic management. Strong strategic management facilitates the company with more competitive strategic choice which strengthens its position in the company. The SWOT analysis of the Coca-cola explores its internal and external environment. It suggests that the main strengths of the company include its popularity as world leader around the globe, strong international trade, strong branding and well-known name, customer loyalty, redundancy of finance (The Coca-Cola Company, 2011).
On the other hand, weaknesses of the company are negative publicity; health issues attached with the brand, some brands of the company are less popular, poor performance in North America and decline in cash from operating activities. Examination of the external environment demonstrates opportunities and treats of the company. Uncovered market, growing bottled water market, buy out competition and acquisition of the intense competition can be proves opportunities for the company. On the contrary, increasing health consciousness, increased competition from local and international players, legal issues, health ministries of various developing countries are imposing threats on the company (The Coca-Cola Company, 2011).
In order to avail the maximum benefits of the strengths and opportunities, the company is advice to handle the threats and weaknesses very carefully. In this context, creation of competitive advantage is recommendable. When a firm has an edge over its competitors then it is said to have a competitive advantage. According Michael Porter, there are two types of competitive advantage viz cost advantage and differentiation strategy. Coca-cola achieved its competitive advantage by delivering same benefits as competitors but on lower cost i.e. cost leadership. However, both local and international competitors pull down its rates to the level of Coca-cola which ended its cost leadership. Then it came up with benefits that exceed those of competitors which are called differentiation strategy. This strategy worked in favor of the company as it positioned the company with distinctive taste in the market. It also added some snacks to its product line which again made its look different (Thinking made easy, 2009).
The strategic choice of the company is based on the resource based view concept. This concept focuses on creation of competitive advantage by utilizing firm’s resources and capabilities to the fullest that ultimately results in superior value creation. Other than production of the core product of the company; the most of the company’s resources are spent on its great advertising campaign. It increased its market visibility and publicity around the globe. Furthermore, in 1980s Michael Porter developed generic strategies which seem very relevant in strategic choice. He provided the organizations with three strategic options so as to achieve competitive advantage. These generic strategies are cost leadership, differentiation and focus strategy (Knol- A unit of knowledge, 2010).
Coca-cola adopted differentiation strategy for its operations. Since the inception of the company, it is evident that it is more interest in differentiation as it refused Pepsi’s 6 cent 12 ounce bottle. Creation of a strong brand loyal customer base is the mantra of coca-cola for isolating their competitors. Previously their market share declined hence they felt a need of aggressive advertising which provide them with a sturdy customer base. This strategy can be proved very fruitful if utilized in careful manner otherwise it can be stuck-into-the middle which results into hazardous circumstances. Here, it is necessary that company should not be content by getting the overwhelming response of the customers over the advertising campaign but should be confident enough to successfully carrying the differentiation strategy in future (Quick MBA, 2010).
Therefore, the strategic choice of the company is differentiation strategy which strengthens the position of the company in the market. Along with this, the company should not ignore the changing needs or taste of the customers and changing business environment around the world. The intense competition from local as well as from international competitors is major threat for the company; therefore the company should put in concentrated efforts in utilizing the differentiation strategy and avail the maximum benefits (Tripod, 2011).
References
The Coca-Cola Company. (2011). Addressing your questions. Retrieved Dec 24 2011, from http://www.thecoca-colacompany.com/citizenship/challenges_opportunities.html
The Coca-Cola Company. (2011). Our strategy. Retrieved Dec 24 2011, from http://www.thecoca-colacompany.com/careers/our_strategy.html
Thinking made easy. (2009). Strategic analysis: Coca-cola. Retrieved Dec 24 2011, from http://ivythesis.typepad.com/term_paper_topics/2009/08/strategic-analysis-coca-cola.html
Knol- A unit of knowledge. (2010). The coca-cola company. Retrieved Dec 24 2011, from http://knol.google.com/k/the-coca-cola-company#
Quick MBA. (2010). Competitive advantage. Retrieved Dec 24 2011, from http://www.quickmba.com/strategy/competitive-advantage/
Tripod. (2011). Coca-cola: SWOT analysis. Retrieved Dec 24 2011, from http://coca-cola-remodel.tripod.com/id21.html
Quick MBA. (2010). Porter’s generic strategy. Retrieved Dec 24 2011, from http://www.quickmba.com/strategy/generic.shtml Read More
Share:
Tags
Cite this document
(“Strategic Choices for Coca Cola Company Research Paper”, n.d.)
Retrieved from https://studentshare.org/management/1586821-strategic-choices-for-coca-cola-company

CHECK THESE SAMPLES OF Strategic Choices for Coca Cola Company

...Coca-Cola Company Introduction The Coca-Cola Company is considered the globe’s largest drinks selling business, occupying over half of the international marketplace in carbonated soft beverages in addition to a considerable portion of the noncarbonated section. It possesses four of the globe's five best-purchased soft drinks. Its main brand is certainly Coca-Cola itself, which is the globe's best-recognized and most precious brand. Nevertheless, the business sells roughly 500 additional beverage products varying from deviations like Diet Coke and brother products, for example, Fanta and Sprite to an...
8 Pages(2000 words)Essay

...Business Strategy March 24, The Strategic Analysis of the Coca Cola Company This paper will provide the analysis of mission, vision, objectives of the coca cola company. The analysis will be on these points (1) Sustainability and road map to success, (2) Strategy remain same with the changes in technology, (3) Continuity in strategic direction and continuous improvement (4) The myth of inflection points (5) Great strategies are not complex (6) Chief strategist has to be the leader. The paper will also provide conclusion in which the brief analysis of the strategies of The Coca...
3 Pages(750 words)Coursework

... Coca-Cola Company is a company that produces and sells soft drinks to its s. It's the largest manufacturer and marketer of the non-alcoholic drinks concentrates and syrups in the world. Its headquarters are in Atlanta Georgia. The Chief Executive Officer is known as Mr. Muhtar Kent. The stocks of the company are listed in the New York Stock Exchange .The Company is rated as one of the largest companies in United States of America. It has been in operation for the last 130 years producing over 400 different kinds of brands for its customers. The products range from diet, caffeine free to the vanilla -flavored type of products. The mission of the company has been that of refreshing the body, mind and spirit; to inspire the moments... of...
10 Pages(2500 words)Essay

...Strategic Management - Environmental Analysis Coca Cola Macro Environmental Analysis - PESTLE "The Coca-Cola Company is the world's biggest drinkscompany, controlling more than half the global market in carbonated soft drinks as well as a substantial chunk of the non-carbonated segment." (adbrands.net) Through PESTLE analysis the impact of changes taking place at a macro economic level on any market/industry caused by Political, Economical, Social, Technological, and Legal and Environmental factor can be reviewed. Political Analysis Since non-alcoholic beverages fall within the food category under the FDA, the government plays a...
3 Pages(750 words)Essay

...The Coca Cola Company Registration Number Module Number and of Assignment INTRODUCTION The Coca-Cola Company has been operating internationally for over a century and has seen rapid growth in its business since it started. The company has introduced many innovative carbonated and non-fizzy drinks to add to their numerous products, which have been well received by consumers all over the world, including the Vanilla Coke and Coke Zero. The company has over 300 bottling partners globally that are responsible for its products and distributions and takes pride in playing an environmentally responsible role....
6 Pages(1500 words)Research Paper

...Strategic Marketing Plan Coca-Cola Company- Minute Maid Executive Summary Minute Made is a brand of Coca-Cola Company, which is the largest manufacturer of beverages in the world. Minute Made specializes in the manufacturing, marketing and distribution of fruit juices, teas and other drinks. This document serves as a marketing plan for Minute Maid line pf products for the next 12 months. The paper analyses the situation to uncover key considerations and then further establishes corporate and marketing objective and suggests a plan for achieving goals. Table of Contents Table of Contents 3 1. Introduction 4 1.1...
27 Pages(6750 words)Assignment

...﻿The Coca Cola Company 1 INTRODUCTION The Coca-Cola Company has been operating internationally for over a century and has seen rapid growth in its business since it started. The company has introduced many innovative carbonated and non-fizzy drinks to add to their numerous products, which have been well received by consumers all over the world, including the Vanilla Coke and Coke Zero. The company has over 300 bottling partners globally that are responsible for its products and distributions and takes pride in playing an environmentally responsible role. With the current global economic downturn, we...
5 Pages(1250 words)Research Paper

...Running head: Strategic Management: Strategic Choices Strategic Management: Strategic Choices 9th January 2012 Abstract Strategic choices that Coca-Cola Company has recently adopted include appropriate branding as well as effective pricing of its products. Through production of wide range of products that include orangeades, coffee, tea and fruitopia beverage among others, the company has effectively met the needs of its customers across the world. In the same way, Coca-Cola ensures that the prices of its...
2 Pages(500 words)Essay

...beverage. The Coca Cola syrup and extract was labeled as copyright under John Pemberton. In 1889 the formula of Coca Cola and the brand was bought by Asa Griggs Candler. He started the company Coca Cola in 1892. The company’s Spencerian script and its trademark were registered in 1892 with the Patent office of U.S. In the company’s second annual meeting the investors received their first dividend. The annual report of the company in 1895 declared that Coca Cola is sold and drunk in all the states of US. Business positioning The...
13 Pages(3250 words)Essay
sponsored ads
Save Your Time for More Important Things
Let us write or edit the research paper on your topic "Strategic Choices for Coca Cola Company" with a personal 20% discount.
GRAB THE BEST PAPER

Let us find you another Research Paper on topic Strategic Choices for Coca Cola Company for FREE!