Comments (0)
Add to wishlistDelete from wishlist
Cite this document
Summary
United Airlines is one of largest companies in the airline industry. Recently the firm encountered a problem with a young musician which escalated because the company did not satisfy the customer’s needs. The bad press the company received hurt the public image of the company which devalued the price of the company’s common stocks. …
Download full paperFile format: .doc, available for editing
HIDE THIS PAPERGRAB THE BEST PAPER91.8% of users find it useful 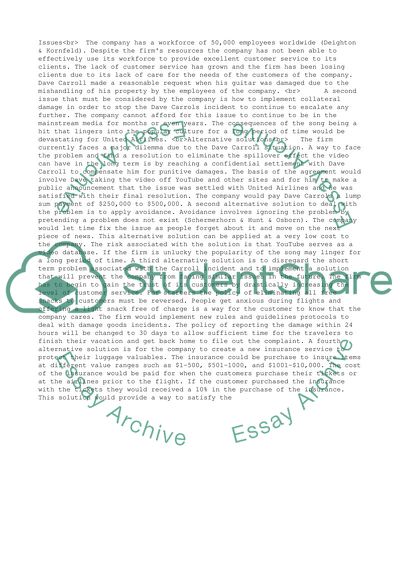 Download file to see previous pages Issues
The company has a workforce of 50,000 employees worldwide (Deighton & Kornfeld). Despite the firm’s resources the company has not been able to effectively use its workforce to provide excellent customer service to its clients. The lack of customer service has grown and the firm has been losing clients due to its lack of care for the needs of the customers of the company. Dave Carroll made a reasonable request when his guitar was damaged due to the mishandling of his property by the employees of the company.
A second issue that must be considered by the company is how to implement collateral damage in order to stop the Dave Carrols incident to continue to escalate any further. The company cannot afford for this issue to continue to be in the mainstream media for months or even years. The consequences of the song being a hit that lingers into the popular culture for a long period of time would be devastating for United Airlines.
Alternative solutions
The firm currently faces a major dilemma due to the Dave Carroll situation. A way to face the problem and find a resolution to eliminate the spillover effect the video can have in the long term is by reaching a confidential settlement with Dave Carroll to compensate him for punitive damages. The basis of the agreement would involve Dave taking the video off YouTube and other sites and for him to make a public announcement that the issue was settled with United Airlines and he was satisfied with their final resolution. The company would pay Dave Carrols a lump sum payment of $250,000 to $500,000. A second alternative solution to deal with the problem is to apply avoidance. Avoidance involves ignoring the problem by pretending a problem does not exist (Schermerhorn & Hunt & Osborn). The company would let time fix the issue as people forget about it and move on the next piece of news. This alternative solution can be applied at a very low cost to the company. The risk associated with the solution is that YouTube serves as a video database. If the firm is unlucky the popularity of the song may linger for a long period of time. A third alternative solution is to disregard the short term problem associated with the Carroll incident and to implement a solution that will prevent the company from facing similar issues in the future. The firm has to begin to gain the trust of its customers by drastically increasing the level of customer service. For starters the policy of eliminating all free snacks to customers must be reversed. People get anxious during flights and offering a light snack free of charge is a way for the customer to know that the company cares. The firm would implement new rules and guidelines protocols to deal with damage goods incidents. The policy of reporting the damage within 24 hours will be changed to 30 days to allow sufficient time for the travelers to finish their vacation and get back home to file out the complaint. A fourth alternative solution is for the company to create a new insurance service to protect their luggage valuables. The insurance could be purchase to insure items at different value ranges such as $1-500, $501-1000, and $1001-$10,000. The cost of the insurance would be paid for when the customers purchase their tickets or at the airlines prior to the flight. If the customer purchased the insurance with the tickets they would received a 10% in the purchase of the insurance. This solution would provide a way to satisfy the ...Download file to see next pagesRead More
Share:
Tags
Cite this document
(“United Airlines Breaks Guitars Case Study Example | Topics and Well Written Essays - 1000 words”, n.d.)
Retrieved from https://studentshare.org/management/1417463-united-airlines-breaks-guitars-case

Despite the few negative incidences of crime committed by the United States of America’s security troops that were deployed in the country on a peacekeeping mission.
Since the war in Korea began in the early nineteen fifties, the United States has stationed tens of thousands of soldiers, mostly the United States’ army personnel, in South Korea. Through the assistance of the South Korean troops and other neighboring governments, the American troops have been able to guard and offer maximum security to South Korean people. In line with the argument of James (2003), ‘most of the military bases in South Korea are relatively isolated’ thus the need for much attention from the troops so as to ensure maximum...
10 Pages(2500 words)Assignment
sponsored ads
Save Your Time for More Important Things
Let us write or edit the case study on your topic "United Airlines Breaks Guitars Case" with a personal 20% discount.
GRAB THE BEST PAPER

Let us find you another Case Study on topic United Airlines Breaks Guitars Case for FREE!