Comments (0)
Add to wishlistDelete from wishlist
Cite this document
Summary
Employment Law Name XXXXXXXXXX Professor XXXXXXXXX Institution XXXXXXXXX Course XXXXXXXXXXX Date XXXXXXXXXXX Employment Law Employment law basically refers to the accepted manner in which every single form of employment is governed by. In some countries, the law requires that any contract of service offered or yet to be offered, that runs up to an aggregate of three months or more, must be put down in written form…
Download full paperFile format: .doc, available for editing
HIDE THIS PAPERGRAB THE BEST PAPER96.8% of users find it useful 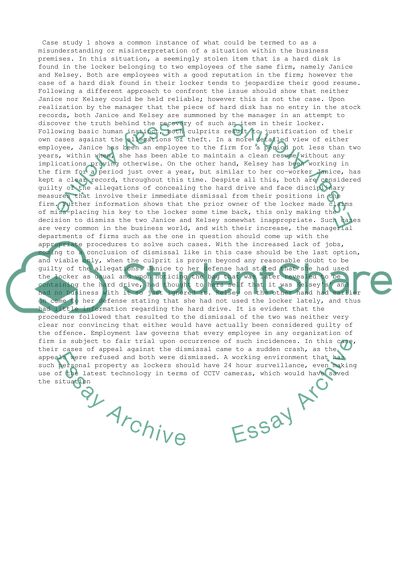 Download file to see previous pages Case study 1 shows a common instance of what could be termed to as a misunderstanding or misinterpretation of a situation within the business premises. In this situation, a seemingly stolen item that is a hard disk is found in the locker belonging to two employees of the same firm, namely Janice and Kelsey. Both are employees with a good reputation in the firm; however the case of a hard disk found in their locker tends to jeopardize their good resume. Following a different approach to confront the issue should show that neither Janice nor Kelsey could be held reliable; however this is not the case. Upon realization by the manager that the piece of hard disk has no entry in the stock records, both Janice and Kelsey are summoned by the manager in an attempt to discover the truth behind the recovery of such an item in their locker. Following basic human instinct, both culprits result to justification of their own cases against the allegations of theft. In a more detailed view of either employee, Janice has been an employee to the firm for a period not less than two years, within when, she has been able to maintain a clean resume without any implications proving otherwise. On the other hand, Kelsey has been working in the firm for a period just over a year, but similar to her co-worker Janice, has kept a clear record, throughout this time. Despite all this, both are considered guilty of the allegations of concealing the hard drive and face disciplinary measures that involve their immediate dismissal from their positions in the firm. Further information shows that the prior owner of the locker made claims of miss-placing his key to the locker some time back, this only making the decision to dismiss the two Janice and Kelsey somewhat inappropriate. Such cases are very common in the business world, and with their increase, the managerial departments of firms such as the one in question should come up with the appropriate procedures to solve such cases. With the increased lack of jobs, coming to a conclusion of dismissal like in this case should be the last option, and viable only, when the culprit is proven beyond any reasonable doubt to be guilty of the allegations. Janice to her defense had stated that she had used the locker as usual and upon noticing the bag that was later revealed to be containing the hard drive, had thought to hers self that it was Kelsey’s’ and had no business with it so just ignored it. Kelsey on the other hand had earlier on come to her defense stating that she had not used the locker lately, and thus had little information regarding the hard drive. It is evident that the procedure followed that resulted to the dismissal of the two was neither very clear nor convincing that either would have actually been considered guilty of the offence. Employment law governs that every employee in any organization of firm is subject to fair trial upon occurrence of such incidences. In this case, their cases of appeal against the dismissal came to a sudden crash, as the appeals were refused and both were dismissed. A working environment that has such personal property as lockers should have 24 hour surveillance, even making use of the latest technology in terms of CCTV cameras, which would have saved the situation ...Download file to see next pagesRead More
Share:
Tags
Cite this document
(“Employment law Essay Example | Topics and Well Written Essays - 3000 words”, n.d.)
Employment law Essay Example | Topics and Well Written Essays - 3000 words. Retrieved from https://studentshare.org/management/1403334-employment-law
(Employment Law Essay Example | Topics and Well Written Essays - 3000 Words)
Employment Law Essay Example | Topics and Well Written Essays - 3000 Words. https://studentshare.org/management/1403334-employment-law.
“Employment Law Essay Example | Topics and Well Written Essays - 3000 Words”, n.d. https://studentshare.org/management/1403334-employment-law.
Comments (0)
Click to create a comment or rate a document

In th...
8 Pages(2000 words)Case Study
sponsored ads
Save Your Time for More Important Things
Let us write or edit the essay on your topic "Employment law" with a personal 20% discount.
GRAB THE BEST PAPER