Comments (0)
Add to wishlistDelete from wishlist
Cite this document
Summary
The paper "Oil in the Middle East is a Curse more than a Blessing" discuses budget-forming industry, whose revenues subsidize all other industries, and ensure the prosperity of Iran. However, it is time to think about how the state budget will be filled when the reserves of black gold run out…
Download full paperFile format: .doc, available for editing
HIDE THIS PAPERGRAB THE BEST PAPER97.7% of users find it useful 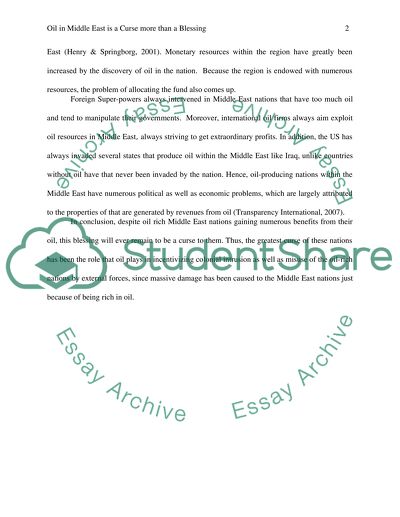 Oil in Middle East is a Curse more than a Blessing Middle East is in possession of more than 66 percent of the global oil reserve and gains millions of dollars daily from exporting oil (Karl, 1997). For instance, the Iranian economy majorly depends on the wealth that is generated by oil. It should be noted that oil is the major source of economic development, technological development, as well as socio-cultural development. Moreover, Iran is number four among the global producers of oil, and, besides, it is a huge exporter of petroleum. These two factors have made it to have huge cultural, geopolitical, as well as economic power. Although the industry does not own provide a very huge share of the nation’s national product, it is greatly contributes to the budget of the government, and besides, it is the factor behind the huge economic growth of Iran (Karl, 1997).
The export of oil is the main source of direct revenue for the Middle East nations governments taking into account their lands are desert. Moreover, it also provides indirect revenue through the taxes that are levied on imports as well as several other activities that are financed by the money from oil and besides, foreign exchange be also earned. All these are beneficial as they maintain other sectors within the economy of the Middle East countries (Karl, 1997). In addition, agriculture is also dependent on imports that are financed by oil; hence, Middle East nations’ food supply is alleged to rely on imports. However, food supply also depends on the annual rainfall as well as several other conditions.
Despite the number of benefits brought about by oil, in Iran, for instance, the nationals of the country have lived to be haunted by its discovery. Thus, the presence of oil reserves in the Middle East affects the states economically, politically, as well as socio-culturally but the sector, which is highly affected, is the nations’ political economy. Insecurity is also brought about by the presence of oil; similarly, oil has made Middle East to be vulnerable to interferences from the foreign nations, leading to the damage of the historical development of the nations in Middle East (Henry & Springborg, 2001). Monetary resources within the region have greatly been increased by the discovery of oil in the nation. Because the region is endowed with numerous resources, the problem of allocating the fund also comes up.
Foreign Super-powers always intervened in Middle East nations that have too much oil and tend to manipulate their governments. Moreover, international oil firms always aim exploit oil resources in Middle East, always striving to get extraordinary profits. In addition, the US has always invaded several states that produce oil within the Middle East like Iraq, unlike countries without oil have that never been invaded by the nation. Hence, oil-producing nations within the Middle East have numerous political as well as economic problems, which are largely attributed to the properties of that are generated by revenues from oil (Transparency International, 2007).
In conclusion, despite oil rich Middle East nations gaining numerous benefits from their oil, this blessing will ever remain to be a curse to them. Thus, the greatest curse of these nations has been the role that oil plays in incentivizing colonial intrusion as well as misuse of the oil-rich nations by external forces, since massive damage has been caused to the Middle East nations just because of being rich in oil.
References
Henry, C.M. and Springborg, R. (2001). Globalization and the Politics of Development in the
Middle East.Cambridge: Cambridge University Press.
Karl, T.L. (1997). The Paradox of Plenty: Oil Booms and Petro-States. Berkeley: University of
California Press.
Transparency International (2007). Global Corruption Report 2007.New York: Cambridge
University, Press. Read More
Share:
Tags
Cite this document
(Oil in the Middle East is a Curse More than a Blessing Term Paper, n.d.)
Oil in the Middle East is a Curse More than a Blessing Term Paper. Retrieved from https://studentshare.org/macro-microeconomics/1599618-critical-thinking-essay-2

“Oil in the Middle East Is a Curse More Than a Blessing Term Paper”, n.d. https://studentshare.org/macro-microeconomics/1599618-critical-thinking-essay-2.
Comments (0)
Click to create a comment or rate a document

Investigating the Viscosity of Vegetable Oil

Vegetable oils are essentially esters of glycerol and fatty acids derived from plant and animal sources. Due to the difference in the composition of fatty acids in different types of oils, there are differences in their viscosities also. Most vegetable oils are liquid at ambient temperatures; and are also more viscous than aqueous solutions (Lewis: 132).
In several food processing operations, it is essential to determine the viscosity of the fluid being processed so that the most suitable equipment can be selected. The viscosity may change considerably during some operations such as heating, cooling, homogenization, concentration and industrial fermentations by molds. When planning these processes, these viscosity changes nee...
11 Pages(2750 words)Article

It was the nerve raking reality of the Holocaust that moved him to question his religious and ethnic identity5. As a result, he got immensely interested in Jewish tradition and history. According to Malamud, “I was concerned with what Jews stood for, with their getting down to the bare bones of things. I was concerned with their ethnicity- how Jews felt they had to live in order to go on living.”6
Most of the works of literature drafted by Malamud exhibit a strange mix of truth and fantasy and have often been allocated to the ambit of “parables, myths, and allegories.”7 There is no denying the fact that Malamud’s stories and novels have a clear cut moral objective. In fact, Malamud happened to be...
10 Pages(2500 words)Assignment

... for School Mathematics, the National Council of Teachers of Mathematics stated, "Technology is essential in teaching and learning mathematics; it influences the mathematics that is taught and enhances students learning" (NCTM, 2004). Using computers in the teaching of Mathematics has proven to be effective in improving students’ learning of Mathematics (see for example Büyükköro­glu, 2004). Therefore, using computers to teach Mathematics, at least in some respects, is better than traditional methods. There are three main reasons for this: (1) It makes the teachers and students feel more confident, (2) It enhances motivation and stimulates greater interest in Mathematics classes, and (3) It creates an overall better environment for learning...
7 Pages(1750 words)Case Study

Natural Resources: Curse or a Blessing

The abundance of natural resources in any country provides that country with an edge over other countries in terms of power and economy in that other countries have little choice but to develop good relations with the resource-rich country so that resources can be purchased and availed as required. However, in addition, to be abundant in natural resources, it is equally important for a resource-rich country to be equipped with all the technology that is required to extract them from Earth and convert them into a usable form for both self and other countries who are willing to pay a heavy price in return of export of resources.

Despite the undeniable benefits of the abundance of natural resources in favor of land, there...
6 Pages(1500 words)Coursework
sponsored ads
Save Your Time for More Important Things
Let us write or edit the term paper on your topic "Oil in the Middle East is a Curse More than a Blessing" with a personal 20% discount.
GRAB THE BEST PAPER

Let us find you another Term Paper on topic Oil in the Middle East is a Curse More than a Blessing for FREE!