Comments (0)
Add to wishlistDelete from wishlist
Cite this document
Summary
Fiscal policy is a government’s tool to exercise control over its expenditures and the revenues whereas monetary policy deals with the strategies made by the central bank in the form of open market operations and the change in the interest rates. There are mainly two kinds of…
Download full paperFile format: .doc, available for editing
HIDE THIS PAPERGRAB THE BEST PAPER94.5% of users find it useful 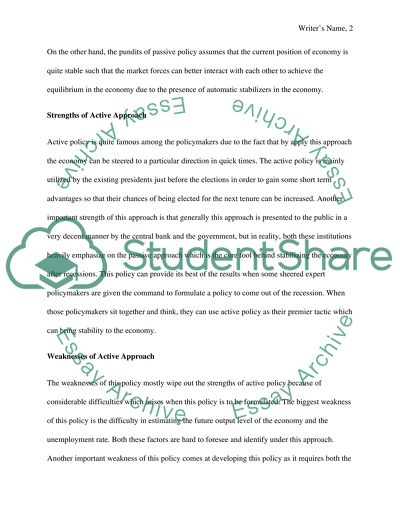 28th March, Active Fiscal and Monetary Policy Fiscal policy is a government’s tool to exercise control over its expenditures and the revenues whereas monetary policy deals with the strategies made by the central bank in the form of open market operations and the change in the interest rates. There are mainly two kinds of policies which are used by the government and the central bank jointly which are referred to as active and passive policy.
Active Policy
At the times of recessions or the times when economy is at its struggling stage, active policy emphasizes on a view that the current position of the economy is quite unstable and the existing fluctuations occurring in the society are due to the participation of private sector. Therefore, it would be government who has to come forward and prepare a discretional fiscal and monetary policy in collaboration with the central bank to reduce the expansionary or contractionary gap.
Passive Policy
On the other hand, the pundits of passive policy assumes that the current position of economy is quite stable such that the market forces can better interact with each other to achieve the equilibrium in the economy due to the presence of automatic stabilizers in the economy.
Strengths of Active Approach
Active policy is quite famous among the policymakers due to the fact that by apply this approach the economy can be steered to a particular direction in quick times. The active policy is mainly utilized by the existing presidents just before the elections in order to gain some short term advantages so that their chances of being elected for the next tenure can be increased. Another important strength of this approach is that generally this approach is presented to the public in a very decent manner by the central bank and the government, but in reality, both these institutions heavily emphasize on the passive approach which is the core tool behind stabilizing the economy after recessions. This policy can provide its best of the results when some sheered expert policymakers are given the command to formulate a policy to come out of the recession. When those policymakers sit together and think, they can use active policy as their premier tactic which can bring stability to the economy.
Weaknesses of Active Approach
The weaknesses of this policy mostly wipe out the strengths of active policy because of considerable difficulties which arises when this policy is to be formulated. The biggest weakness of this policy is the difficulty in estimating the future output level of the economy and the unemployment rate. Both these factors are hard to foresee and identify under this approach. Another important weakness of this policy comes at developing this policy as it requires both the government and central bank to collaborate. There are different problems pertaining to various lags for active policy including recognition, decision-making, implementation and effectiveness lags. Active police is highly dependent upon the predicted estimates of passive policy for Aggregate Demand and Aggregate Supply. The uncertainty regarding the effect of this policy is also another weakness of this approach.
Conclusion
If government plans to fulfill its responsibilities by adopting the active policy for output growth and unemployment rate, it has to bring expert policymakers together who can formulate such a policy because the identification of potential output growth and economy’s unemployment rate need some real expertise in judging them.
References
SparkNotes Editors. “SparkNote on Policy Debates.” SparkNotes.com. SparkNotes LLC. n.d. Web. 6 Apr. 2012.
The Policy Debate: Active or Passive? n.d. Web. 6 Apr. 2012. Read More
Share:
Tags
Cite this document
(“Fiscal and Monetary Policy Essay Example | Topics and Well Written Essays - 500 words”, n.d.)
Fiscal and Monetary Policy Essay Example | Topics and Well Written Essays - 500 words. Retrieved from https://studentshare.org/macro-microeconomics/1592958-fiscal-and-monetary-policy

...HOW BRITAIN SHOULD TACKLE ITS RECESSION USING THE FISCAL AND MONETARY POLICY 2000wds: November, 2008 TABLE OF CONTENTS 1 Introduction 1.2 Fiscal Policy 1.3 Monetary Policy 1.4 Fighting the Recession using Fiscal Policy 1.5 Fighting the Recession Using Monetary Policy 1.6 Conclusion and the Way Forward 1.0 Introduction The goals of monetary policy are a low rate of inflation ("price stability") and a small gap between actual real GDP and potential real GDP (Farinha & Marques 2001). Inflation can be maintained at low levels by limiting the amount of money in circulation, that is, by sufficiently limiting the growth in the broad monetary aggregate over a long enough period. (Farinha & Marques 2001...
10 Pages(2500 words)Essay

... Task: Fiscal and monetary policy theories and application Fiscal policy entails the processes through which the government achieves major economic goals through taxes and government spending. The government collects tax and spends it to achieve economic development. Taxation is one of the key avenues though which governments collect revenues from local and foreign residents. Three main aspects that make up fiscal policy include consumption, investment and government spending. In this sense, the government relies on the three aspects of demand to achieve desired economic goals. The desired economic goals include full employment, price stability, economic growth, and maintenance of a favorable balance of payment, The three aspects add...
5 Pages(1250 words)Essay

...﻿ Table of Contents The Japan Case 7 References 10 This paper differentiates between fiscal and monetary policies, and applies both in the context of a country in recession, in this case Japan. As the US Federal Reserve System Board of Governors notes, monetary policy is within the realm of control of central banking systems, while fiscal policies that shape monetary policy are outside the control of the central banks, and are entirely in the hands of the legislative branches of government and of the executive branches, in this latter case Congress and the White House working together. The object of monetary policy is the stabilization of macroeconomic fundamentals, such as those relating to stable prices, stable growth rates...
5 Pages(1250 words)Essay

Former Presidents of the United States have been permitted to engage in foreign policy initiatives, even though technically such actions violate the 1799 Logan Act. However, the lack of successful prosecutions, or even indictments, is not in itself unusual given the legal and political convention surrounding the Act itself. For example, few non-Presidents have been charged in the two hundred years since the Logan Act was passed by Congress. As such, the Act appears to be designed more as a preventative measure, something designed to stop political or diplomatic excess by private citizens, rather than a statute with any actual teeth. Consequently, former Presidents have been allowed to engage quite freely in the diplomatic sphere w...
6 Pages(1500 words)Essay

To ensure that the education sector is diversified it is seen that in the United States of America many such policies have been implemented. In 1970s diversity was considered an important tool by the educational experts so that they could help students understand each other. The board of education of North Carolina then formulated a scheme for students through which they could practice a diversity of races in schools. This was known as the North Carolina Wake County Busing Policy which was functional till the late twenty-first century. It was now in July 2010 that the issue was raised again by the educational board members who then decided to scrap the policy of diversity with community-based schools. (Liane Membis 2010; Stacy Tei...
7 Pages(1750 words)Case Study
sponsored ads
Save Your Time for More Important Things
Let us write or edit the essay on your topic "Fiscal and Monetary Policy" with a personal 20% discount.
GRAB THE BEST PAPER

Let us find you another Essay on topic Fiscal and Monetary Policy for FREE!