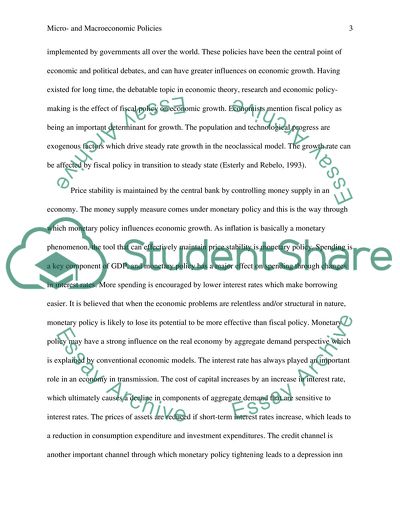 Download file to see previous pages Literature has shown both the policies have relative influence on economic growth (Ajisaf and Folorunso, 2002). The purpose of this paper is to analyze the impact of monetary and fiscal policies on economic growth. Various studies reveal while money supply has a positive impact on economic growth performance, the choice of inflation rate has no substantial impact on economic growth performance or GDP growth rates. This paper also highlights the implications of the great recession of 2008-2009 on microeconomic theory and policy.
In general, both fiscal and monetary policies look for attaining relative macroeconomic stability by maintaining stable prices and ensuring controlled inflation. Various studies show that that monetary policy alone is not capable enough to control inflation, and therefore, it should be supported by other fiscal, non monetary and non fiscal measures. Fiscal measures are extremely efficacious to control government expenditure, public and private investment, and personal consumption expenditure. Policies for taxation and public spending are formulated and implemented by governments all over the world. These policies have been the central point of economic and political debates, and can have greater influences on economic growth. Having existed for long time, the debatable topic in economic theory, research and economic policy-making is the effect of fiscal policy on economic growth. Economists mention fiscal policy as being an important determinant for growth. The population and technological progress are exogenous factors which drive steady rate growth in the neoclassical model. The growth rate can be affected by fiscal policy in transition to steady state (Esterly and Rebelo, 1993).
Price stability is maintained by the central bank by controlling money supply in an economy. The money supply measure comes under monetary policy and this is the way through which ...Download file to see next pages Read More
Share:
Tags
Cite this document
(“Discuss how demand-side policies and supply-side policies can be used Essay - 1”, n.d.)
Retrieved from https://studentshare.org/macro-microeconomics/1587523-discuss-how-demand-side-policies-and-supply-side-policies-can-be-used-to-stimulate-economic-growth

“Discuss How Demand-Side Policies and Supply-Side Policies Can Be Used Essay - 1”, n.d. https://studentshare.org/macro-microeconomics/1587523-discuss-how-demand-side-policies-and-supply-side-policies-can-be-used-to-stimulate-economic-growth.
Comments (0)
Click to create a comment or rate a document

he issues include inter-firm relations, trans-nationalization, regional culture, various production systems, regional culture, flows of knowledge through social networks, closely tied personal and business lives, embeddedness in surrounding society, external control and ownership, and contractual relations. Boundaries are demarcations of the firm’s structure that comprises an organization. All the above make demarcation of a firm difficult to ascertain. Boundaries are important in defining how and when things are done in the firm and establish rules and norms for inclusion or seclusion. It also determines parameters of organizational influence depending on the degree of the sector and its power over external influences. This...
6 Pages (1500 words) Essay

One of the major policies undertaken by the British Government in the last two years was fiscal decentralization. The government has taken steps to ensure that improvement is made in the country’s...
7 Pages (1750 words) Coursework
sponsored ads
Save Your Time for More Important Things
Let us write or edit the essay on your topic "Discuss how demand-side policies and supply-side policies can be used to stimulate economic growth" with a personal 20% discount.
GRAB THE BEST PAPER

Let us find you another Essay on topic Discuss how demand-side policies and supply-side policies can be used to stimulate economic growth for FREE!