The spanish company ZARA, is an example of globalization;how and why - Essay Example

Comments (0)
Add to wishlistDelete from wishlist
Cite this document
Summary
Global marketing has been attracting growing importance in recent years and this has in fact profoundly affected the people, companies, management and…
Download full paperFile format: .doc, available for editing
HIDE THIS PAPERGRAB THE BEST PAPER95.4% of users find it useful 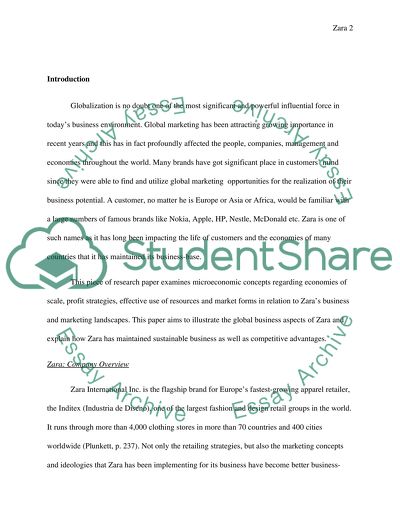 Extract of sample "The spanish company ZARA, is an example of globalization;how and why"

Download file to see previous pages Zara is one of such names as it has long been impacting the life of customers and the economies of many countries that it has maintained its business-base.
This piece of research paper examines microeconomic concepts regarding economies of scale, profit strategies, effective use of resources and market forms in relation to Zara’s business and marketing landscapes. This paper aims to illustrate the global business aspects of Zara and explain how Zara has maintained sustainable business as well as competitive advantages.
Zara International Inc. is the flagship brand for Europe’s fastest-growing apparel retailer, the Inditex (Industria de Diseno), one of the largest fashion and design retail groups in the world. It runs through more than 4,000 clothing stores in more than 70 countries and 400 cities worldwide (Plunkett, p. 237). Not only the retailing strategies, but also the marketing concepts and ideologies that Zara has been implementing for its business have become better business-model and academically significant strategies. Zara runs more than 200 kids shops in some 75 countries, and sells women’s, men’s and children’s apparel to its customers worldwide. (Yahoo Finance, 2011).
As Tamer (p. 484) noted, Zara has emerged to be the leader in rapid-response retailing. Its in-house teams for designing and manufacturing its products produce fresh designs twice a week. The total turn-around time at Zara is just two weeks whereas its competitors have typically an 11-month lead time to move a garment from design to manufacturing. One of the main success factors that helped Zara achieve greater reputation and long term sustainable competitive advantage is that it has always been very fast and flexible in meeting market needs by integrating design, production, distribution and sales through out its own stores.
The supply chain system of Zara International Inc is also lightning ...Download file to see next pagesRead More
Share:
Tags
Cite this document
(“The spanish company ZARA, is an example of globalization;how and why Essay”, n.d.)
Retrieved from https://studentshare.org/macro-microeconomics/1580372-the-spanish-company-zara-is-an-example-of-globalizationhow-and-why

(The Spanish Company ZARA, Is an Example of globalization;How and Why Essay)
https://studentshare.org/macro-microeconomics/1580372-the-spanish-company-zara-is-an-example-of-globalizationhow-and-why.

“The Spanish Company ZARA, Is an Example of globalization;How and Why Essay”, n.d. https://studentshare.org/macro-microeconomics/1580372-the-spanish-company-zara-is-an-example-of-globalizationhow-and-why.
Comments (0)
Click to create a comment or rate a document

CHECK THESE SAMPLES OF The spanish company ZARA, is an example of globalization;how and why

However, earlier in the story Spunk has had an altercation with his girlfriends' husband, Joe Kanty and Spunk kills him: "Ah didn’t wanna shoot him but he made me do it" (p. 29). Lena Kanty, the subject of the altercation had been married to Joe for a long time. The people in town made Spunk a legend in that he took nothing from anyone around the town. Most people were afraid of him and like "Bad, Bad Leroy Brown" in the song by Jim Croce, Spunk takes over the town until he meets his match. Spunks match just happens to be the dead spirit of Joe Kanty. Although this short story is very short, there are many elements of black culture that Hurston has written into it for the discerning reader.

The concept of globalization encompasses theories beyond the traditional view that global corporations merely do business abroad....
7 Pages(1750 words)Coursework
sponsored ads
Save Your Time for More Important Things
Let us write or edit the essay on your topic "The spanish company ZARA, is an example of globalization;how and why" with a personal 20% discount.
GRAB THE BEST PAPER

Let us find you another Essay on topic The spanish company ZARA, is an example of globalization;how and why for FREE!