Comments (0)
Add to wishlist Delete from wishlist
Cite this document
Summary
From the essay "Arbitration of Investment Disputes - A Turkish Perspective" it may be concluded that Turkey adopted incentive system for attracting more foreign investment in the manufacturing sector and energy sector and also to encourage export-related activities…
Download full paper File format: .doc, available for editing
HIDE THIS PAPERGRAB THE BEST PAPER97.2% of users find it useful 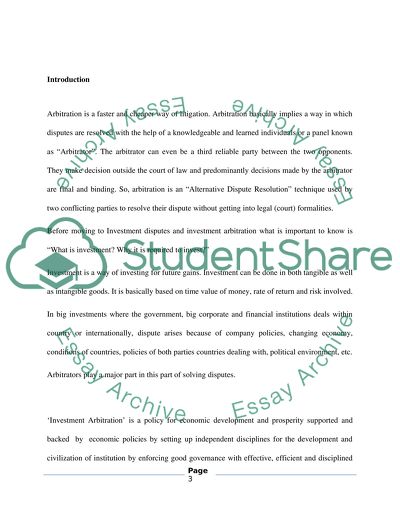 Extract of sample "Arbitration of Investment Disputes - A Turkish Perspective"

Download file to see previous pages The arbitrator can be a third reliable party between the two opponents. They make a decision outside the court of law and predominantly decisions made by the arbitrator are final and binding. So, arbitration is an “Alternative Dispute Resolution” technique used by two conflicting parties to resolve their dispute without getting into legal (court) formalities.
In big investments where the government, big corporate and financial institutions deals within country or internationally, dispute arises because of company policies, changing e theonomy, conditions of countries, policies of both parties countries dealing with, political environment, etc.
‘Investment Arbitration’ is a policy for economic development and prosperity supported and backed by economic policies by setting up independent disciplines for the development and civilization of institution by enforcing good governance with effective, efficient and disciplined economic reforms which ultimately results in better investment conditions and environment and development of policies for investors protection. 1
So, arbitration of investment dispute is a perfect path of resolving an international dispute among two opponent parties with the help of an arbitrator for the quick decision, it may be between two individuals or individual with the government, financial institutions, corporate or any two parties.
The primary source for information for investment arbitration is regional and bilateral investment treaties which are according to United Nation Conference on Trade and Development (UNCTAD). Till now there are 2,500 treaties and it is increasing by 50 to 100 in numbers every year. This is primarily because of the growing number of law firms.
IISD is an authorized institution for reviewing and revising the main rules of arbitration. ...Download file to see next pages Read More
Share:
Tags
Cite this document
(“Arbitration of Investment Disputes - A Turkish Perspective Essay”, n.d.)
Arbitration of Investment Disputes - A Turkish Perspective Essay. Retrieved from https://studentshare.org/macro-microeconomics/1567695-arbitration-of-investment-disputes-a-turkish-perspective

“Arbitration of Investment Disputes - A Turkish Perspective Essay”, n.d. https://studentshare.org/macro-microeconomics/1567695-arbitration-of-investment-disputes-a-turkish-perspective.
Comments (0)
Click to create a comment or rate a document

CHECK THESE SAMPLES OF Arbitration of Investment Disputes - A Turkish Perspective

The purpose of this report is to determine the “best bang for the buck” if a consumer was looking to purchase a small sports car. A car purchase should be treated as an investment, even though we know that spending money on a vehicle with the high gasoline prices and insurance premiums is probably the worst type of investment money can buy. Therefore, the ultimate purpose is to guide this expenditure in reaping the maximum benefits available.
I will be researching on 2006 2-seated vehicles in the price range of $30,000 - $50,000 in today’s market. The idea is to keep it within the price range mentioned above, so more expensive cars such as Benz CLK and lower-end vehicles such as Honda Civics are not included...
12 Pages (3000 words) Research Paper

Towards Inclusion: an Australian Perspective

Looking at the Australian and other viewpoints from extant literature, the current report seeks to form cohesion from disparate sources on the issue of inclusion programs, with the basic assumption that these programs are of value, primarily because they help the student with special needs to develop socially.
The topic of the current investigation is the inclusion of special education students in mainstream classrooms. From the 20th century onward, there has been more of a focus and emphasis on inclusion programs and mainstream programs, in Australia as elsewhere in the modern Western world. These programs include special education students as a part of the mainstream classroom so that they are integrated with their pe...
8 Pages (2000 words) Assignment

Self-sensation is one of the basic human characteristics and humans develop it in the earliest stages of life. It is an awareness of those characteristics that form the personality of an individual. A child starts to realize the circumstances around him and begins to perceive different relations in a specific way. Self-sensation means to perceive and observe different behaviors of people. It is very difficult to change the self-sensation of a person in the later stages of life. Scientists, who have done research in this field, also believe that self-sensation can never be changed because it is formed in the earliest stages of a person’s life. The formation of self-sensation highly depends on the interaction between the child...
7 Pages (1750 words) Assignment
sponsored ads
Save Your Time for More Important Things
Let us write or edit the essay on your topic "Arbitration of Investment Disputes - A Turkish Perspective" with a personal 20% discount.
GRAB THE BEST PAPER

Let us find you another Essay on topic Arbitration of Investment Disputes - A Turkish Perspective for FREE!