Comments (0)
Add to wishlist Delete from wishlist
Cite this document
Summary
This paper talks about the diminishing role of the labor union in the global economy of today. The reasons behind the decline of popularity of labor unions among workers are specified in the paper. The globalization proved to be a major challenge to labor unions…
Download full paper File format: .doc, available for editing
HIDE THIS PAPERGRAB THE BEST PAPER98.4% of users find it useful 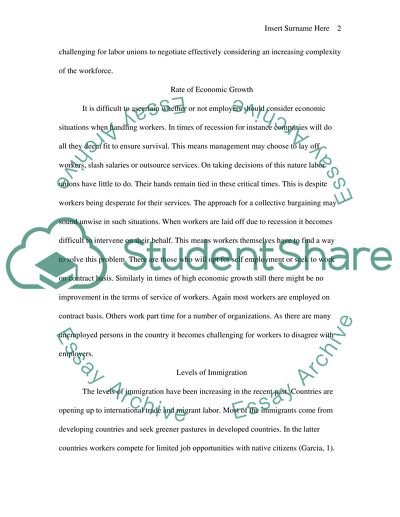 Download file to see previous pages This paper offers thorough analysis of the current situation in the labor market and the change of labor union importance in protection of rights of the workers.
Since the origin of labor unions workers are aware they are meant to be protected from the extremes of employers. It is primarily for this reason that unions were popular among workers. They negotiated for workers salary, terms of service and intervened on behalf of workers on a number of issues. Labor unions were therefore relevant and useful to workers.
Now however, fewer workers are willing to join unions. There are a number of reasons for reluctance. One of the commonest is changes in economic situations. Unions try but cannot effectively negotiate on behalf of workers during hard economic times. There is little to be done when companies lay off workers to avert effects of recession. Sometimes as in the recent economic recession companies close down without compensating workers. People lose jobs, salaries are slashed yet unions look on. The public is aware companies will lose out to competitors if all workers are to be compensated
In addition globalization is also proving a challenge to labor unions. Most companies are opening branches in remote areas where workers are paid low wages. Unionism in some of developing countries is low and workers are ignorant of their rights. Similarly there is high mobility of labor yet activities of the unions are still tied in local settings. The majority workers immigrating to other countries do not see the need to join unions.
...Download file to see next pages Read More
Share:
Tags
Cite this document
(“Impact of Economic Background Conditions on Growth of Labor Unions Essay”, n.d.)
Impact of Economic Background Conditions on Growth of Labor Unions Essay. Retrieved from https://studentshare.org/macro-microeconomics/1559862-impact-of-economic-background-conditions-on-growth-of-labor-unions

“Impact of Economic Background Conditions on Growth of Labor Unions Essay”, n.d. https://studentshare.org/macro-microeconomics/1559862-impact-of-economic-background-conditions-on-growth-of-labor-unions.
Comments (0)
Click to create a comment or rate a document

Chapter 5: Conclusions: This chapter will detail the conclusions of the research and will also include the recommendations by the researcher. The limitations of this research will also be included and further research recommendations for the same will also be included.
Human resource managers have a major impact on organizations and they hold a very responsible position. The duties of the HR managers are to ensure that the organization employs the right set of employees and there is also a good mix of skills within the organization. It is also to ensure that all the activities and processes relating to the employees are handled and completed in sync with the culture, values, and mission of the company.
The main reason to...
8 Pages (2000 words) Assignment

The concept of globalization encompasses theories beyond the traditional view that global corporations merely do business abroad....
7 Pages (1750 words) Coursework
sponsored ads
Save Your Time for More Important Things
Let us write or edit the essay on your topic "Impact of Economic Background Conditions on Growth of Labor Unions" with a personal 20% discount.
GRAB THE BEST PAPER

Let us find you another Essay on topic Impact of Economic Background Conditions on Growth of Labor Unions for FREE!